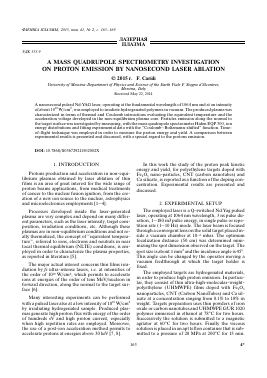 University of Messina-Department of Physics and Science of the Earth Viale F. Stagno d'Alcontres,

A nanosecond pulsed Nd:YAG laser, operating at the fundamental wavelength of 1064 nm and at an intensity of about 1010 W/cm2, was employed to irradiate hydrogenated polymers in vacuum. The produced plasma was characterized in terms of thermal and Coulomb interactions evaluating the equivalent temperature and the acceleration voltage developed in the non-equilibrium plasma core. Particles emission along the normal to the target surface was investigated by measuring, with the mass quadrupole spectrometer Hiden EQP 300, ion energy distributions and fitting experimental data with the "Coulomb-Boltzmann-shifted" function. Time-of-flight technique was employed in order to measure the proton energy and yield. A comparison between experimental results is presented and discussed, with a special regard to the protons emission.

Protons production and acceleration in non-equilibrium plasmas obtained by laser ablation of thin films is an area of great interest for the wide range of proton beams applications, from medical treatments of cancer to the nuclear fusion ignition, from the creation of a new ion source to the nuclear, astrophysics and microelectronics employments [1—4].

Processes developed inside the laser-generated plasma are very complex and depend on many different parameters, such as the laser intensity, target composition, irradiation conditions, etc. Although these plasmas are in non-equilibrium conditions and not really thermalized, the concept of "equivalent temperature", referred to ions, electrons and neutrals in near local thermal equilibrium (NLTE) conditions, is employed in order to characterize the plasma properties, as reported in literature [5].

The major actual interest concerns thin films irradiation by fs ultra-intense lasers, i.e. at intensities of the order of 1019 W/cm2, which permits to accelerate ions at energies of the order of tens MeV/nucleon in forward direction, along the normal to the target surface [6].

Many interesting experiments can be performed with a pulsed laser also at a low intensity of 1010 W/cm2 by irradiating hydrogenated sample. Produced plasmas generate high proton flux with energy of the order of hundreds eV and high proton current, especially when high repetition rates are employed. Moreover, the use of a post-ion acceleration method permits to accelerate protons at energies above 30 keV [7, 8].

In this work the study of the proton peak kinetic energy and yield, for polyethylene targets doped with Fe2O3 nano-particles, CNT (carbon nanotubes) and Ca silicate, is reported as a function of the doping concentration. Experimental results are presented and discussed.

The employed laser is a Q-switched Nd:Yag pulsed laser, operating at 1064 nm wavelength, 3 ns pulse duration, 1—180 mJ pulse energy, in single pulse or repetition rate (1—10 Hz) mode. The laser beam is focused through a convergent lens on the solid target placed inside a vacuum chamber at 10-6 mbar. The optimum focalization distance (50 cm) was determined minimizing the spot dimension observed on the target. The spot size is about 1 mm2 and the incidence angle is 45°. This angle can be changed by the operator moving a vacuum feedthrough at which the target holder is fixed.

The employed targets are hydrogenated materials, in order to produce high proton emission. In particular, they consist of thin ultra-high-molecular-weight-polyethylene (UHMWPE) films doped with Fe2O3 nanoparticles, CNT (Carbon NanoTubes) and Ca silicate at a concentration ranging from 0.1% to 10% in weight. Targets preparation uses thin powders of iron oxide or carbon nanotubes and UHMWPE GUR 1020 polymer immersed in ethanol at 78°C for two hours. Successively the solution is submitted to a magnetic agitator at 60°C for two hours. Finally the viscous solution is placed in an apt teflon container that is submitted to a pressure of 20 MPa at 200°C for 15 min.

Fig. 1. A plot of the experimental setup (a) and a scheme of the EQP detector (b).

The cooling at room temperature is controlled and happens in 30 min.

Targets can be moved vertically with the vacuum feedthrough, so that each laser shot can hit a fresh flat surface.

10~7 mbar pressure, was employed to monitor protons and carbon ions ejected from the plasma along the target normal surface, with a mass range between 1 and 300 amu. The instrument consists of four main sections: the ionisation source; the electrostatic energy filter; the mass filter; the secondary electron multiplier (SEM) detector. It measures the particles energy with an accuracy of 1 eV and plots the energy distribution in the range 1 eV—1 keV. Spectra acquisition occurs operating at 10 Hz laser repetition rate, and it is triggered with the laser shot. More details on the EQP instrument are reported in the literature [9].

An ion collector (IC) is placed horizontally along the normal to the target surface at 113 cm distance from the target. It detects ions emitted from the lasergenerated plasma. The time-of-flight (TOF) technique was employed in order to measure the ion velocity and energy and relative yields [10]. To this aim a fast storage oscilloscope, 1 GHz with 50 Q input resistance, is employed.

Figure 1a shows a plot of the experimental setup and Fig. 1b reports a scheme of the EQP detector.

where A represents the normalization constant, m is the atomic mass, E is the total energy along the normal to the target surface, EK is the adiabatic expansion energy in vacuum and EC is the Coulomb energy. Fits of the experimental ion energy data with this function take into account the temperature and the energy shifts of the distributions as a function of the ion charge state, due to the electrical field self-generated inside the plasma [12].

ed distributions, peaked at different energies depending on their charge state. For carbon ions, the maximum charge state detected is 2. In particular, protons

and carbon ions are peaked at energies of about 31 eV (H+ and C1+) and 43 eV (C2+), respectively. Along the normal to the target irradiation this energy is due to three different contributions: the first is the thermal energy, ET = 3kT/2, where k is the Boltzmann constant and T is the equivalent temperature; the second is the adiabatic expansion energy, EK =ykT/2, where Y is the adiabatic coefficient (1.67 for monoatomic species); the third contribution is EC = zeV0, where ze is the ion charge and V0 is the equivalent acceleration voltage developed inside the non-equilibrium plasma. The fit of the experimental spectrum indicates that the equivalent temperature and the acceleration voltage for pristine polyethylene plasma are 8 eV and 12 V, respectively, with an absolute error of the order of 10%.

It indicates that the equivalent tempera