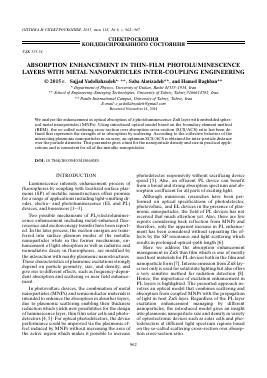 We analyze the enhancement in optical absorption of a photoluminescence ZnS layer with embedded spherical metal nanoparticles (MNPs). Using introduced optical model based on the boundary element method (BEM), the so-called scattering cross-section over absorption cross-section (SCS/ACS) ratio has been defined that represents the strength of re-absorption by scattering. According to the collective behavior of the interacting plasmonic nanoparticles in an array, an optimum SCS/ACS is obtained for inter-particle distance over the particle diameter. This parameter gives a hint for the nanoparticle density and size in practical applications and is consistent for all of the metallic nanoparticles.

Luminescence intensity enhancement process of fluorophores by coupling with localized surface plas-mons (SP) of metallic nanostructures offers promise for a range of applications including light-emitting diodes, electro- and photoluminescence (EL and PL) devices, and biosensors [1—3].

Two possible mechanisms of PL/electroluminescence enhancement including metal-enhanced fluorescence and exciton energy transfer have been reported. In the later process, the exciton energies are transferred into surface plasmon modes of the metallic nanoparticles while in the former mechanism, enhancement of light absorption as well as radiative and nonradiative decay in fluorophores, are modified by the interaction with nearby plasmonic nanostructures. These characteristics of plasmonic excitations strongly depend on particle geometry, size, and density, and give rise to different effects, such as frequency-dependent absorption and scattering or near field enhancement.

In photovoltaic devices, the combination of metal nanopartieles (MNPs) and semiconductor materials is intended to enhance the absorption in absorber layers, due to plasmonic scattering enabling their thickness reduction which yields new possibilities for the design of luminescence layer, thin film solar cells and photo-detectors [4, 5]. For optical photodetectors, the device performance could be improved via the plasmonic effect induced by MNPs without increasing the area of the active region which makes it possible to increase

photodetector responsivity without sacrificing device speed [5]. Also, an efficient PL device can benefit from a broad and strong absorption spectrum and absorption coefficient for all parts of exciting light.

Although numerous researches have been performed on optical specifications of photodetector, photovoltaic, and EL devices in the presence of plas-monic nanoparticles, the field of PL devices has not received that much attention yet. Also, there are few reports considering back reflection from MNPs and therefore, only the apparent increase in PL enhancement has been considered without separating the effects by the SP resonance and light scattering which results in prolonged optical-path length [6].

Here we address the absorption enhancement management in ZnS thin film which is one of mostly used host materials for PL devices both in the film and nanoparticle form [7]. Intense emission from ZnS layer not only is used for solid state lighting but also offers a very sensitive method for radiation detection [8]. Hence, the importance of excitation enhancement in PL layers is highlighted. The presented approach involves an optical model that combines scattering and absorption from coupled MNPs with the propagation of light in host ZnS layer. Regardless of the PL layer excitation enhancement managing by different nanoparticles, the introduced model gives an insight into plasmonic nanoparticle size and density in variety of optoelectronic devices such as solar cells and photodetectors at different light spectrum regions based on the so-called scattering cross-section over absorption cross-section ratio.

sharp boundaries [18]. In the following, at first the BEM is described in short and later, the obtained results will be discussed for Al, Ag, and Au metal nanoparticles. The analysis of the features of coupled MNPs includes the investigation of various structures such as 1D chain and 2D array (clusters of spherical particles on a substrate) in our study.

So far, modeling of MNPs has addressed aspects of particle composition [9], size, shape and dielectric environment [10—12]. In the dipolar limit, the plasmon-ic resonance wavelength is completely determined by the particle shape. However, for a certain particle shape, as the particle diameter is increased, the results considerably differ from the limiting electrostatic curve obtained in the dipole approximation. Beside the optics of individual plasmonic nanoparticles, the collective behavior of the interacting plasmonic nanoparticles is of great interest for optoelectronic applications.

Various analytical and numerical methods have been introduced to solve the Maxwell's equations to obtain the SCS and ACS of dielectric and metal nanoparticles. The most popular and simple analytical introduced method is the dipole approximation [13]. However, developed theoretical methods are required which are not limited to composition and geometrical condition due to rapid progress in demonstration of plasmonic nanostructures in the recent years. The classical Mie approach [10] also formulates light scattering and absorption by a spherical particle embedded in a homogeneous non-absorbing medium. However, to evaluate the optical absorption of an absorbing host medium, a generalization is necessary.

Particularly, the finite difference time domain (FDTD) [14], the discrete dipole approximation (DDA) [15], the finite element method (FEM) [16], the multiple multipole method [10], the Method of Moments (MoM), or themultiple scattering method [17] are some of the most famous numerical methods. BEM is another solution method which presents results with considerably good agreement with experimental data. The BEM is specially a suitable approach for homogeneous and isotropic dielectric environments, where the embedded bodies are separated by

Figure 1 illustrates a scheme of MNPs-embedded ZnS film which is under the illumination for excitation. Upon exciting the MNPs with an incident electromagnetic radiation, nanoparticles become polarized. Nanoparticles have been considered in our model through local and isotropic dielectric functions £ j(ro) which are separated by sharp boundaries, dVj. Also, Maxwell's equations are assumed in frequency space ro, and the magnetic permeability is set to ^ = 1 [12]. The well-known scalar and vector potentials ^(r) and A(r) are related to the electromagnetic fields with the following relations

where k, c are the wave number and speed of light in vacuum, respectively. Green function is then set for the Helmholtz equation through

This a j, hj ,^ext, and Aext are surface charge, current distributions, the scalar and vector potentials characterizing the external perturbation, respectively in the above relations. Based on the introduced potentials, the absorption, scattering and extinction cross sections of the MNPs will be obtained as follows [12]:

where nb, n, Einc, Binc, and 3Q are the background refractive index, unit vector in the direction of the scattering, the electric field and magnetic field of the incident plane wave, and the surface area, respectively. The transmitted light intensity through the film with a

density of N (m ~3) of embedded 15 nm radius MNPs and thickness H is obtained as follows:

corresponds to the absorption by the MNPs and the scattered power by the MNPs, which will be re-absorbed by the host material. The fraction

of absorbed power indicates the absorption in the host material.

Figure 2 shows the absorption and scattering spectra calculated by BEM theory for Au, Al, and Ag MNPs in the host ZnS with the particle diameter d considered as study param