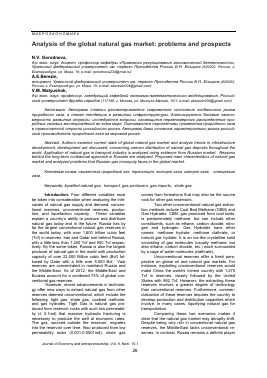 ﻿Analysis of the global natural gas market: problems and prospects

Introduction. Four different variables must be taken into consideration when analyzing the intricacies of natural gas supply and demand: conventional reserves, unconventional reserves, production, and liquefaction capacity. These variables explain a country's ability to produce and distribute natural gas today and in the future. Russia has by far the largest conventional natural gas reserves in the world today, with over 1,600 trillion cubic feet (Tcf) in reserves. Iran and Qatar trail behind Russia, with a little less than 1,200 Tcf and 900 Tcf respectively. By the same token, Russia is also the largest producer of natural gas in the world with production capacity of over 22,000 Billion cubic feet (Bcf) followed by Qatar with a little over 5,000 Bcf. Vast reserves are concentrated in mainland Russia and the Middle-East. As of 2012, the Middle-East and Eurasia account for a combined 73% of global conventional gas reserves.

However, recent advancements in technology offer new ways to extract natural gas from other reserves deemed unconventional, which include the following: tight gas, shale gas, coalbed methane, and gas hydrates. Tight Gas is natural gas produced from reservoir rocks with such low permeability (< 0.1md) that massive hydraulic fracturing is necessary to produce the well at economic rates. The gas, sourced outside the reservoir, migrates into the reservoir over time. Also produced from low permeability rocks (0.001-0.0001md), shale gas

comes from formations that may also be the source rock for other gas reservoirs.

Two other unconventional natural gas extraction methods include Coal Bed Methane (CBM) and Gas Hydrates. CBM, gas produced from coal beds, is predominately methane, but can include other constituents, such as ethane, carbon dioxide, nitrogen and hydrogen. Gas Hydrates have other names: methane hydrate, methane clathrate, or natural gas hydrate. It is an ice-like crystalline solid consisting of gas molecules (usually methane, but also ethane, carbon dioxide, etc.) each surrounded by a cage of water molecules (clathrate).

Comparing these two scenarios makes it clear that the natural gas market may abruptly shift. Despite being very rich in conventional natural gas reserves, the Middle-East lacks unconventional reserves. In contrast, Russia remains a definite player

in the market due especially to its rich Artic Shelf reserves which will discuss further below. Two cases illustrate technological advancements in unconventional reserves: the Russian Arctic Shelf and the Brazilian Pre-Salt.

Russian Arctic Shelf. The Arctic Circle region's rich oil and natural gas reserves split in territories belonging to eight different nations - Canada, Denmark/Greenland, Finland, Iceland, Norway, Russia, Sweden, and the United States. Approximately 61 large oil and natural gas fields have been discovered so far within the Arctic Circle — 43 are in Russia, 11 in Canada, 6 in Alaska and 1 in Norway [1].

Challenges to the exploitation of natural resources in the Arctic Shelf include a harsh climate, limited existing infrastructure, conventional and unconventional gas competition, long project lead times, environmental concerns over spill containment and spill recovery, overlapping sovereignty claims, and country specific regulation. However difficult it may seem, Russia is developing the means necessary to explore these resources now. President Putin reaffirmed his intention to push forward with this project in an address to industry workers in 2014. He said, "Today, oil and gas industry workers face a number of important tasks. Among them are the diversification of export flows, the development of promising new fields, the creation of modern clusters for processing and transportation of raw materials, the large-scale programs of the Arctic shelf development, the introduction of high-tech equipment and high environmental standards." [2].

The Arctic Shelf reserves prove that Russia should remain an important global gas player even when factoring in unconventional reserves. To remain competitive, Russia needs to invest in infrastructure. Although it already possesses a vast outlet of natural gas distribution pipelines, Russia still lacks the resources to liquefy and transport gas via alternative routes such as gas tankers.

Background and conditions of the global LNG market. Global gas production leads the worldwide energy industry. This is due to a variety of factors, ranging from good consumer characteristics, environmental properties, and high resource security. Natural gas is widely used in power generation and the industrial sector, especially in view of the possibility of reducing emissions and greenhouse gases respectively accounting for 35% and 40% of world gas consumption [3].

Liquefied natural gas has become more widespread in the world recently. For many countries, remote areas have the most favorable conditions for producers of natural gas. LNG offers a means of addressing the delivery of its gas to these potentially lucrative markets. Remote consumers also allow LNG to diversify the directions and volumes of supplies. In light of the tight binding of a natural gas pipeline infrastructure, LNG allows a region's economy to insure itself from failures in the

face of rising demand. In addition, LNG is the only alternative pipeline for many countries with complex geographical factors.

World LNG trade from 1970 annually grows 3 times faster than export deliveries of natural gas networks. On average, between 1970 and 2007 the annual increase in world LNG trade amounted to 6.5-7.0% from 2.3-2.6% growth of exports of natural gas network. In 2014, but, in two prior years, the growth of the LNG market was stagnant due to a decrease in demand for LNG because of the slowdown in the global economy.

LNG is also characterized by the upward trend: in 1970 it stood at 6.6% of, and currently represents 30%. Growth not only characterizes the international LNG trade, but also the geography of production and consumption of the energy carrier.

Today, the largest LNG exporter in the world is Qatar, with 77.2 million tons per annum followed by Malaysia, Australian, Indonesia and Nigeria. Historically, the Asia Pacific region has been the world's most important source of LNG. Yet Middle Eastern exports have surpassed Asia Pacific exports since 2006. This growth is largely due to developments in Qatar, where liquefaction capacity surged from 25.5 MTPA in 2006 to 77.0 MTPA in 2011 [4].

LNG exports shifted drastically after the investment in new technology and improved installed capacity not only in Qatar but also and Nigeria and other African nations such as Algeria, Angola, Egypt, and Equatorial Guinea. In 2013, the Middle East supplied 42% of the world's LNG (98.5 MT), while the Asia Pacific region supplied 30% (70.9 MT). Volumes from Nigeria, Equatorial Guinea, Algeria, Egypt and most recently Angola, made Africa the third-largest LNG producing region in 2013, accounting for 15% (34.8 MT) of global exports [4].

Some important variables in this market that can define how competitive a country can be. In addition to natural reserves, either conventional or unconventional, each exporting country must have the technology and installed capacity to properly operate in the market. In such context, South America presents a curious case. Both Argentina and Brazil, as noted before, retain large amounts of unconventional reserves. After China and the Uni