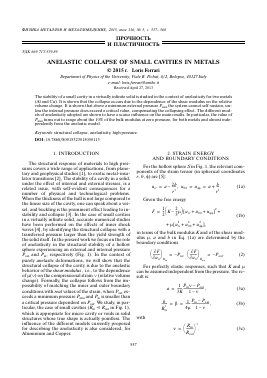 The stability of a small cavity in a virtually infinite solid is studied in the context of anelasticity for two metals (Al and Cu). It is shown that the collapse occurs due to the dependence of the shear modulus on the relative volume change. It is shown that above a minimum external pressure Pmin the system cannot self-sustain, unless the internal pressure does exceed a critical value, compensating the collapsing effect. The different models of anelasticity adopted are shown to have a scarce influence on the main results. In particular, the value of Pmin turns out to range about the 10% of the bulk modulus at zero pressure, for both metals and almost independently from the anelastic model.

The structural response of materials to high pressures covers a wide range of applications, from planetary and geophysical studies [1], to exotic metal-insulator transitions [2], The stability of a cavity in a solid, under the effect of internal and external stresses, is a related issue, with self-evident consequences for a number of physical and technological problems. When the thickness of the hull is not large compared to the linear size of the cavity, one can speak about a vessel, and buckling is the prominent effect leading to instability and collapse [3]. In the case of small cavities in a virtually infinite solid, accurate numerical studies have been performed on the effects of inner shock waves [4], by identifying the structural collapse with a transferred pressure larger than the yield strength of the solid itself. In the present work we focus on the role of anelasticity in the structural stability of a hollow sphere experiencing an external and internal pressure Pout and Pin, respectively (Fig. 1). In the context of purely anelastic deformations, we will show that the structural collapse of the cavity is due to the anelastic behavior of the shear modulus , i.e., to the dependence of v) on the compressional strain v (relative volume change). Formally, the collapse follows from the impossibility of matching the inner and outer boundary conditions with real values of the strain, when Pout exceeds a minimum pressure Pmin and Pin is smaller than a critical pressure dependent on Pout. We study, in particular, the case of small cavities (Rin <§ Rout in Fig. 1), which is appropriate for micro cavity or voids in solid structures whose true shape is actually pointless. The influence of the different models currently proposed for describing the anelasticity is also considered, for Aluminium and Copper.

For the hollow sphere S in Fig. 1, the relevant components of the strain tensor (in spherical coordinates r, 0, are [5]:

Given the free energy

in terms of the bulk modulus K and of the shear modulus a and b in Eq. (1a) are determined by the boundary conditions

For perfectly elastic responses, such that K and ^ can be assumed independent from the pressure, the result is:

the boundary conditions (2) yield, after some elementary algebra:

where the choice between the two solutions of each equation has been made in order that the limits K ^ 0 and | ^ 0 do recover the perfectly elastic expressions Eq. (3). For Pout > 0, Eq. (5a) has a real solution in any

Fig. 1. Equatorial section of the hollow sphere with a concentric cavity and external (-Pout) and internal (Pjn) pres-

When the pressure exceeds the yield strength value, the dependence of the elastic moduli on the pressure cannot be neglected anymore. For a theoretical description, it is convenient to define the relative change of volume (Eqs. (1a), (3)):

and express the bulk and shear modulus K, | as functions of v. The models proposed for the functional expressions K( v) and |( v) will be discussed in Section 3. For the moment, we simply write down the general form of the equations, with special reference to the small cavity case v <§ 1 (Eq. (3c)). On setting

despite | is negative in turn. The condition (6a) corresponds to the impossibility of the system to maintain its structural equilibrium. In practice, under such condition the cavity collapses, due to the anelastic behavior of the shear modulus

Several possible models, based on semi-empirical arguments and leading to different responses at extremely high pressures, have been proposed for expressing K( v) and |( v) as functions of the relative volume change v (recall Eq. (4)). For K( v) we make reference to ref. [6], in which five expressions are reported and compared. In order to test the dependence of the results on the model, we have choosen the "hardest" and the "softest" one, i.e., the Birch-Mur-naghan (B-M) [7] and the Poirier-Tarantola (P-T) [8] model, respectively:

As far as | (v) is concerned, there are models for extremely high pressures, at which metals are argued to become liquid at any temperature, due to the vanishing of | [9], and models valid for more moderate pressures [10, 11] at which, in contrast, |(v) is expected to in-

where 0, a, q are numerical constants depending on the metal under consideration. In Table 1, we report the values of the phenomenological parameters entering Eqs. (7) and (8) for Al and Cu. The double set of values for 0, a and q follows from two different best-fit procedures [11, 12].

Eqs. (5b) and (6a) to calculate A (Pin, Pout). Combining the double choice for K( v) (Eq. (7)) with the double set of phenomenological parameters reported in Table 1, one has four possible results for each metal.

Figure 2a shows a typical 3 dimensional plot of A (Pin, Pout), as a function ofPin and Pout. The intersection with the plane A (Pin, Pout) = 0 turns out to be a straight line, to a very good approximation. This is not surprising, indeed, since Eq. (6) yield, for the collapse conditions:

where |n(Pout)l (Eq. (6b)) depends itself on Pout, trough Eq. (5a). The equality in Eq. (9b) is actually the equation for Pmin, that has been solved numerically. However, |n (Pout) l increases logarithmically with Pout, as shown in Fig. 2b, so that the r.h.s. of the inequality (9a) tends rapidly to a straight line of angular coefficient 1. Table 2 shows the values of Pmin/K(0) for the different model options indicated and for the two metals Al and Cu. It is seen that the values range between 0.075 and 0.150, which shows that the order of magnitude of Pmin is about 10% of K(0) and that the model of anelasticity chosen involves a factor of 2, at most, almost independent from the metal. In fact, all plots referring to the different models and metals are very similar to those in Fig. 2 and have not been reported for brevity.

In the present paper we have studied the instability of small cavities in virtually infinite solids (metals, in particular), for which the elastic instability caused by buckling is negligible. In this case, the collapse of the ideal structure is anelastic in nature and is due to the dependence of the shear modulus v) on the relative volume change v. Numerical calculations have been performed for Al and Cu, adopting the "hardest" and "softest" models of anelasticity proposed ( [7] and [8], respectively), with different best-fitted sets of phe