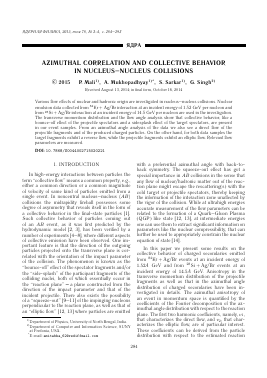 Various flow effects of nuclear and hadronic origin are investigated in nucleus—nucleus collisions. Nuclear emulsion data collected from 84 Kr + Ag/Br interaction at an incident energy of 1.52 GeV per nucleon and from 28Si + Ag/Br interaction at an incident energy of 14.5 GeV per nucleon are used in the investigation. The transverse momentum distribution and the flow angle analysis show that collective behavior, like a bounce-off effect of the projectile spectators and a sidesplash effect of the target spectators, are present in our event samples. From an azimuthal angle analysis of the data we also see a direct flow of the projectile fragments and of the produced charged particles. On the other hand, for both data samples the target fragments exhibit a reverse flow, while the projectile fragments exhibit an elliptic flow. Relevant flow parameters are measured.

In high-energy interactions between particles the term "collective flow" means a common property, e.g., either a common direction or a common magnitude of velocity of same kind of particles emitted from a single event. In noncentral nucleus—nucleus (AB) collisions the midrapidity fireball possesses some degree of asymmetry that reveals itself in the form of a collective behavior in the final-state particles [1]. Such collective behavior of particles coming out of an AB event, as it was first predicted by the hydrodynamic model [2, 3], has been verified by a number of experiments [4—8], where different aspects of collective emission have been observed. One important feature is that the direction of the outgoing particles projected onto the transverse plane is correlated with the orientation of the impact parameter of the collision. The phenomenon is known as the "bounce-off" effect of the spectator fragments and/or the "side-splash" of the participant fragments of the colliding nuclei, both of which essentially occur in the "reaction plane" — a plane constructed from the direction of the impact parameter and that of the incident projectile. There also exists the possibility of a "squeeze-out" [9—11] of the impinging nucleons perpendicular to the reaction plane, as well as that of an "elliptic flow" [12, 13] where particles are emitted

2)Department of Computer and Information Science, SUNY at Fredonia, USA.

with a preferential azimuthal angle with back-to-back symmetry. The squeeze-out effect has got a special importance in AB collisions in the sense that any flow of nuclear/hadronic matter out of the reaction plane might escape the rescattering(s) with the cold target or projectile spectators, thereby keeping the information of the interaction zone unaffected by the vigor of the collision. While at ultrahigh energies accurate measurement of the flow parameters can be related to the formation of a Quark—Gluon Plasma (QGP) like state [12, 13], at intermediate energies one can use them to extract significant information on parameters like the nuclear compressibility, that can further be used to appropriately constrain the nuclear equation of state [14].

In this paper we present some results on the collective behavior of charged secondaries emitted from 84Kr + Ag/Br events at an incident energy of 1.52^ GeV and from 28 Si + Ag/Br events at an incident energy of 14.5^ GeV. Anisotropy in the transverse momentum distribution of the projectile fragments as well as that in the azimuthal angle distribution of charged secondaries have been investigated in details. The azimuthal anisotropy of an event in momentum space is quantified by the coefficients of the Fourier decomposition of the az-imuthal angle distribution with respect to the reaction plane. The first two harmonic coefficients, namely, v\, that characterizes the direct flow, and v2, that characterizes the elliptic flow, are of particular interest. These coefficients can be derived from the particle distribution with respect to the estimated reaction

plane, corrected for the reaction plane resolution, or from the particle correlation analysis [15, 16]. The methods should produce identical results if the azimuthal correlation between the particles results solely from their correlations with the reaction plane. Correlations that are localized in both rapidity and azimuthal angle are characteristic of high-energy partons fragmenting into jets of hadrons. Such short-range correlations may be separated from the elliptic flow by using two- and three-particle correlation analyses performed in different regions of relative pseudorapidity. In the incident energy region of a few GeV to ~10 GeV per nucleon one does not expect an exotic state like the QGP to be formed. Therefore, our main motivation is to identify the presence of collective behavior in our data, to obtain the relevant flow parameters and compare them with the values obtained from similar other experiments [17—23], so that they can subsequently be used to construct an accurate nuclear equation of state.

"Ilford G5" nuclear emulsion pellicles of dimension 9 x 3 in and of thickness 600 ¡m were exposed to a 84Kr beam of incident energy 1.52^ GeV from the Bevalac at the Lawrence Berkeley Laboratory. Pellicles of dimension 16 x 10 cm and of thickness 600 ¡m were irradiated with a 28 Si beam at an incident energy of 14.5^ GeV from the Alternating Gradient Synchrotron at the Brookhaven National Laboratory. Each emulsion plate was scanned along individual projectile tracks until either the track leads to an event or it leaves the plate. The event scanning was performed with Leitz microscopes under a total magnification of 300 x. Angle measurement, track counting, and track classification were performed under a total magnification of 1500x by using a pair of Koristka microscopes. In emulsion terminology [24, 25], the tracks emerging from an interaction are classified into the following categories.

and they possess almost the same energy per nucleon as the incident projectile. Their number in an event is denoted by nPF.

2. Shower tracks: The shower tracks are caused by the singly-charged particles produced in an interaction that are moving with a relativistic speed (v > 0.7c). The ionization of this class of particles I < 1.4I0, I0 being the minimum ionization caused by any particle in the emulsion plate. In the present case I0 ~ 20 grains/100 ¡m. Mostly charged pion tracks, contaminated by a small percentage of other meson tracks, belong to the shower track category. Total number of such tracks in a single event is denoted by ns.

3. Grey tracks: The grey tracks are caused mainly by the target recoil fast protons with ionization 1.4I0 < I < 10I0. Their velocity values range between 0.3c and 0.7c, and their kinetic energies (T) range between 26 and 400 MeV. The total number of grey tracks in an event is denoted by ng.

4. Black tracks: The black tracks are due to the heavy and slow moving fragments evaporating out of the remnants of the target nuclei. Each black track has an ionization I > 10I0, velocity less than 0.3c, and T < 26 MeV. The total number of tracks of this kind in an event is denoted by nb.

To ensure that the target nucleus is either an Ag or a Br nucleus, we have chosen only those events in which the number of heavy fragments nh(= ng + + nb) > 8. In order to choose the noncentral collisions, an extra cut (nPF > 2) to the number of PFs is imposed. With the technique and criteria mentioned above, the polar (O) and the azimuthal (^>) angles of all charged particles/fragments emitted from an event are measured [24, 25], and we could build up a statistics of 190 84Kr + Ag/Br and 214 28 Si + Ag/Br events for this analysis.

The most important step for a flow analysis is to fix the reaction plane for each of the considered events. As mentioned above, the plane is defined by the direction of the projectile nucleus and the nonzero impact parameter (vector) of the events. Practically it's impossible to determine the true reaction plane of an event as the impact parameter is not a directly measurable quantity. In an alternative and commonly used technique originally suggested by [26], the event plane of an AB collision is determined by calculating the net transverse momentum of particles emitted into different hemispheres. Accordingly, an event plane is defined by the beam direction and a flow

vector, say Q, of the event. For an arbitrarily chosen ith particle, the flow vector is defined as

where Aj is the mass number of the jth PF having transverse momentum Pt,j per nucleon. The coefficient Uj introduced here is to relate the direction of the emitted fragment j to the beam direction. In the present analysis Uj is set equal to unity, as the vector is constructed out of the PFs that are emitted only in the forward direction within t