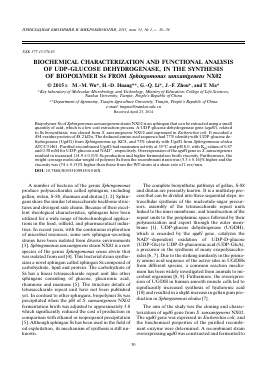 Biopolymer Ss of Sphingomonas sanxanigenens strain NX02 is an sphingan that can be extracted using a small quantity of acid, which is a low cost extraction process. A UDP-glucose dehydrogenase gene (ugdG), related to Ss biosynthesis, was cloned from S. sanxanigenens NX02 and expressed in Escherichia coli. It encoded a 454-residue protein of 48.2 kDa. The deduced amino acid sequence had 77% identity with UDP-glucose dehydrogenase (UgdG) from Sphingomonas sp. KC8, and 73% identity with UgdG from Sphingomonas elodea ATCC31461. Purified recombinant UgdG had maximum activity at 35°C and pH 8.0, with Km values of 0.47 and 0.38 mM for UDP-glucose and NAD+, respectively. Overexpression of the ugdG gene in S. sanxanigenens resulted in increased (14.9 ± 0.5)% Ss production and higher fermentation broth viscosity. Furthermore, the weight-average molecular weight of polymer Ss from the recombinant strain was (5.3 ± 0.16)% higher and the viscosity was (74 ± 0.15)% higher than those from the WT strain at a shear rate of 1 rev/min.

A number of bacteria of the genus Sphingomonas produce polysaccharides called sphingans, including gellan, welan, S-88, rhamsan and diutan [1, 2]. Sphingans share the similar tetrasaccharide backbone structures and divergent side chains. Because of their excellent rheological characteristics, sphingans have been utilized for a wide range of biotechnological applications in the food, oilfield, and pharmaceutical industries. In recent years, with the continuous exploration of microbial resources, some new sphingan-secreting strains have been isolated from diverse environments [3]. Sphingomonas sanxanigenens strain NX02 is a new species of the genus Sphingomonas sensu stricto that was isolated from soil [4]. This bacterial strain synthesizes a novel sphingan called sphingan Ss composed of carbohydrate, lipid and protein. The carbohydrate of Ss has a linear tetrasaccharide repeat unit like other sphingans consisting of glucose, glucuronic acid, rhamnose and mannose [5]. The structure details of tetrasaccharide repeat unit have not been published yet. In contrast to other sphingans, biopolymer Ss was precipitated when the pH of S. sanxanigenens NX02 fermentation broth was adjusted to approximately 3.0 which significantly reduced the cost of production in comparison with ethanol or isopropanol precipitation [5]. Although sphingan Ss has been used in the field of oil exploitation, its mechanism of synthesis is still unknown.

The complete biosynthetic pathways of gellan, S-88 and diutan are presently known. It is a multistep process that can be divided into three sequential steps: intracellular synthesis of the nucleotide-sugar precursors, assembly of the tetrasaccharide repeat units linked to the inner membrane, and translocation of the repeat units to the periplasmic space followed by their polymerization and export through the outer membrane [1]. UDP-glucose dehydrogenase (UGDH), which is encoded by the ugdG gene, catalyzes the NAD+-dependent oxidation of UDP-D-glucose (UDP-Glc) to UDP-D-glucuronic acid (UDP-GlcA), a precursor in the synthesis of many exopolysaccha-rides [6, 7]. Due to the striking similarity in the primary amino acid sequence of the active sites in UGDHs from different species, a common reaction mechanism has been widely investigated from animals to mi-crobial organisms [8, 9]. Futhermore, the overexpression of UGDH in human smooth muscle cells led to significantly increased synthesis of hyaluronic acid [10] and resulted in a slight increase in gellan gum production in Sphingomonas elodea [7].

The aim of the study was the cloning and characterization of ugdG gene from S. sanxanigenens NX02. The ugdG gene was expressed in Escherichia coli, and the biochemical properties of the purified recombinant enzyme were determined. A recombinant strain overexpressing ugdG was constructed and fermented to

analyze the putative role of UgdG in biopolymer Ss synthesis.

Cloning and sequence determination of the ugdG gene. The ugdG gene was cloned based on PCR amplification of a DNA fragment of693 bp using degenerate primers designed from the conserved regions of UGDH sequences available in the NCBI database: dGf (sense) (5'-CCSATCKWYGARCCSGGYCT-3') and dGr (antisense) (5'-CTTSGGSARGCASGARC-CGCC-3'). The complete ORF sequence of ugdG was obtained by thermal asymmetric interlaced (TAIL) PCR.

Overexpression of ugdG in E. coli and purification of

the UgdG. To overexpress the S. sanxanigenens NX02 ugdG gene in E. coli, its DNA sequence was amplified by PCR using the genomic DNA as the template, TransStart™ Fastpfu DNA polymerase (Transgen, China) and the primers ugdGf (5'-GGGCTAGC-CCGTTCCAGCAAGAGCGAAAAG-3') and ugdGr (5'-CCCAAGCTTCCGTTTCTCCGCCGTCCTAT-TAC-3'), which were also designed to introduce NheI and HindIII sites (underlined) at the 5' ends of the

ugdGf and ugdGr primers, respectively. The PCR product was digested with NheI and HindIII, then ligated in the cloning vector pET28a, generating p28dG. A sequence coding for 6 His residues preceded the ugdG gene in the p28dG vector for purification purposes. Afterwards, the p28dG plasmid was introduced into E. coli BL21 (DE3) by CaCl2 transformation [14].

E. coli transformants were cultivated at 37°C in 200 mL Lennox broth (Dingguo Limited, China) containing kanamycin until the OD600 value of the culture reached approximately 0.4. At this time, ugdG transcription was induced by the addition of 0.1 mM isopropyl-P-D-thiogalactopyranoside (IPTG), followed by an additional culture period of 4 h. Crude extracts were obtained by sonication (ultrasonic time: 5 sec, intermittent time: 10 sec, repeated the cycle 40 times) using JY92-ultrasonic cell grinder (China), followed by centrifugation at 14.000 x g for 20 min at 4°C. UgdG was overproduced as a fusion protein carrying an N-terminal His6 tag, which allowed batch purification under native conditions using a Ni-NTA agarose column as indicated in the QIA expressionist manual (Qiagen, USA). The purified fraction was immediately used for enzyme assays. The approximate molecular weight and purity of the recombinant UgdG protein were analyzed by SDS-PAGE (12%).

UgdG activity from S. sanxanigenens NX02 was assayed at 37°C in a total volume of 500 ^L 100 mM Tris-HCl buffer (pH 8.7) containing [7] 5 mM DTT, 10 mM MgCl2, 1 mM UDP-Glc and 1 mM NAD+. The reaction was initiated by the addition of the purified fraction (25 ^g protein). UGDH reduces 2 molecules of NAD+ to NADH during the conversion of the UDP-Glc substrate to UDP-GlcA. Therefore, we followed the reaction by measuring NADH absorbance at 340 nm. Control assays lacking enzyme were also performed. Temperature-dependence was established in the same buffer in the range from 15 to 50°C and pH-dependence was assayed in the range from pH 4.0 to 11.0. One unit of UGDH activity was defined as the amount of enzyme required to produce 1 ^M NADH per min. Protein concentrations were estimated by the Bradford method [15], using BSA as a standard. The kinetic constants Km and Vmax corresponding to the UGDH activity of the purified UgdG of S. sanxanigenens NX02 for UDP-Glc (range: 0-1.6 mM) or NAD+ (range: 0-1.6 mM) were directly calculated based on the Michaelis-Menten equation; the rectangular hyperbolic function was solved using iterative procedures (computer program: Solver from Microsoft Excel). Kcat values (min-1) were calculated on the basis of a molecular mass of 48.2 kDa for UgdG. The catalytic efficiency was based on the Kcat/Km ratio.

A recombinant plasmid pMMB66(EH)-ugdG, derived from the broad-host-range vector pMMB66(EH) [16], was constructed and introduced into S. sanxanigenens NX02 by electr