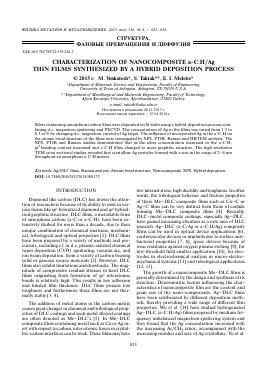 Silver containing amorphous carbon films were deposited on Si wafer using a hybrid deposition process combining d.c. magnetron sputtering and PECVD. The concentration of Ag in the films was varied from 1.3 to 8.3 at % by changing d.c. magnetron current of Ag target. The influence of incorporated Ag in the a-C:H on the atomic bond structure of the films were investigated by XPS, FTIR, Raman and HRTEM analysis. The XPS, FTIR and Raman studies demonstrated that as the silver concentration increased in the a-C:H, sp2 bonding content increased and a-C:H films changed to more graphitic structure. The high resolution TEM cross sectional studies revealed that crystalline Ag particles formed with a size in the range of 2—4 nm throughout an amorphous a-C:H matrix.

Diamond like carbon (DLC) has drawn the attention of researchers because of its ability to exist in various forms like sp3 hybridized diamond and sp2 hybridized graphitic structure. DLC films, a metastable form of amorphous carbon (a-C or a-C:H), have been extensively studied for more than a decade, due to their unique combination of chemical inertness, mechanical, tribological and optical properties [1]. DLC films have been prepared by a variety of methods and precursors, including r.f. or d.c. plasma-assisted chemical vapor deposition (CVD), sputtering, vacuum arc, and ion beam deposition, from a variety of carbon bearing solid or gaseous source materials [2]. However, DLC films also exhibit limitations and drawbacks. The magnitude of compressive residual stresses in hard DLC films originating from formation of sp3 interatomic bonds is relatively high. This results in low adhesion and limited film thickness. DLC films possess low toughness and furthermore these films are not thermally stable [3, 4].

The addition of metal atoms in the carbon matrix causes great changes in chemical and tribological properties of DLC coatings and such metal alloyed coatings are often denoted as Me-DLC's [5]. In Me—DLC composite films containing metal such as Cu or Ag inert with respect to carbon, inter-atomic forces in crystallite-carbon interfaces can be weak. These films may have

low internal stress, high ductility and toughness. In other words, the tribological behavior and friction properties of these Me—DLC composite films such as Cu—C or Ag—C films can be very distinct from those of carbide forming Me—DLC composite films [4]. Recently, DLC—metal composite coatings, especially Ag—DLC, have gained increasing attention as a new area of DLC research. Ag—DLC (a-C/Ag or a-C:H/Ag) composite films can be used in optical device applications [6], cardiovascular devices or implants due to surface antibacterial properties [7, 8], space devices because of wear resistance against oxygen plasma etching [9], for low-threshold field emitter application [10], for electrodes in electrochemical analysis in micro-electromechanical systems [11] and tribological applications [12, 13].

The growth of a nanocomposite Me—DLC films is generally determined by the design and synthesis of its structure. Deterministic factors influencing the characteristics of nanocomposite film are the content and grain size of the nano-components. Ag—DLC films have been synthesized by different deposition methods, thereby providing a wide range of different film properties. Wu et al. [14] have studied hydrogenated Ag—DLC (a-C:H/Ag) films prepared by medium frequency unbalanced magnetron sputtering system and they found that the Ag concentration increased with the increasing Ar/CH4 ratios, accompanied with the increasing number and size of Ag crystalline. Yu et al.

[15] have synthesized non-hydrogenated Ag—DLC (a-C:H/Ag) films using a mid-frequency dual-magnetron system and they reported that the Ag nanocrystal-lites were dispersed in the DLC matrix, and increasing Ag content resulted in increase of the Ag nano size. Same result was observed by Paul et al. [16]. They reported that silver nanocrystallite size increased from 10 nm to 36 nm for films deposited with increasing amount of silver in the DLC matrix. In another research, it was observed that the growth rate, surface roughness, silver content and size of silver nanoclus-ters in the Ag doped DLC film all increased with the Ag target power due to the higher flux of sputtered Ag species toward the substrate [17]. It is contemplated that embedding soft and ductile nanocrystallites in DLC may rectify the brittleness problem and increase toughness of the film. According to Yu at al. [18], Ag doped DLC films, which deposited on M2 HSS substrate using an ion beam assisted deposition (IBAD) system, had high toughness due to changing the film adhesion and impact-resistance behaviors.

In this work, the composite films were synthesized by combining d.c. plasma enhanced chemical vapor deposition (PECVD) and d.c. magnetron sputtering of Ag target. In order to characterize and obtain information about bonding environment in these films, XPS, FTIR, Raman and HRTEM analyses were used.

The substrate material used was silicon (100) wafers with thickness of 250—300 ^m and diameter of 5 cm. The substrate was first cleaned ultrasonically in acetone, dried in air and mounted on a stainless steel holder in the chamber. a-C:H (hydrogenated DLC) and a-C:H/Ag (hydrogenated Ag—DLC) films were synthesized using a hybrid Plasma CVD and magnetron sputtering process. A small surface area at the edge of each sample was masked to prevent deposition and allow film thickness measurement after processing using an optical profilometer (WYKO NT 1000). The chamber was evacuated down to 2.5 x 10-6 Torr and then purged with Ar several times. Sputter cleaning of the substrate was performed for 10 min using Ar plasma at a chamber pressure of 30 mTorr and —1000 V bias voltages.

a-C:H/Ag films were deposited by d.c. sputtering of Ag with a CH4/Ar mixture while a d.c. negative bias (—1000 V) was applied to the substrate. Ag was initially pre-sputtered on the shutter plate to establish good plasma and the shutter was opened when proper plasma was established. The vacuum pressure, d.c. bias voltage and CH4/Ar ratio during the deposition were set to around 30 mTorr, —1000 V and 10/90, respectively. The Ar concentration in the gas mixture was set to 90% to avoid poisoning of silver target during deposition. The film composition was altered by changing

d.c. magnetron current between 40 and 100 mA. A silver disc with two inches (5 cm) in diameter was used as the sputtering target. All the deposition parameters, except the applied current to the Ag targets, of the individual films were kept constant. Pure a-C:H films were prepared at CH4/Ar ratio of 70/30 without operating the sputter gun.

The compositional analysis of the a-C:H/Ag films was characterized by Scanning Electron Microscopy in conjunction with Energy Dispersive Spectroscopy (EDS). Samples were characterized at an acceleration Voltage of 20 keV. The binding energy of C atoms in the a-C:H and a-C:H/Ag films was determined using XPS. XPS surface analysis was performed with Perkin-Elmer spectrometer using Al Ka monochromatic X-ray source (1484.6 eV). The principle involves X-ray bombardment on to the sample and the kinetic energy of photo-excited core electrons is determined from the samples as a measure of their binding energy. The pressure was maintained below 10-9 Torr. The survey spectra was obtained at constant pass energy of 100 eV taken in increments of 0.5 eV with dwell times of 100 ms for 5 scans. The high resolution spectrum of each element was obtained at 50 eV pass energy taken in increments of 0.2 eV with dwell times of 100 ms for at least 200 scans. To investigate the chemical state of the C-atoms, high resolution peak spectra was obtained. Using CASA software, the peaks were deconvoluted, the amount of sp2 and sp3 in deposited thin films was determined based on their areas.

The investigation of C—H bonding in the a-C:H and a-C:H/Ag films was performed by Fourier transform infrared (FTIR) spectroscopy (Nicolet) in the range 2800—3150 cm-1. FTIR is a widely used a technique to characterize the different C-H bonding configurations in hydrogenated DLC (a-C:H) films. Bonding properties of hydrogenated DLC films can be changed by introducing the second phase such as Ag. FTIR spectrum analysis was used to investigate the change and the presence of sp2 and sp3 hybridization in the atomic bonding structure between carbon and hydrogen in the hydrogenated DLC film. The spectrum of the films was subtracted from the Si wafer background to obtain the absorbance response of the films. The resultant curve was smoothed twice using 25 point smoothing in the OMNIC software. The resulting spectrum of deposited films was deconvoluted in the regions of interest using Origin 8.6 software. Curve fitting was performed on the deconvoluted peaks in a Gaussian distribution and the area under the component peaks was noted for C-H sp3/sp2 ratio determination. Raman measurements were carried out with a laser wavelength of 532 nm. A low input power of 2.5 mW was used in order to minimize possible beam-heating effects. All bands in the Raman spectra have