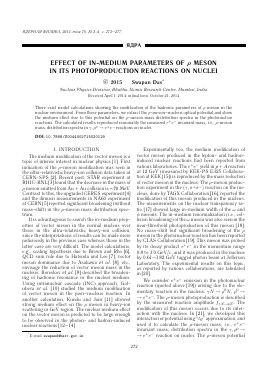 There exist model calculations showing the modification of the hadronic parameters of p meson in the nuclear environment. From these parameters, we extract the p-meson—nucleus optical potential and show the medium effect due to this potential on the p-meson mass distribution spectra in the photonuclear reactions. The calculated results reproduced reasonably the measured e+e- invariant mass, i.e., p-meson mass, distribution spectra in y, p0 — e+e- reactions on nuclei.

The medium modification of the vector meson is a topic of intense interest in nuclear physics [1]. First indication of the p-meson modification was seen in the ultra-relativistic heavy-ion collision data taken at CERN-SPS [2]. Recent past, STAR experiment at RHIC-BNL [3] found that the decrease in the mass of p meson emitted from Au + Au collision is ^70 MeV. Contrast to this, the upgraded CERES experiment [4] and the dimuon measurements in NA60 experiment at CERN [5] reported significant broadening (without mass-shift) in the p-meson mass distribution spectrum.

It is advantageous to search the in-medium properties of vector meson in the normal nucleus over those in the ultra-relativistic heavy-ion collision, since the interpretations of results can be made more judiciously in the previous case whereas those in the latter case are very difficult. The model calculations, e.g., scaling hypothesis due to Brown and Rho [6], QCD sum rule due to Hatsuda and Lee [7], vector meson dominance due to Asakawa et al. [8], etc., envisage the reduction of vector meson mass in the nucleus. Boreskov et al. [9] described the broadening of hadronic resonance in the nuclear medium. Using intranuclear cascade (INC) approach, Gol-ubeva et al. [10] studied the medium modification of vector meson in the pion—nucleus reaction. In another calculation, Kundu and Jain [11] showed strong medium effect on the p meson in heavy-ion scattering in GeV region. The nuclear medium effect on the vector meson is predicted to be large enough to be observed in the photon- and hadron-induced nuclear reactions [12—14].

Experimentally too, the medium modification of vector meson produced in the lepton- and hadron-induced nuclear reactions had been reported from various laboratories. The e+e- yield in p + A reaction at 12 GeV (measured by KEK-PS E325 Collaboration at KEK [15]) is reproduced by the mass reduction of vector meson in the nucleus. The p-meson production experiment in the (j, n+n-) reaction on the nucleus, done by TAGX Collaboration [16], reported the modification of this meson produced in the nucleus. The measurements on the nuclear transparency ratio [17] showed large in-medium width of the u and 0 mesons. The in-medium renormalization (i.e., collision broadening) of the u meson was also seen in the near-threshold photoproduction of this meson [18]. No mass-shift but significant broadening of the p meson in the photonuclear reaction has been reported by CLAS Collaboration [19]. This meson was probed by its decay product e+e- in the momentum range 0.8 to 3.0 GeV/c, and it was produced in the nucleus by 0.61—3.82 GeV tagged photon beam at Jefferson Laboratory. The experimental results on this topic, as reported by various collaborations, are tabulated in [20].

We consider e+e- emission in the photonuclear reaction (quoted above [19]) arising due to the elementary reaction in the nucleus: jN ^ p°N, p0 ^ ^ e+e-. The p-meson photoproduction is described by the measured reaction amplitude flN^pN. The modification of this meson occurs due to its interaction with the nucleus. In [21], we developed this interaction or potential using "tg" approximation, and used it to calculate the p-meson mass, i.e., e+e-invariant mass, distribution spectra in the j, p0 ^ ^ e+e- reaction on nuclei. The p-meson potential

can also be extracted from its mass-shift and collision broadening in the nucleus. Using the latter potential, we calculate the p-meson mass distribution spectra in the above reaction and present them along with the data reported from Jefferson Laboratory [19].

The differential cross section of the p-meson mass m distribution in the j, P° ^ e+e- reaction on a

where KF denotes the kinematical factor of the reaction:

VOp(h,z") is the p-meson nucleus optical potential which can modify the hadronic parameters of this meson during its passage through the nucleus. Gop(m) denotes the free space p-meson propagator: <5-1 (m) = m2 — mPp + impTp(m), where mp is the pole mass of this meson. In fact, the above form of the in-medium propagator was used to study the medium effects on the vector meson produced in the nuclear reactions [10, 11].

n7A^pA (r) in Eq. (2) represents the generalized optical potential or self-energy of the p meson which describes its production in the photonuclear reaction [21,23]:

with kp = ke+ + ke-. Ei is the total energy in the initial state. Ep and EA> are the energy of the p meson

Dkp (m; b, z', z) in this equation carries the information about the in-medium properties of p meson as it appears in the p-meson propagator, see below.

where g(r) denotes the spatial density distribution of the nucleus. This distribution is described by two-parameter Fermi distribution function for all considered nuclei except 12C, for which it is represented by the harmonic oscillator Gaussian distribution [21, 24]. flN^pN (0) is the amplitude of the jN ^ pN reaction. Its magnitude square, which appears in Eq. (1), can be extracted directly from the measured differential cross section [25]:

The symbol tilde on the quantities represents those in the pN c.m. system of energy equal to that in the jN c.m. system.

Equation (1) can be used to estimate the di ffer-ential cross section of the p°(^ e+e-)-meson mass distribution due to fixed j-beam energy EY. But the p meson, as mentioned earlier, was produced by the tagged photon beam [19] whose profile (illustrated in [26]) can be divided into six energy bins. Therefore, the cross section can be expressed as

Fig. 1. The calculated p-meson mass distribution spectra due to its potentials extracted from its mass-shift Am and collision broadening Ar (see text).

where jL is the associated Lorentz factor [28]; m and r are the mass and width of the p meson in free space. The asterisk stands for the in-medium quantities. In fact, these relations are described for the pole mass of the p meson. We assume they do not vary with the mass of this meson.

The QCD sum rule calculation due to Hatsuda and Lee [7] have predicted the linear variation of m* (r) with the nuclear density g(r). According to them, it is

On the other hand, Asakawa et al. [8], in their vector meson dominance (VMD) model calculation have shown that m*(r) varies non-linearly with g(r), i.e.,

The in-medium mass m* of the p meson, as shown by Kondratuyk et al. [28], increases with

the logarithmic increase in its momentum kp such that (i) m* ~ 0.82m at the central density of the nucleus as kp ^ 1 MeV (see Eq. (6)), and (ii) the mass-shift Am of this meson is zero at kp « 100 MeV/c. Effenberger et al. [12] have incorporated such behavior by multiplying the function

with the mass-shift (or the real part of optical potential) of the p meson. Since this form is linear in kp, it cannot reproduce kp dependence of m* as described by Kondratuyk et al. [28]. In addition, this form of f (kp) distinctly fails to satisfy the second condition stated above. To overcome these shortcomings, we propose a new form of f (kp) which duly satisfies the behavior of m* as elucidated above in (i) and (ii):