научная статья по теме EFFECTS OF FIRST-ORDER CORRECTION TO EIKONAL APPROXIMATION IN THE ANALYSIS OF BE C, C BE STRIPPING REACTION Физика 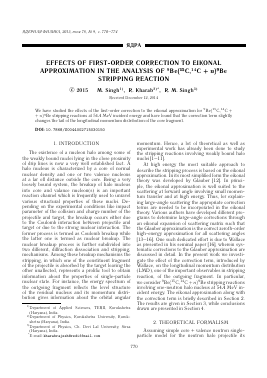 Текст научной статьи на тему «EFFECTS OF FIRST-ORDER CORRECTION TO EIKONAL APPROXIMATION IN THE ANALYSIS OF BE C, C BE STRIPPING REACTION»

We have studied the effects of the first-order correction to the eikonal approximation for 9Be(15C,14C + + n)9Be stripping reactions at 54A MeV incident energy and have found that the correction term slightly changes the tail of the longitudinal momentum distribution of the core fragment.

The existence of a nucleon halo among some of the weakly bound nuclei lying in the close proximity of drip lines is now a very well established fact. A halo nucleus is characterized by a core of normal nuclear density and one or two valence nucleons at a far off distance outside the core. Being a very loosely bound system, the breakup of halo nucleus into core and valance nucleon(s) is an important reaction channel which is frequently used to unravel various structural properties of these nuclei. Depending on the experimental conditions like impact parameter of the collision and charge number of the projectile and target, the breakup occurs either due to the Coulomb interaction between projectile and target or due to the strong nuclear interaction. The former process is termed as Coulomb breakup while the latter one is termed as nuclear breakup. The nuclear breakup process is further subdivided into two different, diffraction dissociation and stripping, mechanisms. Among these breakup mechanisms the stripping, in which one of the constituent fragment of the projectile is absorbed by the target leaving the other unaffected, represents a prolific tool to obtain information about the properties of single-particle nuclear state. For instance, the energy spectrum of the outgoing fragment reflects the level structure of the residual nucleus and its momentum distribution gives information about the orbital angular

momentum. Hence, a lot of theoretical as well as experimental work has already been done to study the stripping reactions involving weakly bound halo nuclei [1 — 11].

At high energy the most suitable approach to describe the stripping process is based on the eikonal approximation. In its most simplified form the eikonal theory was developed by Glauber [12]. In principle, the eikonal approximation is well suited to the scattering at forward angle involving small momentum transfer and at high energy. Thus, for explaining large-angle scattering the appropriate correction terms are needed to be incorporated in the eikonal theory. Various authors have developed different programs to determine large-angle corrections through an eikonal expansion of scattering matrix such that the Glauber approximation is the correct zeroth-order high-energy approximation for all scattering angles [13—16]. One such dedicated effort is due to Wallace as presented in his seminal paper [16], wherein systematic corrections to the Glauber approximation are discussed in detail. In the present work we investigate the effect of the correction term, introduced by Wallace, on the longitudinal momentum distribution (LMD), one of the important observables in stripping reaction, of the outgoing fragment. In particular, we consider 9Be(15C,14C + n)9Be stripping reactions involving one-neutron halo nucleus at 54A MeV incident energy. The eikonal approximation along with the correction term is briefly described in Section 2. The results are given in Section 3, while conclusions drawn are presented in Section 4.

ground state wave function^Lo>Mo (r), after interacting with the target, is modified as [17]

where L0 and M0 are the angular momentum of the relative motion of valence neutron and core and its projection, respectively, r is relative separation between core and halo neutron. The R is the coordinate of the center of mass of the projectile and bn and bc are the impact parameters of the neutron and core with respect to target, respectively, and are given by (Fig. 1)

Thus, the two major ingredients needed in the calculation of the LMD are the profile functions and the ground-state wave function of the projectile.

Here, R^and r^are the components of R and r, respectively, in a plane perpendicular to z direction. The Ac represents the mass number of the core fragment. The Sn (bn) and Sc (bc) are the profile functions corresponding to the neutron—target and core—target interaction, respectively.

The one-neutron stripping cross section differential in the momentum of the core (kc = kc^, kcz) is obtained by Fourier transformation of core-nucleon wavefunction corrected for core—target and nucleon— target interaction and is written as [3]

Fig. 1. Geometry of the problem.

The ground-state wave function of the projectile is written as

whose radial part RLo (r) is obtained by solving the Schrodinger equation for Woods—Saxon potential. The YLo,Mo (Q) are the well known spherical harmonics. The neutron and core profile functions Sn (bn) and Sc (bc) are generated by neutron—target and core—target interaction, respectively, and are written as

with u as the beam velocity and ViT as the nucleon— target or core—target optical potential.

Equivalently, the expression for the phase shifts may be written as

with ei = Vi0/(Ku) and Vi0 and UiT (r) are the strength and form factor for the spherically symmetric potential. The ri is the neutron—target and core— target relative separation for i = n or c. Here, K is the momentum of the projectile in the centre-of-mass frame of reference. The first eikonal correction term (Tii (bi)), which accounts for the deviations of the

Fig. 2. Variation of the magnitude of the eikonal phase (Xno) and first-order correction (r„i), arising from neutron—target (n—9Be) interaction, with the impact parameter.

target interaction with core density as

particle trajectory from the constant speed rectilinear motion, can be written in the form [16]

so that the resulting S matrices become

Here for the nucleon—target interaction the usual Woods—Saxon form is considered, while the core-target potential is obtained by folding the nucleon—

The free parameter a is adjusted to reproduce mean charge radius of the core nucleus, while the parameter p0 is kept fixed at 0.1607 fm-3. The A and Z represent the mass and proton number of core fragment, respectively.