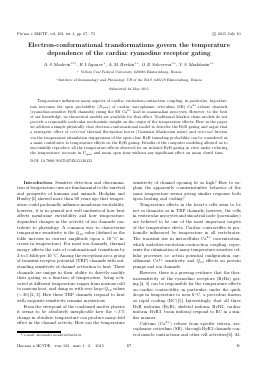 Temperature influences many aspects of cardiac excitation-contraction coupling, in particular, hypothermia increases the open probability (Popen) of cardiac sarcoplasmic reticulum (SR) Ca2+-release channels (ryanodine-sensitive RyR channels) rising the SR Ca2+ load in mammalian myocytes. However, to the best of our knowledge, no theoretical models are available for that effect. Traditional Markov chain models do not provide a reasonable molecular mechanistic insight on the origin of the temperature effects. Here in the paper we address a simple physically clear electron-conformational model to describe the RyR gating and argue that a synergetic effect of external thermal fluctuation forces (Gaussian-Markovian noise) and internal friction via the temperature stimulation/suppression of the open-close RyR tunneling probability can be considered as a main contributor to temperature effects on the RyR gating. Results of the computer modeling allowed us to successfully reproduce all the temperature effects observed for an isolated RyR gating in vitro under reducing the temperature: increase in Popen and mean open time without any significant effect on mean closed time.

Introduction. Sensitive detection and discrimination of temperature cues are fundamental to the survival and prosperity of humans and animals. Hodgkin and Huxley [1] showed more than 60 years ago that temperature could profoundly influence membrane excitability, however, it is in general not well understood how heat affects membrane excitability and how temperature-dependent changes in the activity of ion channels contribute to physiology. A common way to characterize temperature sensitivity is the Qio value (defined as the folds increase in current amplitude upon a 10 °C increase in temperature). For most ion channels, thermal energy affects the rate of conformational transitions by 2-to-5 folds per 10 °C. Among the exceptions are a group of transient receptor potential (TRP) channels with outstanding sensitivity of channel activation to heat. These channels are unique in their ability to directly modify their gating clS cl function of temperature, being activated at different temperature ranges from noxious cold to noxious heat, and doing so with very large Qio values (~30) [2, 3]. How these TRP channels respond to heat with exquisite sensitivity remains mysterious.

From the viewpoint of the condensed matter physics it seems to be absolutely inexplicable how the ~3% change in absolute temperature can produce many-fold effect in the channel activity. How can the temperature

sensitivity of channel opening be so high? How to explain the apparently counterintuitive behavior of the same temperature sensor giving similar response both upon heating and cooling?

Temperature effects in the heart's cells seem to be not so dramatic as in TRP channels, however, the cells in ventricular myocytes and sinoatrial node (pacemaker) are believed to be one of the most important targets of the temperature efects. Cardiac contractility is profoundly influenced by temperature in all vertebrates. The transient rise in intracellular Ca2+ concentration, which underlies excitation-contraction coupling, represents the culmination of many temperature-sensitive cellular processes; i.e. action potential configuration, myofilament Ca2+ sensitivity and Qio effects on protein pumps and ion channels.

However, there is a growing evidence that the ther-mosensitivity of the ryanodine receptors (RyRs) gating [4, 5] can be responsible for the temperature effects on cardiac contractility, in particular, under the quick drops in temperature to near 0 °C, a procedure known as rapid cooling (RC) [5]. Interestingly, that all three RyR isoforms (RyRl, skeletal isoform; RyR2, cardiac isoform; RyR3, brain isoform) respond to RC in a similar manner.

The RC response is most likely caused by a cooling induced conformational change in the RyR, leading to an increase in open probability Popen of the channel. To our knowledge, there are yet no biophysically based models of RyR gating which can explain temperature effects. Traditional Markov chains cannot describe the temperature effects because they are purely phenomeno-logical and have no physical basis.

Here, in the Letter, we explore the predictions of simple electron-conformational model (ECM) proposed earlier to describe RyR gating in cardiomyocites and pacemaker cells [8-10], and argue that the model not only can successfully explain the experimentally found temperature behavior of the RyR2 channels [4, 5] but uncovers some universal features of the physiological thermosensitivity. The origin of high thermosensitivity is related with specific quantum tunneling nature of the transition between "open" and "closed" conformations of the RyR channel and unusually low values of the effective temperature that governs the distribution function for its conformational coordinate.

Electron-conformational model. Recently we have demonstrated that the well-known electron-conformational (EC) model (see, e.g., Ref. [11]) is able to capture important features of the individual and cooperative behaviour of the RyRs in ventricular myocytes [8-10]. The EC model of RyR functioning under Ca2+ stimuli is based on a biophysical adaptation of the well-known theory of photo-induced structural phase transitions, which has been successfully applied to different solids [12].

The ion-activated RyR channel is a giant (30 x x 30 nm) macromolecular protein complex comprising 4 subunits of 565 kDa each [6]. The single-particle electron cryomicroscopy studies [13] suggest that the RyR undergoes large rearrangements of structure in both the transmembrane and cytoplasmic segments as it transitions between the closed and open states under Ca2+ activation. Existence of at least two (open/close) (meta)stable RyR conformational states is a minimal starting point of any model approach. However, as other ion channels it has a great many of internal electron and conformational degrees of freedom and exhibits remarkable complexities that need to be considered when developing realistic models of ion permeation. Nevertheless, until recently most modelling efforts for RyR channels were focused on a simple "hole in the wall" type model with a set of different (open, closed) states. Our knowledge of molecular mechanisms of RyR channel functioning

is limited; hence we are forced to start with the most general "physicists" approach, which implies simplifying biomolecular system to bare essentials with a guidance from experimental data. Modelling the RyR we start with a simple and a little bit naive picture of the massive nanoscopic channel like an elastic rubber tube with a varying cross-section governed by a conformational coordinate Q and a light "electronic" plug switched due to Ca2+-RyR binding/unbinding in the so-called subspace between the RyR and membrane. This electronic plug interacts with the conformational coordinate and acts as a trigger to stimulate its change and related channel cross-section/conductivity. In other words, we reduce a large variety of RyR degrees of freedom to only two: a fast and a slow one, conventionally termed as electronic and conformational one, respectively. Both degrees of freedom are implied to be coupled to realize an EC transformation that is the electronic control of the slow conformational motion. Bearing in mind the main function of RyR channels, we assume only two actual electronic RyR states: "open" and "closed", and a single conformational degree of freedom, Q, described by a classical continuous variable. Change in the electronic and conformational states regulate the main RyR channel function, i.e. determines whether the channel is "open" and permeable for Ca2+ ions or "closed" and impermeable to ions. Hereafter we assume that the conformational variable Q specifies the RyR channel "cross-section" or, more precisely, a permeability for Ca2+, that is a conductance, while the dichotomic electronic variable determines its opening and closure. In a full accordance with a "tube" model the RyR conductance we assumed to obey a simple power dependence

where sz and sx are well-known Pauli matrices, and the first term describes the bare energy splitting of "up" and "down" (electronically "open" and "closed") states with an energy gap A, while the second term describes a quantum mixing effect. The third, linear in Q term formally corresponds to the energy of an external conformational stress, described by an effective stress parameter p. The fourth term in (2) implies a simple harmonic approximation for the conformational energy, K is the effective "elastic" constant. The last term describes the

EC interaction with the coupling parameter a. Hereafter we make use of the dimensionless conformational variable Q; therefore all of the model parameters (A, h,p, K, a) are assigned energy