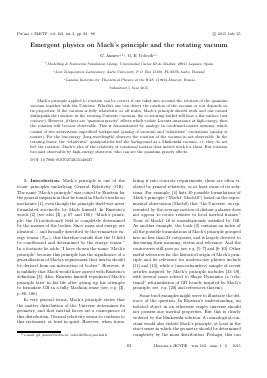 Emergent physics on Mach's principle and the rotating vacuum

Mach's principle applied to rotation can be correct if one takes into account the rotation of the quantum vacuum together with the Universe. Whether one can detect the rotation of the vacuum or not depends on its properties. If the vacuum is fully relativistic at all scales, Mach's principle should work and one cannot distinguish the rotation: in the rotating Universe+vacuum, the co-rotating bucket will have a flat surface (not concave). However, if there are "quantum gravity" effects which violate Lorentz invariance at high energy, then the rotation will become observable. This is demonstrated by analogy in condensed-matter systems, which consist of two subsystems: superfluid background (analog of vacuum) and "relativistic" excitations (analog of matter). For the low-energy (long-wavelength) observer the rotation of the vacuum is not observable. In the rotating frame, the "relativistic" quasiparticles feel the background as a Minkowski vacuum, i.e. they do not feel the rotation. Mach's idea of the relativity of rotational motion does indeed work for them. But rotation becomes observable by high-energy observers, who can see the quantum gravity effects.

1. Introduction. Mach's principle is one of the iconic principles underlying General Relativity (GR). The name "Mach's principle" was coined by Einstein for the general inspiration that he found in Mach's works on mechanics [1], even though the principle itself was never formulated succinctly by Mach himself. In Einstein's words [2] (see also [3], p. 67 and 186): "Mach's principle: the G(ravitational) field is completely determined by the masses of the bodies. Since mass and energy are identical... and formally described by the symmetric energy tensor {T^v), this therefore entails that the G-field be conditioned and determined by the energy tensor." In a footnote he adds: "I have chosen the name 'Mach's principle' because this principle has the significance of a generalization of Mach's requirement that inertia should be derived from an interaction of bodies." However, it is unlikely that Mach would have agreed with Einstein's definition [3]. Also, Einstein himself repudiated Mach's principle later in his life after giving up his attempts to formulate GR in a fully Machian sense (see, e.g. [3], p. 80, 186).

In very general terms, Mach's principle states that the matter distribution of the Universe determines its geometry, and that inertial forces are a consequence of this distribution. General relativity seems to conform to this statement, at least in spirit. However, when trans-

lating it into concrete requirements, these are often violated by general relativity, or at least some of its solutions. For example, [4] lists 10 possible formulations of Mach's principle ("Machl-MachlO") based on the experimental observation (MachO) that "the Universe, as represented by the average motion of distant galaxies does not appear to rotate relative to local inertial frames." None of Machl-10 is unambiguously satisfied by GR. As another example, the book [3] contains an index of all the possible formulations of Mach's principle grouped into no less than 21 categories, and is largely devoted to discussing their meaning, status and relevance. And the controversy still goes on, see, e.g. [5-7] and [8-10]. Other useful references for the historical origin of Mach's principle and its relevance for modern-day physics include [11] and [12], while a (non-exhaustive) sample of recent articles inspired by Mach's principle includes [13-19], with several more related to Shape Dynamics (a "relational" reformulation of GR loosely inspired by Mach's principle, see, e.g. [20] and references therein).

Some brief examples might serve to illustrate the delicacy of the question. In Einstein's understanding, an isolated object in an otherwise empty universe should not possess any inertial properties. But this is clearly violated by the Minkowski solution. A cosmological constant would also violate Mach's principle, at least in the strict sense in which the geometry should be determined completely by the mass distribution. Perhaps, this can

be solved by taking the vacuum energy into account. But the question becomes really delicate when looking at rotating reference frames. These have from the start been at the heart of the debate between absolute and relative motion, as embodied by Newton's bucket argument and Mach's criticism of it, and formed one of the main motivations for Einstein to generalize the special theory of relativity. However, GR is probably not fully satisfactory in this respect. Because of the relativity of motion, one could expect a rotation of a local observer w.r.t. the rest of the Universe to be equivalent to an overall rotation of the Universe about the observer. But this idea leads to several difficulties within standard GR (and in fact formed an important source of inspiration for Brans-Dicke theory [21]). Also, in the absence of an absolute frame of reference, a global state of motion of the Universe - and in particular, a global rotation - should be undetectable (perhaps even meaningless). At first glance, this seems to be violated by the Godel solution of GR, which describes a universe with a uniform non-zero rotation in the whole spacetime [22].

All in all, in spite of Barbour's insistence that GR is "a perfectly Machian theory", or at least "as Machian as one could reasonably hope to make any theory" ([3], p. 214), it is probably safe to say that GR does not deal with the relativity of rotation in a fully satisfactory way. Perhaps Mach's principle needs to be (partially) given up, or on the contrary GR needs to be partially modified or at least reformulated, or certain restrictions should be imposed on physically acceptable GR solutions, such as in Wheeler's initial-value approach, or Sciama's and Brans-Dicke theory. Another possibility is that Mach's principle will become fully clear only at the level of a quantum theory of gravity [3].

In this work, we do not pretend to tackle Mach's principle in all its aspects, but restrict ourselves to the question whether it makes sense to speak of an overall rotational motion of the Universe, and whether a local observer would be able to detect such a hypothetical overall rotational motion. We will argue that if matter and gravitation as we experience them emerge in the low-energy limit from a quantum vacuum, in a sense intimately related to what occurs in certain condensedmatter systems, then Mach's principle with respect to rotation (in the sense of the undetectability of an overall rotation of the universe) is correct. Two key points that we will stress are, first: that one needs to take the vacuum, and in particular the rotation of the vacuum, into account; and second: that the detectability of rotation depends on the observer, whether he is a low-energy (internal) or a high-energy observer.

The structure of this work is as follows. In Sec. 2 the effective metrics emerging in moving superfluids (fluid metric) are discussed, where Mach's principle for rotation is valid for long-wavelength observers (internal observers) . For high-energy observers with access to quantum gravity effects, however, the rotation of the vacuum becomes detectable, as discussed in Sec. 3. In Sec. 4 the two-fluid model of the relativistic quantum vacuum is considered, in which the global rotation is not observable. We draw some general conclusions in Sec. 5.

2. Fluid metric and analogue Mach principle. We start from the simplest example of the fluid metric:

This metric is valid for long-wavelength excitations with linear spectrum E = cp propagating in a background medium (the analog of the quantum vacuum). If the background (vacuum) is moving with velocity v(= = vvac), the spectrum of excitations is Doppler shifted, E = cp + p • v. This leads to the following contravariant metric:

which corresponds to the interval (1).

"Relativistic" excitations can for example be sound waves (phonons) in a moving fluid or superfluid (c then represents the speed of sound, c = cSOUnd, and the corresponding metric is called the acoustic metric) [23-25]; or surface waves (ripplons) on a moving liquid or at the interface between two liquids, which in the shallow-depth limit have linear spectrum [26-30].

The fluid metric for black hole at the end of the gravitational collapse is the Painleve-Gullstrand metric [31], which corresponds to the radial flow field in the form:

where is the radius of lack hole horizon. The de Sitter spacetime is also characterized by the radial velocity field

where is the radius of cosmological horizon. We are interested in the fluid metric with v(r) = f! x r.

Up to this point, the key motivation to think of superfluids is that, for a meaningful discussion of the observability of a rotating state of the background or vacuum, it is necessary to imagine the construction of measurement devices. It is therefore not sufficient to have sound (or surface/interface) waves: one needs stable fermionic (quasi)particles [32]. "Relativistic" fermionic

quasiparticles appear in the topological Weyl superfluids [33], in graphene [34], and in Weyl and Dirac semimet-als [35], where in the vicinity of the Weyl or Dirac point the spectrum becomes linear, and these quasiparticles even mi