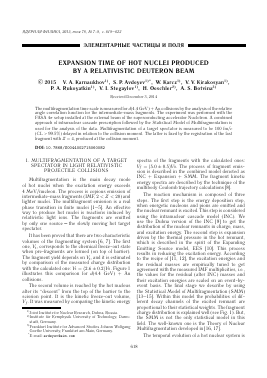 The multifragmentation time scale is measured for d(4.4 GeV) + Au collisions by the analysis of the relative angle correlation function for the intermediate-mass fragments. The experiment was performed with the FASA 4n setup installed at the external beam of the superconducting accelerator Nuclotron. A combined approach of intranuclear cascade prescription followed by the Statistical Model of Multifragmentation is used for the analysis of the data. Multifragmentation of a target spectator is measured to be 100 fm/c (CL > 99.5%) delayed in relation to the collision moment. The latter is fixed by the registration of the fast fragment with Z = 4, produced at the collision moment.

1. MULTIFRAGMENTATION OF A TARGET SPECTATOR IN LIGHT RELATIVISTIC PROJECTILE COLLISIONS

Multifragmentation is the main decay mode of hot nuclei when the excitation energy exceeds 4 MeV/nucleon. The process is copious emission of intermediate-mass fragments (IMF, 2 < Z < 20) and lighter nuclei. The multifragment emission is a real phase transition in finite nuclei [1—5]. An effective way to produce hot nuclei is reactions induced by relativistic light ions. The fragments are emitted by only one source — the slowly moving hot target spectator.

It has been proved that there are two characteristic volumes of the fragmenting system [6, 7]. The first one, Vt, corresponds to the chemical freeze-out state when pre-fragments are formed (on top of barrier). The fragment yield depends on Vt, and it is estimated by comparison of the measured charge distribution with the calculated one: Vt = (2.6 ± 0.2) V0. Figure 1 illustrates this comparison for d(4.4 GeV) + Au collisions.

The second volume is reached by the hot nucleus after its "descent" from the top of the barrier to the scission point. It is the kinetic freeze-out volume, Vf. It was measured by comparing the kinetic energy

spectra of the fragments with the calculated ones: Vf = (5.0 ± O.5)V0. The process of fragment emission is described in the combined model denoted as INC + Expansion + SMM. The fragment kinetic energy spectra are described by the technique of the multibody Coulomb trajectory calculations [8].

The reaction mechanism is composed of three steps. The first step is the energy deposition step, when energetic nucleons and pions are emitted and the nuclear remnant is excited. This step is considered using the intranuclear cascade model (INC). We use the Dubna version of the INC [9] to get the distribution of the nuclear remnants in charge, mass, and excitation energy. The second step is expansion driven by the thermal pressure in the hot remnant, which is described in the spirit of the Expanding Emitting Source model, EES [10]. This process results in reducing the excitation energy. According to the recipe of [11, 12], the excitation energies and the residual masses are empirically tuned to get agreement with the measured IMF multiplicities, i.e., the values for the residual (after INC) masses and their excitation energies are scaled on an event-by-event basis. The final stage we describe by using the Statistical Model of Multifragmentation (SMM) [13—15]. Within this model the probabilities of different decay channels of the excited remnant are proportional to their statistical weights. The fragment charge distribution is explained well (see Fig. 1). But, the SMM is not the only statistical model in this field. The well-known one is the Theory of Nuclear Multifragmentation developed in [16, 17].

The temporal evolution of a hot nuclear system is

Fig. 1. Charge distribution of intermediate-mass fragments produced in collisions d (4.4 GeV) + Au. Error bars do not exceed the symbol size. The line is model-calculated and normalized to the data at Z = 3. The thickness of the line reflects the accuracy of the calculations.

the main subject of this paper. It is shown in [18] that the time scale of the process includes the thermaliza-tion time of the excited target spectator t\, the mean time of the expansion to reach the transition state t2, and the mean time interval between the barrier and the multi-scission point (t3—t2) (see Fig. 2).

The value of rem for collision of a 4.4-GeV deuteron with gold was found to be less than or equal to 40 fm/c [19]. The total time scale was the first to measure for the thermal multifragmentation by the FASA Collaboration: it takes 100 ± 15 fm/c to reach the kinetic freeze-out point [20]. This result is obtained by the analysis of the relative angle correlation between IMFs and a high-energy Li fragment, which is assumed to be produced at the collision moment via the coalescence mechanism. In this paper, the total characteristic time of mulifragmentation is estimated by means of the relative angle correlation between a high-energy Be fragment and intermediate-mass fragments. This result is very important to exclude the possible systematic uncertainty related to admixture of He ions in detection of the fast Li.

Fig. 2. Top: potential energy of a hot nucleus as a function of the system radius. Bottom: schematic view of the multifragmentation process and its time scale. Emission of the pre-equilibrium particle is shown by the arrow at the moment h.

The experiment was performed with the FASA 4^ setup [21, 22] installed at the external beam of the Dubna superconducting accelerator Nuclotron. The setup includes an array of 30 dE—E telescopes, which allow measuring the fragment charge, energy distributions, and their relative angle correlations.

Each telescope consists of a compact ionization chamber used as a dE detector and a Si(Au) detector used as an E spectrometer. The ionization chamber has a shape of a cylinder (50 mm in diameter and 40 mm high). It is made of well-polished brass. The entrance and exit windows are made from organic films (~100 ¡g/cm2) covered by a thin gold layer. The working gas is CF4 at a pressure of 50—100 Torr. Gold wire of 0.5 mm in diameter is an anode. Sensitive thickness of the E detector is around 700 ¡, it is enough for measuring the energy spectra of the intermediate-mass fragments.

The self-supporting gold target (1.5 mg/cm2) is located in the centre of the evacuated FASA chamber (~100 cm in diameter). The target is inclined at an angle of 45° with respect to the beam axis. The average beam intensity was 108 particles per second. The projectile current is measured by a special ionization chamber mounted at 120 cm behind the target. The beam profile was controlled by two multiwire proportional chambers located immediately

Fig. 3. Two dimensional dE—E plot measured by one of the telescopes. The fragment energy is given at the front of the telescope. The intermediate mass fragments are well resolved in the range from lithium (Z = 3) to sulfur (Z = 16).

behind the FASA setup. The total beam flux during the run is measured via activation of an Al foil 50 f thick.

Figure 3 gives an example of dE—E plot measured by one of the telescopes for d + Au collisions at 4.4 GeV. The fragment energy is given at the front of the telescope. It is obtained from the measured value by adding the energy lost on the way from the target to the E detector. The loci for different intermediate mass fragments are well resolved in the range from lithium (Z = 3) to sulfur (Z = 16). The energy cutoff caused by absorption of the low-energy fragments before the Si (Au) detector increases with Z of fragments. Thus, Ne fragments with the energy less than 25 MeV do not reach the E counter.

The kinetic energy spectrum of a Be fragment is given in Fig. 4. The histogram is model calculated and it follows the data in the vicinity of the spectrum maximum. High-energy tail is remarkably below the data. Partly, it may be attributed to the radial flow generated by the thermal pressure in the fragment source [23] or to the pre-equilibrium emission of these fragments.

The measured relative angle correlation function triggered by the Be fragments is given in Fig. 5 together with the calculated one. It was obtained by the procedure like that in [18]. All the observed fragments were used to compose this figure. The emitted fragments interact via the Coulomb force

Fig. 4. Kinetic energy spectrum of Be from d (4.4 GeV) + + Au collisions. The model-predicted spectrum is given by a histogram.

Fig. 5. Distributions of relative angles between coincident fragments: symbols are the data, the line is the model-calculated prompt disintegration; the first fragment is Be and the second one is heavier than helium but lighter than the fission fragments; dashed area gives an uncertainty of calculation.

while being accelerated in the electric field of the source. As a result, the yield of the events with a small relative angle between them is suppressed. The magnitude of this effect drasticall