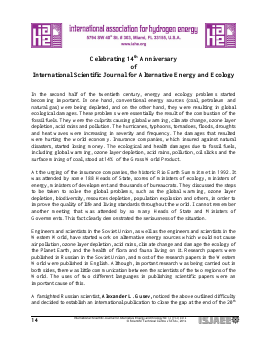 In the second half of the twentieth century, energy and ecology problems started becoming important. In one hand, conventional energy sources (coal, petroleum and natural gas) were being depleted, and on the other hand, they were resulting in global ecological damages. These problems were essentially the result of the combustion of the fossil fuels. They were the culprits causing global warming, climate change, ozone layer depletion, acid rains and pollution. The hurricanes, typhoons, tornadoes, floods, droughts and heat waves were increasing in severity and frequency. The damages that resulted were hurting the world economy. Insurance companies, which insured against natural disasters, started losing money. The ecological and health damages due to fossil fuels, including global warming, ozone layer depletion, acid rains, pollution, oil slicks and the surface mining of coal, stood at 14% of the Gross World Product.

At the urging of the insurance companies, the historic Rio Earth Summit met in 1992. It was attended by some 188 Heads of State, scores of ministers of ecology, ministers of energy, ministers of development and thousands of bureaucrats. They discussed the steps to be taken to solve the global problems, such as the global warming, ozone layer depletion, biodiversity, resources depletion, population explosion and others, in order to improve the quality of life and living standards throughout the world. I cannot remember another meeting that was attended by so many Heads of State and Ministers of Governments. This fact clearly demonstrated the seriousness of the situation.

Engineers and scientists in the Soviet Union, as well as the engineers and scientists in the Western World, have started work on alternative energy sources which would not cause air pollution, ozone layer depletion, acid rains, climate change and damage the ecology of the Planet Earth, and the health of flora and fauna living on it. Research papers were published in Russian in the Soviet Union, and most of the research papers in the Western World were published in English. Although, important research was being carried out in both sides, there was little communication between the scientists of the two regions of the World. The uses of two different languages in publishing scientific papers were an important cause of this.

A farsighted Russian scientist, Alexander L. Gusev, noticed the above outlined difficulty and decided to establish an international publication to close the gap at the end of the 20th

In its 14th Anniversary, I congratulate the farsighted scientist, Alexander L. Gusev, and his colleagues for establishing this important journal, International Scientific Journal for Alternative Energy and Ecology, and wish the journal a very productive life forever.