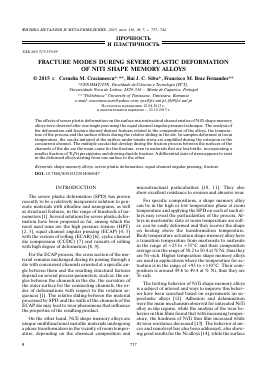 The effects of severe plastic deformation on the surface microstructural characteristics of NiTi shape memory alloys were observed after one single pass using the equal channel angular pressure technique. The analysis of the deformation and fracture showed distinct features related to the composition of the alloys, the temperature of the process and the surface effects during the relative sliding in the die. In samples deformed at room temperature, the cracks initiated at the surface under tensile stress are amplified during the extrusion in the concurrent channel. The multiple cracks that develop during the friction process between the surfaces of the channels of the die are the main cause for the fracture, even in materials that are less brittle, incorporating a smaller fraction of Ti2Ni precipitates and showing ductile fracture. A differential state of stress appears to exist in the deformed alloys starting from one surface to the other.

The severe plastic deformation (SPD) has proven recently to be a relatively inexpensive solution to generate materials with ultrafine and nanograins, as well as structural features, in the range of hundreds of nanometers [1]. Several solutions for severe plastic deformation have been proposed so far, among which the most used ones are the high pressure torsion (HPT) [2, 3], equal channel angular pressing (ECAP) [4, 5] with the version of rolling (ECAR) [6], cyclic channel die compression (CCDC) [7] and variants of rolling with high degree of deformation [8, 9].

For the ECAP process, the cross section of the material remains unchanged during its passing through a die with concurrent channels oriented at a specific angle between them and the resulting structural features depend on several process parameters, such as: the angles between the channels in the die, the curvature of the outer surface for the connecting channels, the order of deformations with respect to the rotation sequences [1]. The relative sliding between the material processed by SPD and the walls of the channels of the ECAP die may lead to wear phenomena that influence the properties of the resulting product.

On the other hand, NiTi shape memory alloys are unique multifunctional metallic materials undergoing a phase transformation in the vicinity of room temperature, depending on the chemical composition and

The fretting behavior of NiTi shape memory alloys is a subject of interest and ways to improve this behavior have been searched based on experiments on su-perelastic alloys [12]. Adhesion and delamination were the main mechanism observed for untreated NiTi alloy in slip regime, while the analysis of the wear behavior in thin films found that with increasing temperature, the hardness of NiTi thin film increased while its wear resistance decreased [13]. The behavior at micro and nanolevel has also been addressed, also showing good results for the Ni alloys [14], while the surface

Fig. 1. Details about the experimental SPD by ECAP settings.

treatment by ceramic conversion revealed the spallation of the surface-treated layers [15].

The temperatures for applying the severe plastic deformation can vary in a wide range, depending on the compositional and structural features. For example, it has been reported that the tendency for amor-phized and nanocrystalline structures depends on the relative positions of the martensitic transformation temperature Ms and the deformation temperature [16], but, depending on the temperature, different mechanisms (from martensite reorientation to generation of stress induced martensite) can be envisaged. Concerning the properties, higher strength and reasonable elongation [1] as well as perfect pseudoelastic-ity, small pseudoelastic stress hysteresis and excellent cyclic response up to 1000 cycles [17] have been reported. In metal matrix composites, strengthening mechanisms — known to be associated with ultrafine grains- can be improved via severe plastic deformation. The exploration of SPD role in improving shape memory alloy properties is a subject of recent interest [18—24] and the present work aims to interpret the fracture behavior of NiTi shape memory alloys, processed by ECAP and to identify the relevant features related to compositional particularities that can influence the resulting fabrication of actuating applications presenting a submicron and naonocrystalline range structure.

An ECAP deformation system has been designed and manufactured for processing in a mechanical press (Fig. 1a), using a die (Fig. 1b) with 120° angle between the concurrent channels and a radius of 2 mm between the channels (Fig. 1c).

NiTi samples with 4 x 10 x 18 mm were made out of NiTi actuating alloys (i.e. in martensitic state at room temperature). Two alloys supplied by Memry GmbH, with different compositions have been used for the experiments. Alloy B (a standard alloy for body temperature applications) is Ni-rich (50.2 to 50.4 at % Ni), with the supplier's transformation temperature specified on heating (Af) in the range of+25 to +35°C. Alloy H (for high temperature applications) is slightly Ti rich (49.6 to 49.4 at % Ni), with the Af temperature in the range of +95 to +110°C. Prior to the ECAP, both alloys have been plastically deformed at RT with successive annealing in order to attain a 4 mm thickness. A final annealing at 500°C for 15 min was performed and the samples have been polished with 1200 grinding paper before being processed by ECAP. The deformation via ECAP has been performed at RT and at 400°C, respectively for alloy B and H.

X-ray diffraction was used in order to characterize the structure at RT, using a Bruker diffractometer (rotating anode-XM18H, CuZa radiation, power of 30kV/100mA, D5000 goniometer) with conventional 9/29 scans at RT temperature. The scanning electron microscopy (SEM) observations were performed in a Zeiss model DSM 962 and the chemical composition was determined with an energy dispersive spectrometer (EDS) from Oxford Instruments model INCAx-sight. Semi-quantification microanalysis was made using ZAF correction procedure.

The experimental results were analyzed based on the particularities of the deformation process (RT and 400°C temperature), the composition and the micro-

flakes tesile stress during the deformation

Fig. 2. Macroscopic images of the NiTi H alloy SPD samples deformed at RT (the midrib is related to the die particularities).

structural particularities of the NiTi shape memory alloys investigated in this study. The high-velocity process considered favors the sample fracture during the process, thus preserving the information concerning the severe plastic deformation during the actual process. The use of lubricant is known to improve the SPD results, but for the experiments aiming to explore the direct fracture and friction effects that develop during the severe plastic deformation they have not been used in the experiments. The use of high velocity deformation also leads to a severe and direct effect on the surface of the sample that is in immediate contact with the edge where the two channels of the die intersect. This results in part of the material to revert over the surface of the sample. Although these particularities may also be present in cases where the deformation is made at lower rates and with the use of lubricants, they are less evident and more difficult to characterize compare to the ones observed in the high-speed experiments.