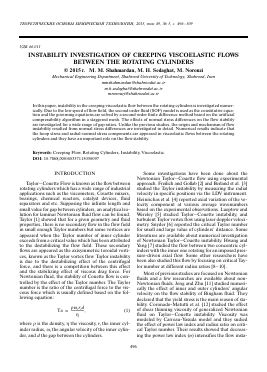 In this paper, instability in the creeping viscoelastic flow between the rotating cylinders is investigated numerically. Due to the low speed of flow field, the second order fluid (SOF) model is used as the constitutive equation and the governing equations are solved by a second order finite difference method based on the artificial compressibility algorithm in a staggered mesh. The effects of normal stress differences on the flow stability are investigated for a wide range of gap ratios. Unlike the previous studies, the origin and mechanism of flow instability resulted from normal stress differences are investigated in detail. Numerical results indicate that the hoop stress and radial-normal stress components are appeared in viscoelastic flows between the rotating cylinders and they have an important role on the flow stability.

Taylor—Couette Flow is known as the flow between rotating cylinders which has a wide range of industrial applications such as the viscometers, Couette mixers, bearings, chemical reactors, catalyst devices, fluid separators and etc. Supposing the infinite length and small value for gap between cylinders, an analytical solution for laminar Newtonian fluid flow can be found. Taylor [1] showed that for a given geometry and fluid properties, there is no secondary flow in the flow field in small enough Taylor numbers but some vortices are appeared when the Taylor number of inner cylinder exceeds from a critical value which has been attributed to the destabilizing the flow field. These secondary flows are appeared as the axisymmetric toroidal vortices, known as the Taylor vortex flow. Taylor instability is due to the destabilizing effect of the centrifugal force, and there is a competition between this effect and the stabilizing effect of viscous drag force. For Newtonian fluid, the stability of Couette flow is controlled by the effect of the Taylor number. The Taylor number is the ratio of the centrifugal force to the viscous force which is usually defined based on the following equation:

Some investigations have been done about the Newtonian Taylor—Couette flow using experimental approach. Freilich and Gollab [2] and Berland et al. [3] studied the Taylor instability by measuring the radial velocity in specific positions via the LDV instrument. Heinrichas et al. [4] reported axial variation of the velocity component at various average wavenumbers based on the experimental observations. Lueptow and Wereley [5] studied Taylor—Couette instability, and turbulent Taylor vortex flow using laser doppler veloci-metry. Snyder [6] reported the critical Taylor number for small and large value of cylinders' distance. Some literatures are available about numerical investigation of Newtonian Taylor—Couette instability. Hwang and Yang [7] studied the flow between two concentric cylinders with the inner one rotating for an imposed pressure-driven axial flow. Some other researchers have been also studied this flow by focusing on critical Taylor number at different radius ratios [8—10].

Most of previous studies are focused on Newtonian fluids and a few researches are available about non-Newtonian fluids. Jeng and Zhu [11] studied numerically the effect of inner and outer cylinders' angular velocity on the flow stability of Bingham fluid. They declared that the yield stress is the main reason of stability. Coronado-Matutti et al. [12] studied the effect of shear thinning viscosity of generalized Newtonian fluid on Taylor—Couette instability. Viscosity was modeled by Carreau-Yasuda model and they sudied the effect of power law index and radius ratio on critical Taylor number. Their results showed that decreasing the power law index (n) intensifies the flow insta-

bility which is due to reducing of fluid viscosity. They also showed that decreasing the radius ratio intensifies the flow instability. Some related researches have been done about Taylor—Couette instability and instability in curved pipes for non-Newtonian fluids [13—18].

Simulation of viscoelastic fluid flows is significantly more challenging than Newtonian flows due to the hyperbolic nature of viscoelastic constitutive equations [19—21]. A few researches are available about non-inertial viscoelastic Taylor—Couette flow. Giesekus [22] studied Taylor—Couette instability at low Taylor number (Ta = 0.01) and nonzero Deborah number. He showed that instability is happened if the second normal stress coefficient (¥2) is positive and large in magnitude in relative to the first normal stress coefficient (^1)1 Nevertheless experimental works show that in most polymeric solutions, is negative and too smaller than Muller et al. [23] studied non-inertial, cellular instability in the Taylor—Couette flow of a viscoelastic fluid. Their experiments are based on a Boger fluid and it is also modeled by Old-royd-B equation. They reported critical 24] studied empirically the variation of s (the ratio of the gap to the inner cylinder radius) on critical Deborah number at low Taylor numbers. They also compare their results by linear stability analysis of the inertial-less flow of an Oldroyd-B fluid. They showed that for s = 0.14 and Ta = 10-6, secondary vortices generated when the Deborah number reaches 20. Their results also indicated that the critical Deborah number increases by decreasing radius ratio (s). Shaqfeh et al. [25] studied Taylor—Couette instability for creeping flow for relatively small gap ratios (0 < < s < 0.35). They also used modified Oldroyd-B model to include second

normal stress differences. They showed that the strength and both the axial and radial dimensions of vortices are decreased by increasing the gap ratio. Their results also indicated that Positive second normal stress differences are destabilizing the flow, while negative differences are strongly stabilizing it. Larson [26] demonstrated this kind of instability for purely elastic and inertial flow. Some related articles also have been done on Taylor—Couette instability for creeping flows [27-32].

Most of previous studies used Oldroyd-B constitutive equation to model Taylor-Couette instability in creeping flows between the rotating cylinders. This constitutive equation has some limitations. First, the model has only a single relaxation time, in addition this model shows a zero second normal stress difference (N2) [26] while the experimental observations indicated that the second normal stress difference has an important role in flow stability.

In this paper, the effect of normal stress differences on the viscoelastic Taylor-Couette instability in creeping flow is studied numerically. Second order fluid model is used as the constitutive equation to study the effect of both first and second normal stress differences and gap ratio on Taylor-Couette instability in creeping flows. This constitutive equation is suitable to study the low speed and creeping flow of viscoelastic fluids. To omit the end effects, two stationary caps are considered in the both side of rotating cylinders. This idea has been introduced by Coronado-Mattuti et al. [12]. The schematic shape of the rotating cylinders and stationary caps is shown in Fig. 1. Similar to the work of Coronado-Mattuti et al. [12], the length ofthe

stationary caps is considered as a one quarter of rotating cylinders (L). According to Fig. 1, the radius and angular velocity of the inner and outer cylinders are considered as the rin, ®in, rout and ®out, respectively. In this study, the FTCS (forward finite difference in time and second-order central finite difference in space) finite difference method on a staggered mesh is used to discretize the governing equations based on the artificial compressibility method. The viscoelastic flow between rotating cylinders has been modeled for a wide range of gap ratios, and rheological properties. The main objective of the current study is investigating the origin of viscoelastic Taylor—Couette instability resulted from normal stress differences in creeping flows.

where V is the velocity vector, p the density, P the

static pressure, t the time and t the stress tensor. The governing non-dimensional parameters can be expressed as

where r and z are the components of cylindrical coordinate system, d the gap between the cylinders, W0 the reference velocity, n0 the viscosity in zero shear rate, vh the components of velocity, p the gap ratio, Г the aspect ratio, and Re the Reynolds number. Due to the axisymmetric condition, the flow field between the cylinders is independent from angular direction (0). This assumption is valid as long as the Taylor numbers (for both stable and inst