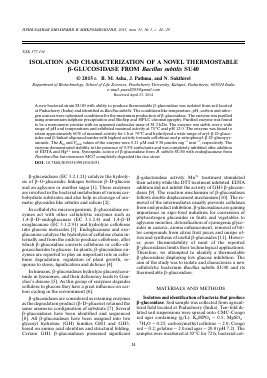 A new bacterial strain SU40 with ability to produce thermostable P-glucosidase was isolated from soil located at Puducherry (India) and identified as Bacillus subtilis. The conditions like temperature, pH, carbon and nitrogen sources were optimized conditions for the maximum production of P-glucosidase. The enzyme was purified using ammonium sulphate precipitation and BioSep and HPLC chromatography. Purified enzyme was found to be a monomeric protein with an apparent molecular mass of 38.3 kDa. The enzyme was stable over a wide range of pH and temperatures and exhibited maximal activity at 75°C and pH 12.0. The enzyme was found to retain approximately 60% of maximal activity for 1 h at 70°C and hydrolyzed a wide range of aryl-P-D-gluco-sides and P-linked oligosaccharides with highest activity towards cellobiose and p-nitrophenyl-P-D-glucopyr-anoside. The Km and Vmax values of the enzyme were 0.21 цМ and 9.38 ^moles mg-1 min-1, respectively. The enzyme demonstrated stability in the presence of 0.5% surfactants and was completely inhibited after addition of EDTA and Hg2+ ions. Synergistic action of P-glucosidase from B. subtilis SU40 with endoglucanase from Paenibacillus barcinonensis MG7 completely degraded the rice straw.

P-glucosidases (EC 3.2.1.21) catalyze the hydrolysis of P-O-glucosidic linkages between P-D-glucose and an aglycone or another sugar [1]. These enzymes are involved in the bacterial metabolism ofvarious carbohydrate substrates and also help in cleavage of aromatic glycosides like arbutin and salicin [2].

In humans, P-glucosidases hydrolyze glucosylcera-mide in lysosomes, and their deficiency leads to Gau-cher's disease [5]. As this group of enzymes degrades cellulose to glucose they have a great influence on carbon cycling in the environment [6].

P-galactosidase activity. Mn2+ treatment stimulated their activity while the DTT treatment inhibited. EDTA addition did not inhibit the activity of GH3 P-glucosi-dases [9]. The reaction mechanism of P-glucosidases follows double displacement mechanism [10]. The removal of the intermediates usually prevents cellulases from end product inhibition. P-glucosidases are gaining importance in argo-food industries for conversion of phytoestrogen glucosides in fruits and vegetables to aglycone moieties, detoxification of cyanogenic glycosides in cassava, aroma enhancement, removal of bitter compounds from citrus fruit juices and unripe olives and synthesis of useful P-glucosides [11]. However, poor thermostability of most of the reported P-glucosidases limits their technological applications. Therefore, we attempted to identify a thermostable P-glucosidase displaying low glucose inhibition. The aim of the study was to isolate and characterize a new cellulolytic bacterium Bacillus subtilis SU40 and its thermostable P-glucosidase.

Table 1. Purification of P-glucosidase from B. subtilis SU40

ony that induced clear zone due to cellulolytic enzyme production was identified and pure culture was established as described [12]. Identification of bacteria was done based on 16S rRNA sequence homology [13].

Production of p-glucosidase enzyme. The suspension of about 2 x 109 CFU/mL of overnight grown B. subtilis SU40 cells was inoculated in a fermentation media containing wheat bran (WB) and coconut oil cake (COC) (1 : 1 w/w), 1% peptone, with 60% moisture and cellobiose as inducer and incubated at 35°C for 72 h. Crude P-glucosidase produced was extracted by mixing 20 g of fermented matter with 100 mL of 0.1 M Tris HCl (pH 8.0) on a rotary shaker (150 rpm) for 1 h. The suspension was then centrifuged at 8000 g at 4°C for 10 min and the supernatant was used for enzyme assay. Dry weight of fermented substance was determined by drying a known amount of WB and COC in an oven at 80°C for 12 h P-glucosidase assay. Enzyme activity was determined by measuring p-nitrophenol released from p-nitrophenyl P-D-glucopyranoside (pNPG) [14]. The assay mixture containing 10 mM pNPG in 0.1 M Tris HCl buffer (pH 8.0) was incubated with the P-glucosidase from B. subtilis SU40 for 30 min at 75°C in a total volume of1 mL. The reaction was stopped by adding 1 mL of1 M Na2CO3. One unit of P-glucosidase activity was defined as the amount of enzyme required to release 1 ^mol of p-nitrophenol per min under the described conditions.

Protein estimation. Protein concentration was measured by Lowry's method with BSA as a standard.

Enzyme purification. The crude enzyme obtained from fermentation with B. subtilis SU40 cells was precipitated using ammonium sulphate to 90% saturation. The precipitate was collected in each step by centrifug-ing at 15.000 g for 20 min. The pellet and supernatant were assayed for P-glucosidase activity. The fractions were dissolved in minimum volume of 10 mM Tris-HCl buffer (pH 8.0) and dialyzed for 24 h against the same buffer. The extract obtained after dialysis was concentrated using freeze dryer (VirTis Wizard 2.0, Advantage Plus, USA). The enzyme activities and protein concentrations were measured and specific activities were calculated. The active dialyzed fractions were load on BioSep (Phenomenex, USA) gel exclusion chromatographic column (50 x 22 mm i.d., 10 ^m particle size), previously equilibrated with 10 mM Tris-HCl buffer (pH 8.0) and eluted with the same buffer at a flow rate of 0.5 mL/min. The active fractions were pooled together, lyophilized and purified by prepara-

Determination of molecular mass. Molecular mass of P-glucosidase from B. subtilis SU40 was determined on 10% SDS-PAGE as described [15].

Effect of pH and temperature on the activity and stability of purified enzyme. The effect of pH on the

Effect of metal ions on the stability of enzyme. The

Substrate specificity. To determine the substrate specificity of P-glucosidase from B. subtilis SU40, the enzyme assay was performed in reaction mixture containing 10 mM each of cellobiose, cellotetrose, cellotriose, maltose, sucrose, pNPG, p-nitrophenyl P-D-galacto-pyranoside (pNPGa) and p-nitrophenyl P-D-focopy-ranoside (pNPF) in 10 mM carbonate buffer at pH 12.0 and 75°C for 30 min.

Hydrolysis of rice straw. Rice straw (0.125 g) previously subjected to steam explosion (at 15 psi) was hy-drolyzed in 5 mL reaction volume containing 10 mM carbonate buffer (pH 12.0) and 0.5 U of P-glucosidase from B. subtilis SU40 (based on activity towards pNPG) with or without 0.5 U of endoglucanase from Paeniba-cillus barcinonensis MG7 [12]. The hydrolysis was carried out for 96 h with 500 ^L of reaction mixture taken at 12 h intervals for analysis of the presence of reducing sugars by the dinitrosalicilic acid (DNS) method [16].