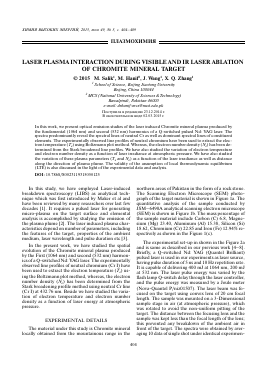 In this work, we present optical emission studies of the laser induced Chromite mineral plasma produced by the fundamental (1064 nm) and second (532 nm) harmonics of a Q-switched pulsed Nd: YAG laser. The spectra predominantly reveal the spectral lines of neutral Cr as well as dominant spectral lines of constituent elements. The experimentally observed line profiles of neutral chromium have been used to extract the electron temperature (Te) using Boltzmann plot method. Whereas, the electron number density (Ne) has been determined from the Stark broadened line profiles. We have also studied the variation of electron temperature and electron number density as a function of laser irradiance at atmospheric pressure. We have also studied the variation of these plasma parameters (Te and Ne) as a function of the laser irradiance as well as distance along the direction of plasma plume. The validity of the assumption of local thermodynamic equilibrium (LTE) is also discussed in the light of the experimental data and analysis.

In this study, we have employed Laser-induced breakdown spectroscopy (LIBS) as analytical technique which was first introduced by Maker et al and have been reviewed by many researchers over last few decades [1]. It requires a pulsed laser for generating micro-plasma on the target surface and elemental analysis is accomplished by studying the emission of the plasma plume [2]. The laser induced plasma characteristics depend on number ofparameters, including the features of the target, properties of the ambient medium, laser wavelength and pulse duration etc [3].

In the present work, we have studied the spatial evolution of the Chromite mineral plasma produced by the First (1064 nm) and second (532 nm) harmonics of a Q-switched Nd: YAG laser. The experimentally observed line profiles of neutral chromium (Cr I) have been used to extract the electron temperature (Te) using the Boltzmann plot method, whereas, the electron number density (Ne) has been determined from the Stark broadening profile method using neutral Cr line (Cr I) at 432.76 nm. Beside we have studied the variation of electron temperature and electron number density as a function of laser energy at atmospheric pressure.

northern areas of Pakistan in the form of a rock stone. The Scanning Electron Microscope (SEM) photograph of the target material is shown in Figure 1a. The quantitative analysis of the sample conducted by JSM—6490A analytical scanning electron microscope (SEM) is shown in Figure 1b. The mass percentage of the sample material include Carbon (C) 6.8, Magnesium (Mg) 23.40, Aluminum (Al) 15.38, Silicon (Si) 18.62, Chromium (Cr) 22.85 and Iron (Fe) 12.94% respectively as shown in the Figure 1(c).

The experimental set-up in shown in the Figure 2a and is same as described in our previous work [4—8]. Briefly, a Q-switched Nd: YAG (Quantel Brilliant) pulsed laser is used in our experiments as laser source, having pulse duration of5 ns and 10 Hz repetition rate. It is capable of delivering 400 mJ at 1064 nm, 200 mJ at 532 nm. The laser pulse energy was varied by the flash lamp Q-switch delay through the laser controller, and the pulse energy was measured by a Joule meter (Nova-Quantel P/niz01507). The laser beam was focused on the target using convex lens of 20 cm focal length. The sample was mounted on a 3-Dimensional sample stage in air (at atmospheric pressure), which was rotated to avoid the non-uniform pitting of the target. The distance between the focusing lens and the sample was kept less than the focal length of the lens; this prevented any breakdown of the ambient air in front of the target. The spectra were obtained by averaging 10 data of single shot under identical experimen-

LASER PLASMA INTERACTION DURING VISIBLE AND IR LASER ABLATION (a) (a)

Fig. 1. Chemistry of the sample.

(a) SEM Photograph of the sample showing its morphology, (b) the SEM signals of the sample material, (c) relative compositions of elements present in the sample.

tal conditions. The radiation emitted by the plasma were collected by a fiber optics (high-OH, core diameter: 600 ^m) having a collimating lens (0°-45° field of view) placed at right angle to the direction of the laser beam. This optical fiber was connected with the

Fig. 2. Experimental detail and energy level diagram. (a) Block diagram of the experimental setup, (b) the emission spectrum generated by the laser having energy 120 mJ at a distance 0.05 mm from the target surface, (c) energy levels diagram showing Cr spectral transitions.

In the first set of the experiments, we have recorded the plasma emission produced by the first (1064 nm) as well as second (532 nm) harmonics of the laser. The laser was focused on the target material by a quartz lens having focal length of 20 cm. Chromite mineral plasma was recorded at different positions along the direction of propagation of the plasma. Figure 2b shows a window of spectral region from 390 to 445 nm of the spectrum recorded using first harmonic of the laser having pulse energy 120 mJ while the detector was placed at 0.05 mm from the target surface along the direction of plasma expansion. The spectral transitions are depicted in the Figure 2c.

where, Iki is the integrated line intensity of the transition involving an upper level (k) and a lower level (i), Xki is the transition wavelength, Aki is the transition probability, gk is the statistical weight of level (k), N(T) is the total number density, U(T) is the partition function, Ek is the energy of the upper level, k is the Boltz-mann constant and T is the excitation temperature. A plot of ln (XI/gA) versus the term energy EK gives a straight line with a slope equal to (-1/KT). Thus the electron temperature can be determined without the knowledge of the total number density or the partition function. The line identifications and different spectroscopic parameters such as wavelength (Xki), statistical weight (gk), transition probability (Aki) and term energy (Ek) are listed in Table 1 using NIST data base [9]. A typical Boltzmann plot is shown in Figure 3a, in which we have used nine neutral Cr lines (Table 1) for the calculation of Te. Erro