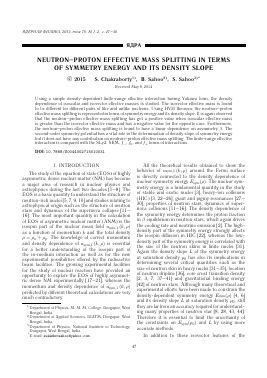 The study of the equation of state (EOS) of highly asymmetric dense nuclear matter (NM) has become a major area of research in nuclear physics and astrophysics during the last two decades [1—8]. The EOS is a basic quantity to understand the structure of neutron-rich nuclei [5, 7,9, 10] and studies relating to astrophysical origin such as the structure of neutron stars and dynamics of the supernova collapse [11 — 16]. The most important quantity in the calculation of EOS of asymmetric nuclear matter (ANM) is the isospin part of the nuclear mean field «sym)1 (k,p) as a function of momentum k and the total density P = Pn + Pp. The knowledge of correct momentum and density dependence of usym>1 (k,p) is essential for a better understanding of the isospin part of the in-medium interaction as well as for the new experimental possibilities offered by the radioactive beam facilities. The growing experimental facilities for the study of nuclear reaction have provided an opportunity to explore the EOS of highly asymmetric dense NM experimentally [17—21], whereas the momentum and density dependence of usym>1 (k,p) predicted by different theoretical calculations are very much contradictory.

All the theoretical results obtained to show the behavior of usym>1 (k,p) around the Fermi surface is directly connected to the density dependence of nuclear symmetry energy ,Esym(p). The nuclear symmetry energy is a fundamental quantity in the study of stable and exotic nuclei [3], heavy-ion collisions (HIC) [3, 22—26], giant and pigmy resonances [27— 30], properties of neutron stars, dynamics of supernova collisions [11 — 16]. The density dependence of the symmetry energy determines the proton fraction in [ equilibrium in neutron stars, which again drives the cooling rate and neutrino emission [2]. The high-density part of the symmetry energy strongly affects the isospin diffusion in HIC [22], whereas the low-density part of the symmetry energy is correlated with the size of the neutron skins in finite nuclei [31]. Again the density slope L of the symmetry energy at saturation density p0 has also its implications in determining several critical quantities such as the size of neutron skin in heavy nuclei [31—35], location of neutron dripline [36], core crust transition density [2, 3, 7, 37—41] and gravitational binding energy [42] of neutron stars. Although many theoretical and experimental efforts have been made to constrain the density-dependent symmetry energy ,Esym(p) [4, 6] and its density slope L at saturation density p0, still they are far from an accuracy required for understanding many properties of neutron star [8, 28, 43, 44]. Therefore it is essential to limit the uncertainty of the constraints on ,Esym (p0) and L by using more accurate methods.

In addition to these isovector features of the

nuclear EOS, the nucleon effective mass happens to be another important property to describe finite nuclei as well as infinite nuclear systems [45]. A proper knowledge about the neutron and proton effective mass splitting mn-p/m is essential for understanding many interesting questions in nuclear physics as well as astrophysics [3, 46—48] such as pairing and super fluidity in nuclei, properties of rare isotopes, isospin transport in heavy-ion reactions, thermal and transport properties of neutron star crust and cooling mechanism of proto-neutron star. The nucleon isoscalar effective mass is well known to be 0.7 ± 0.05 at normal nuclear matter density [49], which is able to account for a good reproduction of isoscalar quadrupole giant resonances data in doubly closed-shell nuclei [50], whereas the nucleon isovector effective mass is not properly known [51]. Mean field model predictions about neutron—proton effective mass splitting in isospin ANM are not in agreement with the results obtained in microscopic calculations. For an example, relativistic mean field (RMF) models predict that the proton effective mass m* is larger than the neutron one mn [52—55] which is opposite to the results of microscopic calculations. In the nonrelativistic frame, the Skyrme (except SLy sets [56—58]) and Gogny forces [59—63] predicts np effective mass splittings which are in agreement with the microscopic result mn > mp.

The nonrelativistic finite-range effective interactions, where usually very simple parameterizations of the energy density and mean fields are used, give the simplest possible way to simulate the momentum and density dependence of isoscalar and isovector parts of nuclear mean field as well as nuclear effective mass. It is noticed that the existing controversies on the two opposite types of neutron and proton effective mass splitting and the extremely opposite nature of nuclear symmetry energy at high densities as predicted by different theoretical models are a result of choice of parameters.

In our present paper, we extract nuclear symmetry energy as well as isoscalar and isovector effective mass using a finite-range effective interaction having Yukawa form [64, 65]. Though we have discussed the problem in our earlier work [65] as a part, we present here a more elaborative study on the isoscalar and isovector effective mass splitting. The results are also compared with SLy2, SKM, f-, f0, and f+ [45] forms of interactions. In Section 2, the theoretical formalism for ANM with the effective interaction is discussed. We present the general expression for neutron and proton effective mass splitting in Section 3 and the same in terms of symmetry energy and its density slope based on HVH theorem in Section 4. The conclusions are presented in Section 5.

2. FORMALISM In the present work, we have used a simple density-dependent finite-range effective interaction [64, 65]

where f (r) represents a short-range interaction of conventional form such as Yukawa, Gaussian or exponential, and specified by a single range parameter A. The other symbols in Eq. (1) have their usual meanings. This form of effective interaction is very similar to Skyrme type of interactions except for the fact that the ti and t2 terms in the latter case have been replaced by the short-range interaction (W + BPa - HPt - MPaPt) f (r). Such a replacement is essential to ensure a description leading to vanishing exchange interaction between a pair of nucleons of very large relative momenta. = ^(1 + + ■ cr2) and PT = + ri • r2) are the spin- and isospin-exchange operators, respectively. This simple effective interaction is found to have a zero-range density-dependent part similar to Skyrme-type interaction and long-range density independent part of conventional form such as Yukawa, Gaussian, and Exponential. The energy density in ANM derived from this effective interaction can be written as h2 T f

At zero temperature f (k) is described by a step function

The parameters EQ, E'q, El(, Eul, Elex, E'Ul are related to the interaction parameters as given in [66].

The neutron—proton single-particle energy, which is the functional derivative of the energy density H(p, [), can be expressed as

where t = n or p. For the interaction defined in Eq. (1), the nuclear mean fields for ANM can be obtained as

for Yukawa form of interaction. The +/— before the 2nd square-brackete