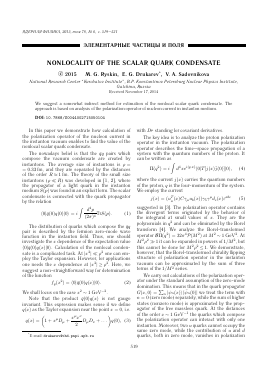 NONLOCALITY OF THE SCALAR QUARK CONDENSATE

We suggest a somewhat indirect method for estimation of the nonlocal scalar quark condensate. The approach is based on analysis of the polarization operator of nucleon current in instanton medium.

In this paper we demonstrate how calculation of the polarization operator of the nucleon current in the instanton vacuum enables to find the value of the nonlocal scalar quark condensate.

The nowadays belief is that the qq pairs which compose the vacuum condensate are created by instantons. The average size of instantons is p = = 0.33 fm, and they are separated by the distances of the order R & 1 fm. The theory of the small size instantons (p < R) was developed in [1, 2], where the propagator of a light quark in the instanton medium S(p) was found in an explicit form. The scalar condensate is connected with the quark propagator by the relation

The distribution of quarks which compose the qq pair is described by the fermion zero-mode wave function in the instanton field. Thus, one should investigate the x dependence of the expectation value (0|q"(0)q(x)|0). Calculation of the nonlocal condensate is a complicated task. At lx2l < p2 one can employ the Taylor expansion. However, for applications one needs the x dependence at lx2l > p2. Here, we suggest a non-straightforward way for determination of the function

Note that the product q(0)q(x) is not gauge invariant. This expression makes sense if we define q(x) as the Taylor expansion near the point x = 0, i.e.

with D^ standing for covariant derivatives.

where the current j(x) carries the quantum numbers of the proton, q is the four-momentum of the system. We employ the current

suggested in [3]. The polarization operator contains the divergent terms originated by the behavior of the integrand at small values of x. They are the polynomials in q2 and can be eliminated by the Borel transform [4]. We analyze the Borel-transformed operator Bn(q2) = 32n4P(M2) at M2 - 1 GeV2. At M2p2 » 1 it can be expanded in powers of 1/M2, but this cannot be done for M2p2 < 1. We demonstrate, however, that the Borel-transformed chirality flipping structure of polarization operator in the instanton vacuum can be approximated by the sum of three terms of the 1/M2 series.

We carry out calculations of the polarization operator under the standard assumption of the zero-mode domination. This means that in the quark propagator G(x, 0) = ^2n (x))($n(0)l we treat the term with n = 0 (zero mode) separately, while the sum of higher states (nonzero mode) is approximated by the propagator of the free massless quark. At the distances of the order x — 1 GeV-1 the quarks which compose the polarization operator can interact with only one instanton. Moreover, two u quarks cannot occupy the same zero mode, while the contribution of u and d quarks, both in zero mode, vanishes in polarization

operator with current (5) due to its spin structure. Thus, we include the instanton effects only in one propagator, which can be written as

On the other hand, one can present the chirality flipping component of polarization operator as

If the function f (x2) can be approximated as

in the region x2 < 1 GeV-2, one can present the coefficients cn in terms of the coefficients of expansion of the Borel-transformed polarization operator. Here x2 is presented in Euclidean metric. Note that the right-hand side of Eq. (8) cannot be treated as the lowest terms of the Taylor series for the function f (x2). The terms x2n with n > 3 of the Taylor series would provide the divergent terms caused by large x behavior of the integrands in the integrals on the right hand side of (7). Such terms are not eliminated by the Borel transform.

In the medium of the small size instantons the u quarks and d quarks of polarization operator are described by the first and second terms of the propagator (6) correspondingly. To obtain results in analytical form we parameterize the dynamical quark

Consistency of the left-hand side (solid line) and the right-hand side (dashed line) of Eq. (12) for the QCD vacuum filled solely by the small size instantons(ws =1). The values Ci and C2 are given by Eq. (15).

On the other hand, we can write employing Eq. (8)

The accuracy of the solution is illustrated by figure. Employing Eq. (14) we find c1 = —0.16 GeV2 and c2 = 0.017 GeV4. The nonlocality of the quark condensate can be described by the function

NONLOCALITY OF THE SCALAR QUARK CONDENSATE

Note that much more complicated calculations of the function f (x2) in the framework of the instanton liquid model [5] provided k & —0.1 at x2 = 1 GeV-2.

There were several moves to estimate the parameter m0 defined as

with Gt^v the tensor of the gluon field. This parameter may be used to characterize the quark condensate nonlocality since it is connected with second derivative at x2 = 0 via the equation of motion. For the massless quark

and thus m2 determines the lowest-order term of the Taylor series for the function f (x2), i.e.

The lattice calculations [6] provided m2 = 1.1 GeV2. The value of m0 was evaluated also from the nucleon QCD sum rules analysis, where it was chosen to obtain the best fit between the two sides of the sum rules. The estimation of [7] gave m2 = 0.8 ±

± 0.4 GeV2 [7], while a smaller value m2 = 0.2 GeV2 was proposed in [8]. Note that the value of m0 determines only the lowest-order term of the Taylor expansion of the condensate near the point x2 = 0, while in the sum rule analysis it actually imitates the whole effect of nonlocality of the scalar condensate. Therefore these estimations of the value of m0 are consistent with our results.

Thus, our results are consistent with those obtained in other approaches. They can be used in applications. For example, they can be employed in the analysis of the baryon QCD sum rules in the instanton medium, where the straightforward employing of the operator product expansion is not possible [10].