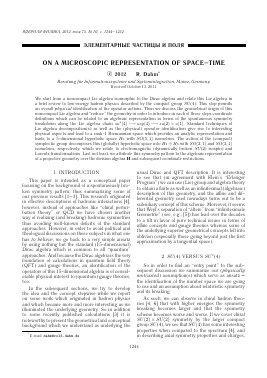 ON A MICROSCOPIC REPRESENTATION OF SPACE-TIME

We start from a noncompact Lie algebra isomorphic to the Dirac algebra and relate this Lie algebra in a brief review to low-energy hadron physics described by the compact group SU(4). This step permits an overall physical identification of the operator actions. Then we discuss the geometrical origin of this noncompact Lie algebra and "reduce" the geometry in order to introduce in each of these steps coordinate definitions which can be related to an algebraic representation in terms of the spontaneous symmetry breakdown along the Lie algebra chain su*(4) —> usp(4) —> su(2) x u(1). Standard techniques of Lie algebra decomposition(s) as well as the (physical) operator identification give rise to interesting physical aspects and lead to a rank-1 Riemannian space which provides an analytic representation and leads to a 5-dimensional hyperbolic space H5 with SO(5,1) isometries. The action of the (compact) symplectic group decomposes this (globally) hyperbolic space into H2 Ф H3 with SO(2,1) and SO(3,1) isometries, respectively, which we relate to electromagnetic (dynamically broken SU(2) isospin) and Lorentz transformations. Last not least, we attribute this symmetry pattern to the algebraic representation of a projective geometry over the division algebra H and subsequent coordinate restrictions.

This paper is intended as a conceptual paper focusing on the background of a spontaneously broken symmetry pattern, thus summarizing some of our previous results [1—3]. This research originated in effective descriptions of hadronic interactions [4], however, instead of approaches like "chiral perturbation theory" or QCD we have chosen another way of realizing (and breaking) hadronic symmetries thus avoiding well-known deficits of the standard approaches. However, in order to avoid political and theological discussions on these subjects in what one has to believe, we go back to a very simple ansatz by using nothing but the standard (15-dimensional) Dirac algebra which is common to all "quantum" approaches. And because the Dirac algebra is the very foundation of calculations in quantum field theory (QFT) and gauge theories, an identification of the operators of this 15-dimensional algebra is of considerable physical interest to (quantum) gauge theories, too.

In the subsequent sections, we try to develop the idea and the concept stepwise while we report on some work which originated in hadron physics and which became more and more interesting as we illuminated the underlying geometry. So in addition to some recently published calculations [3] it is noteworthy to present the geometrical and conceptual background which we understand as underlying the

usual Dirac and QFT description. It is interesting to see that (in agreement with Klein's "Erlanger Program") we can use (Lie) group and algebra theory to obtain a finite as well as an infinitesimal (algebraic) description of this geometry, and the affine and differential geometry used nowadays turns out to be a subsidiary concept of this scheme. Moreover, it seems that Weyl's separation of "altere" from "infinitesimale Geometrie" (see, e.g., [5]) has lead over the decades to a tilt in favor of pure technical issues in terms of affine concepts and gauge theories whereas some of the underlying superior geometrical concepts fell into oblivion (especially those going beyond just the first approximation by a tangential space).

So in order to find an "entry point" to the subsequent discussion we summarize our (physically motivated) assumption(s) which serve as ansatz — the identification of the number space we are going to use and an assumption about relativistic symmetry and its breaking.

As such, we can observe in chiral hadron theories [4, 6] that with higher energies the symmetry breaking becomes larger and that the symmetry scheme becomes worse and worse. If we cover chiral SU(2) x SU(2) symmetry by the larger compact group SU(4), we see that SU(4) has some interesting properties when compared to the spectrum [4], and in describing axial symmetry properties and charges,

however, the SU(4) multiplets are not realized as (Wigner—Weyl) supermultiplets in the spectrum. Nevertheless, counting multiplet members and spin— isospin quantum numbers in the spectrum, the SU(4) dimensions can be identified if we group observable (distributed) multiplets together [4]. Moreover, it is known from other observations, e.g., in nuclear physics that SU(4) can serve as a good low-energy symmetry, although it is broken for higher energies.

So instead of writing the (nonlinear) chiral transformation in terms of (complexified) Pauli matrices (which is a certain representation but mathematically and physically misleading) we choose a description in terms of real quaternions right from the beginning. Yes, at a first glance this seems to be artificial, however, we benefit twice from the fact that the (real) quaternions constitute a division algebra: mathematically in that we have well-defined inverses throughout our calculations, and we can use a well-defined and consistent division when working with the real quaternions, thus avoiding some magic (commuting) "i"s which otherwise occur at various places within the calculations. This obvious benefit allows to treat nonlinear chiral transformations completely instead of calculating with certain awkward "expansions" and/or weakly justified "power series". The much larger advantage, however, is an identification of usual chiral transformations as subsets of quater-nionic Mobius transformations which of course suggests to study a projective quaternionic geometry and start from scratch with geometry. Physically we benefit in that this identification is much closer to the physical measurement process and much more evident in that we compare a certain measure (respectively, an observable) with a known unit measure at various distances, i.e. we need unique inverses to compare with the unit by dividing the unit, and we need the full tool set of a projective geometry, too, to transport and scale the observations appropriately.

This simple reasoning leads to the symmetry group Sl(2, H) which one can embed into complex spaces using appropriate coordinate sets and 2 x 2 matrix representations (see, e.g., [7] or [8]) so that we obtain the isomorphic noncompact symmetry group SU*(4) on complex representation spaces. Simple calculations show that (up to a misplaced and additional commuting "i" in the usual definition) the operators of the Dirac algebra are isomorphic to the Lie algebra generators su*(4). Hence, it is self-evident to understand the occurence of an SU(4) symmetry at low energies as an approximation, respectively, as the remnant of the original relativistic symmetry SU*(4). Following this reasoning, the "difference" in the Lie algebras su(4) and su*(4) has to be responsible for dynamics, whereas the (compact) part common to both su(4) and su*(4) should generate dynamically

further observable symmetries (as isotropy group). Last not least, we can use the spin—isospin construction of SU(4) with its physical operator identification as well as the state identification (see [4, 6]) in order to check the physical significance of our calculations and results.

The technical machinery to investigate such issues more precisely is well known from Lie algebra theory, and we find a compact subgroup USp (4) of dimension 10 of both SU(4) and SU*(4) as well as a 5-dimensional operator set p mapped by the exponential onto a coset space exp(p) which we can identify with SU * (4)/USp(4). So we find a spontaneously broken symmetry with a (local) USp (4) symmetry group (see also [2] and [3]). This is an irreducible Riemannian globally symmetric space (type AII, [7]) which we can describe technically in terms of a nonlinear sigma model with appropriate representations (or by differential geometry/ fiber bundles with local USp (4) symmetry or induced representations, respectively). Here, however, we postpone the technical details and focus instead on the geometrical background in terms of "altere Geometrie". Why? First of all, we have to identify and define suitable coordinates and appropriate coordinate (transformation) rules which we can use in a second step to perform calculations, i.e. they serve as an appropriate (algebraic) representation of this geometry. it is only the very last step that we need to use affine coordinates and concepts, which then results in "local" coordinate systems with emphasized points (or special (restricted) transformation structures), or which results in certain representations) for objects to which we then attribute physical properties or behavior and where we can apply certain optimization (or action) principles like Lagrangian or (by using "more suitable" coordinate definitions) Hamiltonian formalisms to extract (infinitesimal) properties in terms of equations of motion. We will see that we can short-circuit some of these typical standard mechanisms by using geometry to understand the vacuum structure and write down the geodesics to determine the physical behavior so that infinitesimal equations provide no more information than the finite representation.

In some preceding publications, we have already presented the picture given in Fig. 1 which can be seen in analogy to the Riemannian case based on the division algebra C.

However, the figure in the given form already anticipates some preceding and important steps which are already incorporated in the given definition of points and axes but which otherwise would allow for additional degrees of freedom. So at next, we follow