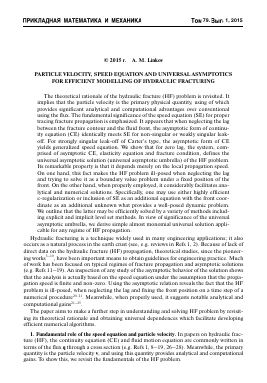 The theoretical rationale of the hydraulic fracture (HF) problem is revisited. It implies that the particle velocity is the primary physical quantity, using of which provides significant analytical and computational advantages over conventional using the flux. The fundamental significance of the speed equation (SE) for proper tracing fracture propagation is emphasized. It appears that when neglecting the lag between the fracture contour and the fluid front, the asymptotic form of continuity equation (CE) identically meets SE for non-singular or weakly singular leak-off. For strongly singular leak-off of Carter's type, the asymptotic form of CE yields generalized speed equation. We show that for zero lag, the system, comprised of asymptotic CE, elasticity equation and fracture condition, defines the universal asymptotic solution (universal asymptotic umbrella) of the HF problem. Its remarkable property is that it depends merely on the local propagation speed. On one hand, this fact makes the HF problem ill-posed when neglecting the lag and trying to solve it as a boundary value problem under a fixed position of the front. On the other hand, when properly employed, it considerably facilitates analytical and numerical solutions. Specifically, one may use either highly efficient c-regularization or inclusion of SE as an additional equation with the front coordinate as an additional unknown what provides a well-posed dynamic problem. We outline that the latter may be efficiently solved by a variety of methods including explicit and implicit level set methods. In view of significance of the universal asymptotic umbrella, we derive simple almost monomial universal solution applicable for any regime of HF propagation.

Hydraulic fracturing is a technique widely used in many engineering applications; it also occurs as a natural process in the earth crust (see, e.g. reviews in Refs 1, 2). Because of lack of direct data on the hydraulic fracture (HF) propagation, theoretical studies, since the pioneering works3-10, have been important means to obtain guidelines for engineering practice. Much of work has been focused on typical regimes of fracture propagation and asymptotic solutions (e.g. Refs 11-19). An inspection of any study of the asymptotic behavior of the solution shows that the analysis is actually based on the speed equation under the assumption that the propagation speed is finite and non-zero. Using the asymptotic relation reveals the fact that the HF problem is ill-posed, when neglecting the lag and fixing the front position on a time step of a numerical procedure20, 21. Meanwhile, when properly used, it suggests notable analytical and computational gains21-25.

The paper aims to make a further step in understanding and solving HF problem by revisiting its theoretical rationale and obtaining universal dependences which facilitate developing efficient numerical algorithms.

1. Fundamental role of the speed equation and particle velocity. In papers on hydraulic fracture (HF), the continuity equation (CE) and fluid motion equation are commonly written in terms of the flux q through a cross section (e.g. Refs 1, 8-19, 26-28). Meanwhile, the primary quantity is the particle velocity v, and using this quantity provides analytical and computational gains. To show this, we revisit the fundamentals of the HF problem.

The speed and continuity equations. Consider an arbitrary volume V (Fig. 1), at points of which a function (x, t) of the spatial position x and a parameter t are prescribed. In general, the boundary S(t) of the volume also depends on the parameter t. We are interested in the derivative of the volumetric integral J ^ p(x, t)dV with respect to the parameter. The evaluation of

the derivative is a purely analytical problem. When the volume V(t) is assumed filled with a continuous medium, while the function p(x, t) represents a property of the medium, the differentiation rule is given by equation (e.g. Ref. 29):

where un is the normal component of the particle velocity v at the boundary S(t), t is the time. We emphasize that Eq. (1.1) is the essentially analytical result; it does not involve equations of motion and physical properties of a medium. In Western literature it is called Reynolds transport theorem (e.g. Ref. 30).

By derivation of Eq. (1.1), the normal component un of the particle velocity at a point x* of the moving surface S(t) equals to the speed u* of the surface propagation at this point:

Equation (1.2), called sometimes the Stefan condition (e.g. Ref. 10), is fundamental in the sense that it employs only the concept of the continuum mechanics regarding to the particle velocity as the complete derivative of the material point coordinate with respect to time. It does not involve conservation laws, dynamic equations and constitutive equations. In further discussion, we shall use the terminology of the theory of propagating interfaces (e.g. Ref. 31) and call it the speed equation (SE).

Apply Eq. (1.2) to the HF problem. In this case, a medium may be assumed incompressible and homogeneous. Then identifying the function p(x, t) with the mass density, it is constant in time and space. Hence the volumetric integral on the right hand side of Eq. (1.1) is zero, and the equation takes the form

where Ve is the volume of a fluid. Use now the mass conservation law. For an incompressible fluid it expresses the volume conservation. Then the left hand side of Eq. (1.3) represents the change of the total material volume Ve of the fluid, caused by external sources and/or sinks at the points of the considered spatial volume V(t).

When applying Eq. (1.3) to a flow in a narrow channel (Fig. 2), the surface S consists of the channel walls S+, S_ and the surface SL along the fluid edge contour L. Take the local z axis

along the outer normal n+ to the boundary S+. Denote u+ and u- the z components of the displacement of the walls S+, S_, respectively, at points located symmetrically about the middle surface Sm of the channel. For the normal velocity component at the walls, we have

For the channel edges, we have dSL = wLdL, where wL is the channel width (opening) at L. Then the right hand side of Eq. (1.3) becomes

tion (1.2), when specified for the channel edge (contour L.), reads

In Eq. (1.5), both the particle velocity and the speed are averaged over the opening at L .

For the first time, in hydraulic fracture studies, the speed equation (1.5) was distinguished by Kemp10, who used it for solving the Nordgren's8 problem. Still its significance had not been comprehended for twenty subsequent years. Recently it was re-discovered (Ref. 20), and its key role has been clearly demonstrated for proper tracing fracture propagation, for obtaining

simple analytical solutions and for developing efficient numerical techniques (Refs. 20—25). Below we consider the extension of SE to the case of strongly singular leak-off (Sec. 2) and obtain its universal asymptotic form (Sec. 4).

For sources and/or sinks, distributed with the density qt in the channel, the total inflow (outflow) of the fluid is

where we use the minus sign to have qt positive in the case, when this term corresponds to a fluid leak-off from a HF into a rock formation. Then, by using Eqs (1.4) and (1.5) in (1.3) and applying Gauss—Ostrogradskii theorem, we obtain the Reynolds transport theorem for a flow of an incompressible fluid in a narrow channel under the mass conservation law

Being applicable to any part of the fluid in the channel, Eq. (1.6) yields the differential form

This is the common continuity equation (CE) of the HF problem.

where C, and P, are constants of leak-off, t - t* is the time elapsed since the moment t*, when the fluid front had reached a considered point. In the commonly considered case of Carter's leak-off 4, P, = 1/2.

Note that in their primary formulation, both Eqs (1.6) and (1.7) contain the particle velocity v. The product wu expresses the flux through a cross section of a channel of width w:

As mentioned, most of the papers on HF employ the form (1.10) of CE. Still, to avoid confusion and errors when formulating, analysing and solving HF problems, it is necessary to clearly understand that the primary physical quantity is the particle velocity v, while the flux q appears only by the definition (1.9). Recall also that the particle velocity enters the fundamental SE, which in its primary form (1.5) employs neither incompressibility of a fluid, nor the conservation law.

where aZT is the shear stress on the wall, for which the z axis is directed inside the channel, t is the particle velocity direction, y = 2s zT is the doubled shear strain rate, M is the consistency index, n is the behaviour index. For a flow in a narrow channel, the component of the particle velocity normal to walls is assumed small as compared with the in-plane component. Then the