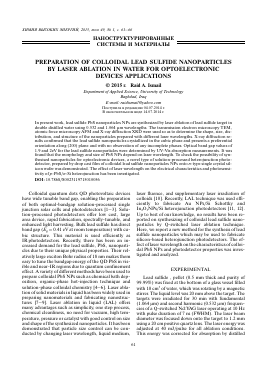 Colloidal quantum dots QD photovoltaic devices have wide tunable band gap, enabling the preparation of both optimal-bandgap solution-processed single junction solar cells and photodetectors [1—3]. Solution-processed photodetectors offer low cost, large area device, rapid fabrication, spectrally-tunable, and enhanced light harvesting. Bulk lead sulfide has direct band gap (Eg = 0.41 eV at room temperature) with cubic structure. This material is used efficiently as IR photodetectors. Recently, there has been an increased demand for the lead sulfide, PbS, nanoparticles due to their unique physical properties. Their relatively large exciton Bohr radius of18 nm makes them easy to tune the bandgap energy of the QD PbS in visible and near-IR regions due to quantum confinement effect. A variety of different methods have been used to prepare colloidal PbS NPs such as chemical bath deposition, organic-phase hot-injection technique and solution-phase colloidal chemistry [4—6]. Laser ablation of solid materials in liquid has been widely used in preparing nanomaterials and fabricating nanostruc-tures [7—9]. Laser ablation in liquid (LAL) offers many advantages such as simplicity, one step process, chemical cleanliness, no need for vacuum, high temperature, pressure or catalyst with good control on size and shape of the synthesized nanoparticles. It has been demonstrated that particle size control can be conducted by changing laser wavelength, liquid medium,

laser fluence, and supplementary laser irradiation of colloids [10]. Recently, LAL technique was used efficiently to fabricate Au NPs/Si Schottky and In2O3NPs/Si heterojunction photodetectors [11, 12]. Up to best of our knowledge, no results have been reported on synthesizing of colloidal lead sulfide nanoparticles by Q-switched laser ablation technique. Here, we report a new method for the synthesis of lead sulfide nanoparticles which may be used to fabricate silicon-based heterojunction photodetectors. The effect oflaser wavelength on the characteristics of colloidal PbS NPs and photodetector properties was investigated and analyzed.

Lead sulfide , pellet (0.5 mm thick and purity of 99.99%) was fixed at the bottom of a glass vessel filled with 10 cm3 of water, which was rotating by a magnetic stirrer. The liquid level was 20 mm above the target. The targets were irradiated for 30 min with fundamental (1.064 ^m) and second harmonic (0.532 ^m) frequencies of a Q-switched Nd:YAG laser operating at 10 Hz with pulse duration of 7 ns (FWHM). The laser beam diameter was focused down onto the target to 1.2 mm using a 20 cm positive quartz lens. The laser energy was adjusted at 40 mJ/pulse for all ablation conditions. This energy was corrected for absorption by distilled

water. After laser ablation, the colloidal suspensions were drop-casted on cleaned corning glass and silicon substrates, and then dried at 80°C for 30 min using vacuum furnace. Many techniques were used here for

the characterization of the produced PbS NPs. The optical absorbance of the synthesized colloidal PbS NPs deposited on glass substrate in the UV-Vis region was recorded using a spectrophotometer (type Metertech). Structural studies were carried out using Shimadzu 6000 X-ray diffractometer, with Cu-Z"a radiation at 0.15418 nm wavelength to investigate the properties of PbS NPs. The size and shape of the lead sulfide nano-particles were examined using CM10 pw6020 Philips transmission electron microscope (TEM). The surface morphology of the lead sulfide nanoparticles was investigated by atomic force microscope (AFM) model SPM AA 3000 Angstrom. To fabricate a heterojunc-tion photodetector, a thin film of PbS NPs is deposited on 10 fi cm «-type (100)-oriented silicon by dropcasting technique. To increase the coverage of lead sulfide nanoparticles, multiple layers deposition and condensation of colloidal suspension were performed as shown in Fig. 1. It can be noticed that the PbS particles are closely packed and no vacancies were noticed. A film thickness of 400 nm was measured using a laser interferometer. High purity aluminum ohmic contacts were deposited on the PbS layer and the back side of the Si wafer through a special mask using thermal resistive technique. The scheme of PbS NPs/Si hetero-junction photodetector architecture is presented in Fig. 2. The photodetector has a sensitive area of 40 mm2. All the heterojunction properties are investigated at room temperature. Curren-voltage (I-V) characteristics of the photodetector under dark and illumination are measured. Capacitance-voltage (C-V) measurements were conducted using LCZ meter operating at 200 KHz frequency. Spectral responsivity of the het-erojunction photodetector was measured in the spectral range of200—1100 nm using a monochromator after calibrating the power with a silicon power meter. The figures of merit of PbS NPs/«-Si heterojunction photodetector were investigated.

The color of suspension has changed from colorless to brownish black after the PbS laser ablation, as depicted in Fig. 3, indicating the production of lead sulfide colloidal nanoparticles. The PbS colloidal solution color ablated with 0.532 ^m laser is lighter than that ablated with 1.064 ^m laser as evidenced in Fig. 3.

Figure 4 shows the XRD patterns of PbS layer deposited on glass substrate prepared with different laser wavelengths. Well-defined diffracted peaks at (111), (200) and (220) planes which correspond to diffraction angles of 26°, 30° and 43°, respectively, for PbS (JCPDS 5—592) cubic structure were observed. The patterns confirm the polycrystalline nature of the synthesized PbS with preferred orientation along (200) plane. No other phases were noticed in the XRD spectra. The lattice constants were calculated and found to be 0.589 and 0.586 nm for PbS layers prepared by 0.532- and 1.064-^m laser, respectively,

which are very close to that for bulk PbS (0.59 nm). The average nanocrystal size of PbS in film was determined using Debye—Scherrer equation:

where X is the X-ray wavelength (0.15418 nm), P is line broadening at half the maximum intensity (FWHM), and 9 is the Bragg angle. The average crystal size of the PbS particles synthesized with 1.06 and 0.532 ^m lasers were found to be around 51 and 45 nm, respectively. The absorption spectra of colloidal solutions synthesized by ablating lead sulfide target with 0.532 and 1.064 ^m laser are shown in Fig. 5. In this figure absorption peaks around 339 nm and to 362 nm wavelengths were observed for PbS nanoparticles prepared with 1.064 and 0.532 ^m, respectively.

This can be ascribed to the exciton band (quantum size effect) with a long tail after 366 nm, usually observed in data reported for colloidal solution probably due to size inequality of the ablated particles [13]. The absorbance of the PbS ablated with 1.064 ^m laser is higher than that ablated with 0.532 ^m laser due to the higher ablation efficiency and therefore the self-absorption efficiency by PbS colloids at shorter wavelengths [7].

Figure 6 shows a linear relation between (ahv)2 and (hv) indicating the presence of direct transition. The

energy gaps of the films were calculated by the extrapolation of the straight line in Fig. 6 to the photon energy axis. The values of effective energy gap of PbS NPs prepared by 0.532 and 1.064 ^m laser wavelengths are 2 and 1.9 eV, respectively. It is obvious that the PbS NPs prepared with 0.532 ^m laser has larger band energy gap