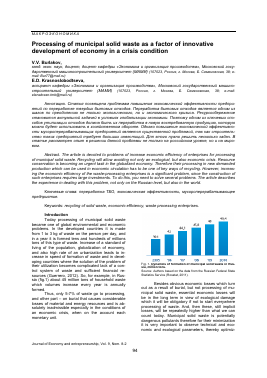 Abstract. The article is devoted to problems of increase economic efficiency of enterprises for processing of municipal solid waste. Recycling will allow avoiding not only an ecological, but also economic crisis. Resource conservation is becoming an urgent task in the globalized economy. Therefore their processing in new demanded production which can be used in economic circulation has to be one of key ways of recycling. However, increasing the economic efficiency of the waste-processing enterprises is a significant problem, since the construction of such enterprises requires large investments. To do this, you need to solve several problems. The article describes the experience in dealing with this problem, not only on the Russian level, but also in the world.

Today processing of municipal solid waste became one of global environmental and economic problems. In the developed countries it is made from 1 to 3 kg of waste on the person per day, and in a year it is formed tens and hundreds of millions tons of this type of waste. Increase of a standard of living of the population, globalization of economy, and also high rate of an urbanization leads to increase in speed of formation of waste and in developing countries where the solution of the problem of their utilization becomes complicated lack of a control system of waste and sufficient financial resources (Guerrero, 2012). So, for example, in Russia (fig.1) about 45 million tons of household waste which volumes increase every year is annually formed.

Thus, only 5-7% of waste go to processing, and other part - on burial that causes considerable losses of material and energy resources and is absolutely inadmissible especially in the conditions of an economic crisis, when on the account each monetary unit.

Source: Authors based on the data from the Russian Federal State Statistics Service (Rosstat, 2011).

Besides obvious economic losses which turn out as a result of burial, but not processing of municipal solid waste, essential economic losses will be in the long term in view of ecological damage which it will be obligatory if not to start everywhere processing of waste. And, then these, still implicit losses, will be repeatedly higher than what we can count today. Municipal solid waste is potentially dangerous pollutants therefore for their minimization it is very important to observe technical and economic and ecological parameters, thereby optimiz-

V.V. Burlakov, E.D. Krasnoslobodtseva Processing of municipal solid waste as a factor of innovative development of economy in a crisis condition

Therefore, processing whereas movement of waste on grounds has to make small percent, that is, only that it isn't possible to overwork any more has to be a main objective of work with waste, first of all. (Burlakov & Krasnoslobodtseva, 2015)

In many countries, the main way of dealing with waste is to bury them in ground and, at worst, uncontrolled environmental services landfills. So for example, in Russia the total area of ground and dumps makes 4 million hectares that is comparable to the area of the territory of the Netherlands. Products of disintegration of waste, certainly, negatively influence quality of environment, and, consequently, on public health, recovery of which requires large material costs.

In a different way recycling burning which costs much dearer, especially in that case when the used thermal technologies provide lack of negative influence on environment is. Also, at this option of utilization of municipal solid waste there is a formation of toxic ashes, and construction of incineration plants demands big investments. According to the expert of Greenpeace, investments into burning of garbage make 500-600 euros for ton. Besides, waste from burning is also taken out on grounds. In comparison with the excess power of incineration plants in EU countries, in Russia this number doesn't exceed 10 that, certainly, don't allow coping with the increasing number of waste (tab.2).

Number of incineration plants in EU countries and their average power

To use waste in the form of new demanded production, their processing which provides rational use of natural resources is necessary. In many countries this principle is one of the most important steps on the way to "sustainable" development. It is observed a progressive refusal of using ground in European countries and 30-35% of waste is overworked. Thus, in Germany this index is sufficiently high (65%) which is achieved by processing both

own and imported waste from the nearest countries where there is not enough capacity. For example, the most of plastic waste that cost more than 50 million of euro was brought to Germany from the Czech Republic. However, despite this fact a share of packaging recycling (paper and plastic packaging, glass) is sufficiently high and amount 72% (Schulze, 2015). The level of municipal waste processing in Russia doesn't exceed 5% at the present moment and the other percentage goes to ground what leads to loss of material and power resources.

One of the less developed methods of waste utilization is the organic component's composting. According to Israel's investigations 90% of organic waste may be used as compost instead of fertilizer. But the absence selective gathering of this kind of waste leads to the disposal of the most part of it, as a result we can observe the loss of 102 million dollars a year (Kan, 2010).

The basic methods of solid municipal waste utilization are burning and burial. Both of these methods have their pros and cons. Burial is cheaper, but scientists at the moment can't predict its future effect on environment and human activity. Burning is much more expensive method especially when people use technologies which prevent the negative influence on the environment.

2 Determining facts of developing of the waste recycling

It is necessary to construct waste facilities for solid municipal waste processing. And it requires large investments, but payback of projects for the construction of such enterprises is about 10 years. To raise economic efficiency people should abide by a number of factors.

One of the main factors is permanent supply waste-processing enterprises by secondary resources. That requires the expansion of system of stationary and mobile reception centers of secondary fractions. It will cause high transport costs waste transporting companies that is about 85% of the total cost. The data analysis shows that usage of the waste transfer stations reduces transport costs for 30% (Lasaridi, 2006).

The other problem of developing of waste recycling is that separate waste gathering which raises both quantity and quality doesn't function in all countries. The investigations in Denmark (Edjabou et al, 2015) show the methodology for determining the morphological composition of municipal waste. In total 17 tons of waste were sorted into 10-50 waste fractions, and the share of food waste was 40-45%. It was also mentioned that the waste composition didn't depend on the speed of its formation and was the same in all three municipalities.

Selective waste collecting and optimal location of waste transfer stations is the one of the effective instrument in waste processing management. To deal with these issues, Toso E.A.V u Alem, D. propose a deterministic version of the classical capacity facility location problem, and both a two-stage

recourse formulation and risk-averse models to reduce the variability of the second-stage costs. Numerical results suggest that it is possible to improve the current selective collection, as well as hedge against