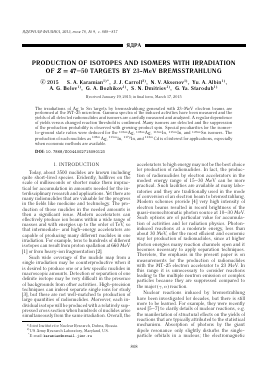 The irradiations of Ag to Sn targets by bremsstrahlung generated with 23-MeV electron beams are performed at the MT-25 microtron. Gamma spectra of the induced activities have been measured and the yields of all detected radionuclides and isomers are carefully measured and analyzed. A regular dependence of yields versus changed reaction threshold is confirmed. Many isomers are detected and the suppression of the production probability is observed with growing product spin. Special peculiarities for the isomer-to-ground state ratios were deduced for the 106mAg, 108mAg, 113mIn, 115mIn, and 123mSn isomers. The production of such nuclides as 108m Ag,115mIn,117flIn, and 113mCd is of interest for applications, especially when economic methods are available.

Today, about 3500 nuclides are known including quite short-lived species. Evidently, halflives on the scale of milliseconds or shorter make them impractical for accumulation in amounts needed for the interdisciplinary research and applications. Yet there are many radionuclides that are valuable for the progress in the fields like medicine and technology. The production of those nuclides in the needed amounts is then a significant issue. Modern accelerators can effectively produce ion beams within a wide range of masses and with energies up to the order of TeV, so that intermediate- and high-energy accelerators are capable of producing many different nuclides in one irradiation. For example, tens to hundreds of different isotopes can result from proton spallation at 660 MeV [1] or from heavy-ion fragmentation [2].

Such wide coverage of the nuclide map from a single irradiation may be counterproductive when it is desired to produce one or a few specific nuclides in macroscopic amounts. Detection or separation of one definite isotope may be very difficult in the presence of backgrounds from other activities. High-precision techniques can indeed separate single ions for study [3], but these are not well-matched to production of large quantities of radionuclides. Moreover, each individual isotope will be produced with a relatively suppressed cross section when hundreds of nuclides arise simultaneously from the same irradiation. Overall, the

2)US Army Research Laboratory, Maryland, US.

accelerators to high energy may not be the best choice for production of radionuclides. In fact, the production of radionuclides by electron accelerators in the modest energy range of 15—30 MeV can be more practical. Such facilities are available at many laboratories and they are traditionally used in the mode of conversion of an electron beam to bremsstrahlung. Modern schemes provide [4] very high intensity of electron beams resulted in record brightness of the quasi-monochromatic photon source at 10—30 MeV. Such options are of particular value for accumulation of activities and for radiation physics. Photon-induced reactions at a moderate energy, less than about 30 MeV, offer the most efficient and economic way for production of radionuclides, since at higher photon energies many reaction channels open and it becomes necessary to apply separation techniques. Therefore, the emphasis in the present paper is on measurements for the production of radionuclides with the MT-25 electron accelerator to 23 MeV. In this range it is unnecessary to consider reactions leading to the multiple neutron emission or complex particles because they are suppressed compared to the major (y, n) reaction.

Nuclear reactions induced by bremsstrahlung have been investigated for decades, but there is still more to be learned. For example, they were recently used [5—7] to clarify details of nuclear reactions, e.g. the manifestation of structural effects on the yields of reactions that are typically attributed to the statistical mechanism. Absorption of photons by the giant dipole resonance only slightly disturbs the single-particle orbitals in a nucleus; the electromagnetic

wave impacts the nucleus as an object of definite size and shape since the wavelength for 15-MeV photons is comparable to the nuclear dimension, not to the size of the constituent particles. Thus, shell-model orbitals survive after photon absorption and their quantum numbers may influence the reaction yield with specific microstructure factors, in addition to the regular statistical ones. The statistical regularities visible in experimental yields are described [5] in a form of separate factors reflecting the reaction threshold and the spin difference between initial and final configurations. Nevertheless, some other structural effects in the reaction yields are newly found [6, 7] in reactions induced by photons and neutrons at low energies.

For this work, activation experiments were performed using the MT-25 microtron of the Flerov Laboratory of Nuclear Reactions, Joint Institute for Nuclear Research. A 23 MeV electron beam of a power up to 0.3 kW was incident upon a tungsten "convertor" with 4 mm thickness. The residual energy of electrons was absorbed in the Al radiator with 25 mm thickness and the targets were placed for activation just behind this assembly at 0° to the beam. Light in weight targets (^0.5 g) have absorbed insignificant energy due to the exposure with bremsstrahlung without noticeable heat up of them. A stack of several different targets could be exposed simultaneously because of minor absorption of bremsstrahlung photons in the relatively thin target layers. Such an operation is useful for common calibration of the reaction yields resulted in the reduction of random scattering for measured values of relative yields. In one hour past irradiation, the samples were transported to HPGe detector for 7-ray activity measurements at clean room. The "cooling" for about one hour reduces the background counts due to the decay of short-lived products. For each sample, the spectra were measured at several times during an overall period of hours, days, or even months when long-lived products were looked for. The variations were undertaken in the sample-to-detector distance, cooling/counting times, and the use of 7-absorption filters between the sample and the detector. The aim was to provide optimal conditions for detection of all radioactive nuclides, even those appearing with low activity, when were produced due to thebremsstrahlung-induced reactions. Energy and efficiency calibrations of the detector were performed by spectra from 7-standard sources measured under identical conditions to those of the irradiated samples.

The spectrum of 23-MeV bremsstrahlung covers the giant dipole resonance (GDR) range for mediummass nuclei. As is well known, the (7, n) reaction

is most probable in the energy range of the GDR and collects nearly all the photon absorption yield. The relative yields of other reactions, in ratio to the (Y, n) yield, provide experimental measurements of the probabilities for those individual reactions despite they are normally much less than 1. Likewise, the relative yields determine the probability for emission of protons or alphas [6], or for the population of highspin isomers in the produced nuclei [5]. The isomer-to-ground state ratio is of interest in many cases. The activation technique, after careful yield calibration, provides reliable data for reaction-mechanism studies.

Targets of 109Ag, 113Cd, 114Cd, natCd, natIn, and natSn were irradiated for periods of about 10 h. The gamma-ray spectra of the induced there activities were carefully measured. Figure 1 shows sections of two such spectra for 109Ag and 114Cd targets measured in 14 months past activation. The statistics of counts is enough to deduce the peak areas with moderately good accuracy. The long-lived 108mAg and 113mCd products are observed through the corresponding Y-ray lines. The spectra were processed using the commercial "Genie 2000" code to determine the energy and area of all distinguishable Y-ray peaks. The count rate for a peak attributed to a definite isotope corresponds to the number of nuclei of this species produced during the irradiation. The standard formulations were applied to account for the accumulation- and decay-time factors dependent on the irradiation, cooling, and measuring times. There were accounted: the quantum yield of the definite gamma ray, the detector efficiency, the filter transparency, etc. The spectroscopic data for all nuclides was obtained from compilations in "Nuclear Data Sheets".

The error of the relative yield of any product, compared to the (y, n) yield, was obtained by standard error propagation. The accuracy of the deduced yield is determined as a combination of errors of different origin. The major ones are due to: the statistical error of the measured area for the Y line of interest, the usual inaccuracy in the detector efficiency calibration, and the systematic errors in the tabulated data.

In some cases, the self-absorption of gammas due to the sample thickness could not be neglected and corresponding corrections were inserted, with their own uncertainties. After all, an extremely high level of accuracy could not be reached in all cases. For the relative yield, standard deviations of about 8—25% were typical, as expected for the majority of measurements based on the y-spectroscopic analysis. This was nevertheless sufficient to obtain definite physical results. When the standard deviation exceeded 35%, only upper limit of the yield was obtained.