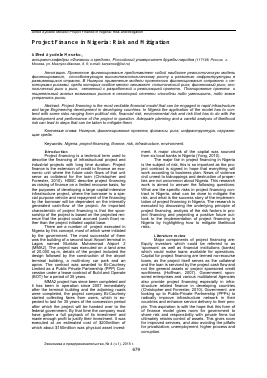 Abstract. Project financing is the most veritable financial model that can be engaged in rapid infrastructure and large Engineering development in developing countries. In Nigeria the application of the model has to contend with some risks ranging form political risk, financial risk, environmental risk and risk that has to do with the development and performance of the project in question. Adequate planning and a careful analysis of likelihood risk can lead to steps that can be taken to mitigate them.

Project financing is a technical term used to describe the financing of infrastructural project and industrial projects with long time duration. Project finance is the extension of credit to finance an economic unit where the future cash flows of that unit serve as collateral for the loan (Christopher and Forrester, 2010). HSBC describe project financing as raising of finance on a limited recourse basis, for the purposes of developing a large capital-intensive infrastructure project, where the borrower is a special purpose vehicle and repayment of the financing by the borrower will be dependent on the internally generated cash-flow of the project. An important characteristic of project financing is that the sponsorship of the project is based on the projected revenue that the project could accrued (cash flow) rather than the project initiated capital base.

There are a number of project executed in Nigeria by this concept, most of which were initiated by the government. The most successful of them was the building of a second local Airport terminal in Lagos named Muritala Muhammad Airport 2 (MMA2). The project was executed on a land area of 20,000 sq.m, details of the project included the design followed by the construction of the airport terminal building, a multi-story car park and an apron. The contract was awarded to Bi-Courtney Limited as a Public Private Partnership (PPP) Concession under a lease contract of Build and Operate (BOT) for a period of 35 years.

MMA2 project has since been completed and it has been in operation since 2007 immediately after the terminal building and the adjoining roads were completed, the project company Bi-Courtney started collecting fares from users, which is expected to last for 35 years of the concession period after which the project will be handed over to the federal government. By that time the company must have gotten a full payback of its investment and made enough profit to justify their investment. It was executed at an estimated cost of $200million of which about $150million was physical asset invest-

ment. A major chunk of the capital was sourced from six local banks in Nigeria (Yong, 2010).

Major components of project financing are: Equity investors which could be referred to as 'sponsors' as well as financial institutions (banks) which could make loans available for operations. Capital for project financing are termed no-recourse loans, as the project itself serves as the collateral and the loan is serviced by the project cash flow and not the general assets or project sponsored credit worthiness (Hoffman, 2007). Government sponsored enterprises and various multilateral Agencies also provide project financing especially in infrastructure related finance in developing countries (Christopher and Forrester, 2010). Government are looking up to Public-Private Partnership (PPPs) to radically improve infrastructure network in their countries and enhance service delivery to their people. This aspiration is with the hope that this form of of finance model gives room for government to share risk and responsibility with private firms but ultimately retains control of assets. This gives room for improved services, and also avoiding the pitfalls for privatization, unemployment, higher process and corruption.

Extractive mining, telecommunication, transportation, entertainment and sports are traditional areas where project financing are mostly used. In Nigeria, it's application has been in the transportation sector, but with the poor maintenance of the federal government football stadia across the country, plans are in top gear to lease the stadia to private bodies as a concession for management and improvement. There are also cases of independent private real estate development in Nigeria major cities that are been implemented on the basis of project finance model.

The most common form of project financing contract is the "Engineering, procurement and Construction (EPC) contract". The contractor is handed over an Engineering design which he is expected to build and deliver at a certain date on a per-determined fixed price. Basic components are: Project description, price, payment, completion date, completion guarantee, Liquidated Damages (LDs), performance guarantee LDS and cap under LDs. Another form of project financing is "Operation and Maintenance Agreement (O&M)". Here a project company allows another company that has expertise in an industry to operate and maintain the project under the O&M agreement contract, alternatively the project company could also operate and maintain the project but with a technical assistance of an experienced company.

Christopher and Forrester (2010) classified risk as either financial or non financial and that the nature of risk depend on the stage of execution of project. In the course of construction, risk can be seen in workers compensation, labour, delays, environmental risk, cost overruns, quality compromise, destruction of properties either by acts of natural occurrence, vandalism or even terrorism. After completion of a project, risk could come in the form of loss of revenue from the business as a result of interruption or discontinuity of business. This is particularly important as repayment of the cost of the business depend on its cash flow .Insecure property rights, political risks, capital control, labour dispute and financial risks like changes in exchange rate, and interest rates are also some other example of risks that could come up after completion of the project.

as a good reason for the recommendation of project financing. Kleimeire and Megginson (2000) asserts that the higher the political risk of the host country, the more likely is project financing. This assertion is in-line with the submission of Qian and Strahan

(2005) that the use of private financing can be used to mitigate risk that is common in countries with poor functioning institutions. Hainz and Kleimeier

(2006) developed a double moral hazard model that predicts that the use of project finance increases with political risk of the country in which the project is located and the influence of the lender over the political risk exposure. The prediction of this model was found to be true, the research also provided evidence that multilateral development banks act as "political umbrella" It thus implies that project financing is a tool for risk mitigation in the financing of projects. The business environment should however be well studied during feasibility studies t