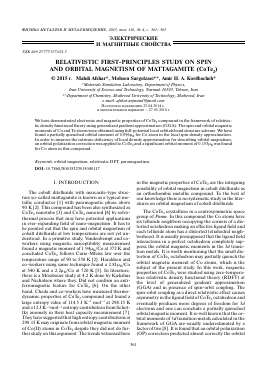 We have demonstrated electronic and magnetic properties of CoTe2 compound in the framework of relativis-tic density functional theory using generalized gradient approximation (GGA). The spin and orbital magnetic moments of Co and Te atoms were obtained using full-potential local orbitals band structure scheme. We have found a partially quenched orbital moment of 0.096цв for Co atom in the local spin density approximation. In order to improve the intrinsic deficiency of local density approximation for describing orbital magnetism, an orbital polarization correction was applied to CoTe2 and a significant orbital moment of 0.153цв was found for Co atom in this compound.

The cobalt ditelluride with marcasite-type structure so-called mattagamite is known as a typical metallic conductor [1] with paramagnetic phase above 90 K [2]. This compound has been also synthesized as CoTe2 nanotube [3] and CoTe2 nanorod [4] by solvo-thermal process that may have potential applications in ever-expanding field of nano-magnetism. It has to be pointed out that the spin and orbital magnetism of cobalt ditelluride at low temperatures are not yet understood. In a primitive study, Vandenbempt and co-workers using magnetic susceptibility measurement found a magnetic moment of 1.94 ^B/Co at 372 K and concluded CoTe2 follows Curie-Mfeiss law over the temperature range of 90 to 550 K [2]. Haraldsen and co-workers using same technique found a 2.81 ^B/Co at 540 K and a 2.2^B/Co at 720 K [5]. In literature, there is a Mossbauer study at 4.2 K done by Kjekshus and Nicholson where they. Did not confirm an anti-ferromagnetic feature for CoTe2 [6]. On the other hand, Cheda and co-workers have measured thermo-dynamic properties of CoTe2 compound and found a large entropy value of 114.5 J K-1 mol-1 at 298.15 K and a 12 J K-1 mol-1 entropy contribution from Schot-tky anomaly in their heat capacity measurement [7]. They have suggested that high entropy contributions at 298.15 K may originate from orbital magnetic moment of Co(II) atoms in CoTe2 despite they did not do further study on this argument. The trends witnessed here

The CoTe2 crystallizes in a centrosymmetric space group of Pnnm. In this compound the Co atoms have six telluride neighbors occupying the corners of a distorted octahedron making an effective ligand field and each telluride atom has a distorted tetrahedral neighborhood. It is usually presupposed that the ligand field interactions in a perfect octahedron completely suppress the orbital magnetic moments in the 3d transition metals. It is worth mentioning that the small distortion of CoTe6 octahedron may partially quench the orbital magnetic moment of Co atoms, which is the subject of the present study. In this work, magnetic properties of CoTe2 were studied using zere-tempera-ture relativistic density functional theory (RDFT) at the level of generalized gradient approximation (GGA) and in presence of spin-orbit coupling. The spin-orbit coupling as a direct relativistic effect causes asymmetry in the ligand field of CoTe6 octahedron and eventually produces more degrees of freedom for 3d electrons and one can conclude a partially quenched orbital magnetic moment. It is-well known that the orbital moments of 3d transition metals calculated in the framework of GGA are-usually underestimated by a factor of two [8]. It is found that an orbital polarization (OP) correction predicted almost correctly the orbital

Fig. 1. (Color online) Crystal structure of CoTe2. The CoTe6 octahedron is rotated around the è-axis. The green and red balls indicate the Co and Te atoms, respectively.

moments of 3d transition ions. In section II we present this OP correction into the GGA. Here, systematic studies were done on magnetic properties of individual atoms in CoTe2 with marcasite-type structure using full potential local orbital (FPLO) method. The outline of this paper is as follows, the computational methods are described in Sec. II. Section III contains results and discussions on ligand field model and orbital magnetism in CoTe2. Finally the paper is summarized in Sec. IV.

To determine the magnetic properties of CoTe2, the RDFT calculations were carried out on the basis of relativistic version of the FPLO packages [9]. We have used the non-relativistic generalized gradient approximation (GGA) with the Perdew—Burke—Ernzerhof 96 version [10] for the exchange-correlation potential that has been implemented in the FPLO package. In the FPLO scheme the four component Kohn-Sham-Dirac (KSD) equation in the framework of RDFT is solved self-consistently up to all orders [l1]. The site-centred potentials and densities were expanded in spherical harmonic contributions up to lmax = 12. The exact form of spin-orbit (SO) coupling that is implicitly contained in the kinetic term of KSD equation, was taken into account in our full relativistic (FR) calculations. In the scalar relativistic (SR) version of FPLO approach, the mass-velocity and Darwin terms have been included in KSD equation while the SO coupling has been omitted in the SR approach. The

following basis set was adopted as the valence states including (3s, 3p, 3d, 4s, 4p, 4d, 5s), and (4s, 4p, 4d, 5s, 5p, 5d, 6s, 6p) for the cobalt, and telluride atoms, respectively. The inclusion of Co-(3s3p) states and also Te-(4s4p4d) semicore states was necessary to account for the non-negligible core-core overlap. For the sake of completeness we also adopted the polarization states of (5s4d) for Co and (5d6s6p) states for Te individual atoms.

It has been found that in full relativistic scheme the calculated spin magnetic moment of hcp-Co (1.60^B/Co) [8] is slightly larger than experiment (1.52^B/Co) [l2]. On the other hand, within the same method the calculated orbital moment of hcp-Co (0.08^B/Co) [8] is significantly smaller than experiment (0.08^B/Co) [12]. For a better description of orbital magnetism at the 3d sub-shell of Co atom an empirical OP correction to GGA functional has been suggested by Brooks [13] and in a later contribution by Eriksson and co-workers [l4]. This empirical OP correction for an unfilled 3d shell as far as possible has been derived from KSD theory by Eschrig and coworkers [15, 16]. This correction with the form of

correlation energy functional. The Mfa is the orbital moment of the 3d spin subshells in Co atom. The at denotes the majority (minority) spin direction. The Bfa is the Racah parameter for Co atom in CoTe2: [13]. The final values of spin and orbital moments are obtained from corresponding projections on the atomic basis states [l1]. The convergence of the total energies was checked up to 10-6 Hartree with respect to the £-space. The full Brillouin zone was sampled with regular mesh containing 20 x 20 x 20 ^-points.

The 3d electrons of cobalt and 5p electrons of telluride ions determine the magnetic behavior of CoTe2. In a fully-ionic picture the Co2+ ions are in a 3d7 configuration while Te- ions have a 5p5 configuration. Therefore, based on Hund's rules, the quantum numbers of Co2+ would be S = 3/2 and L = 3, while the quantum numbers of Te- are S = l and L = l. These quantum numbers for CoTe2 yield a total magnetic moment of 4.12|B on Co site and 2.24|B on Te sites with Lande g-factors of 1.33 and 1.5 for Co and Te atoms, respectively. This picture is completely changed by the ligand field interactions made by regular octahedron of Te- ions in CoTe2.

It is well-known fact that in a regular octahedron, the 3d orbitals of Co atoms are divided by symmetry into axial doublet eg states (d 2 2, and d 22 ) of