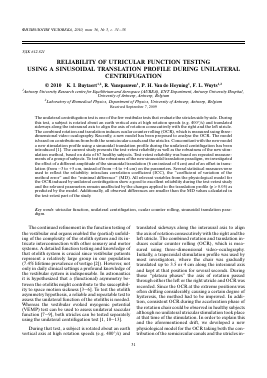 The unilateral centrifugation test is one of the few vestibular tests that evaluate the utricles side by side. During this test, a subject is rotated about an earth vertical axis at high rotation speeds (e.g. 400°/s) and translated sideways along the interaural axis to align the axis of rotation consecutively with the right and the left utricle. The combined rotation and translation induces ocular counter rolling (OCR), which is measured using three-dimensional video-oculography. Recently, a new model has been proposed to analyse the OCR. The model is based on contributions from both the semicircular canals and the utricles. Concomitant with the new model a new stimulation profile using a sinusoidal translation profile during the unilateral centrifugation has been introduced [1]. The current study presents the test-retest reliability as well as the robustness of the new stimulation method, based on data of 67 healthy subjects. Test-retest reliability was based on repeated measurements of a group of subjects. To test the robustness of the new sinusoidal translation paradigm, we investigated the effect of a different amplitude of the sinusoidal translation (6 cm instead of 4 cm) and of an offset in translation (from —3 to +5 cm, instead of from —4 to +4 cm) on the parameters. Several statistical measures were used to reflect the reliability: intraclass correlation coefficient (ICC), the "coefficient of variation of the method error" and the "minimal difference" (MD). All relevant variables from the physiological model for the OCR induced by unilateral centrifugation show a good to excellent reliability during the test-retest study and the relevant parameters remain unaffected by the changes applied to the translation profile (p > 0.05) as predicted by the model. Additionally, all observed differences are smaller than the MD values calculated in the test-retest part of the study.

The continued refinement in the function testing of the vestibular end organs enabled the (partial) unfolding of the complexity of the otolith system and its intricate interconnection with other sensory and motor systems. A detailed function testing and knowledge of that otolith system is crucial since vestibular patients represent a relatively large group in our population (7.4% lifetime prevalence ofvertigo [2]). However, not only in daily clinical settings a profound knowledge of the vestibular system is indispensable. In astronautics it is hypothesized that a (functional) asymmetry between the otoliths might contribute to the susceptibility to space motion sickness [3—6]. To test the otolith asymmetry hypothesis, a reliable and repeatable test to assess the unilateral function of the otoliths is needed. Whereas the vestibular evoked myogenic potential (VEMP) test can be used to assess unilateral saccular function [7—9], both utricles can be tested separately using the unilateral centrifugation test [1, 10—13].

During that test, a subject is rotated about an earth vertical axis at high rotation speeds (e.g. 400°/s) and

translated sideways along the interaural axis to align the axis of rotation consecutively with the right and the left utricle. The combined rotation and translation induces ocular counter rolling (OCR), which is measured using three-dimensional video-oculography. Initially, a trapezoidal stimulation profile was used by most investigators, where the chair was gradually translated up to 3.5 or 4 cm along the interaural axis and kept at that position for several seconds. During those "plateau phases" the axis of rotation passed through either the left or the right utricle and OCR was recorded. Since the OCR at the extreme positions was often drifting considerably, causing a certain degree of hysteresis, the method had to be improved. In addition, consistent OCR during the acceleration phase of the rotation chair could be observed in healthy subjects although no unilateral utricular stimulation took place at that time of the stimulation. In order to explain this and the aforementioned drift, we developed a new physiological model for the OCR taking both the contribution of the semicircular canals and the utricles in-

to account. Concomitantly, we adopted a different stimulation pattern, being a simple sinusoidal translation profile (frequency = 0.013 Hz, amplitude = 4 cm) instead of the trapezoidal profile in previous studies [11—13]. The semicircular canal contribution to the OCR is modelled by a second-order transfer function characterised by a canal gain, a cupular and adaptation time constant and a velocity storage component. The contribution of both utricles was modelled separately by two sine functions, yielding characteristic parameters such as gain, bias, phase lag and the asymmetry between the left and the right utricle. This model is described in detailed in [1] and parts of it in [14].

This study reports on the reliability of the new model-based approach. First, the test-retest reliability was assessed by testing a group of subjects on two different days. Next, the robustness of the new sinusoidal translation paradigm was studied. Hereto, we investigated the effects of an altered amplitude of the sinusoidal translation (6 cm instead of 4 cm) and since the model incorporates the amplitude of the interaural excursion, it was expected that the relevant parameters remain unaffected by the change from 4 to 6 cm. Thirdly, to mimic a misalignment of the subject during the test, an offset in translation (from —3 to +5 cm, instead of from —4 to +4 cm) was applied and its effect on the parameters was investigated.

Unilateral centrifugation test. During the unilateral centrifugation test, the subject was seated in an earth-vertical axis rotating chair (Neurokinetics Inc, Pittsburgh, USA) and securely fastened with a five-point belt. The head was stabilised with a head-rest and three flexible arms (Mitutoyo, USA) that could be fixated against the forehead. Three-dimensional video-ocu-lography was used to record the eye movements. The video goggles allowed the detection of horizontal, vertical and torsional coordinates in real time at a rate of 25 Hz. Horizontal and vertical coordinates of both eyes were measured tracking a circle fitted to the pupil. The amount of the OCR was calculated by means of cross correlation of the grey level information contained in a specific segment in the iris. A more detailed description of the video goggles and the OCR detection can be found in [15] and [16]. All measurements were performed in total darkness except from a chair-fixed faint fixation LED presented at a distance of 1 m. To calibrate the video system, five fixation points were presented under predetermined, fixed angles (0 degrees, 10 degrees left, right, up and down) prior to the rotation. A 30 s baseline was recorded as a reference. At the beginning of the trial, the axis of rotation was aligned with the centre of the head (the midpoint of the line joining the two labyrinths) and the chair was accelerated with 3°/s2 to a constant velocity of 400°/s. Then, after a period of 90 s at this velocity, the chair was translated sinusoidally along the interaural axis at

a frequency of 0.013 Hz. Maximum displacement was 4 cm to either side. The amplitude of the sine is based on MRI-studies that have shown that the mean (±standard error) interutricular distance is 7.45 (±0.08) cm for males and 6.99 (±0.06) cm for females [17]. Since the utricles are placed symmetrically around the head centre, the axis of rotation will cross each utricle several times during the sinusoidal translation profile yielding a unilateral stimulation.

Measured at the centre of the head, the combined rotation and translation induced a maximum interau-ral acceleration ac (ac = ®2r with ® the angular velocity of the chair and r the distance to the axis of rotation) of 1.95 m/s2 (= 0.2 g with g the gravitational acceleration which equals 9.81 m/s2), which is equivalent to a tilt of the gravito-inertial acceleration (GIA) of11.24° (= arctan [0.2]). An inclinometer (Watson Ind Ltd, Gravitational inclinometer ADS-100A, UK) placed at the centre of the chair was used to indicate the tilt of the GIA at the head centre. After 4 cycli (equivalent to 307.7 s) the axis of rotation was aligned with the centre of the head again and the chair was gently decelerated (—2.5°/s2). In the rest of this paper, this paradigm will be referred to as the "reference" paradigm. The protocol is depicted in Fig. 1 (A—C), together with an example of the OCR response (Fig. 1, D).

Theoretical model. The OCR of each eye was fitted to a mathematical model to determine characteristics of both utricles and the semicircular canals. The model, which is described in detail in [1] and parts of it in [14] is based on a physiological model of OCR generated by the utricles and the semicircular canals. It describes the OCR response (V) as follows:

Where VSCC represents the semicircular canal contribution induced by the yaw angular acceleration and V U represents the utricular contribution induced by the centripetal acceleration (translation of the chair during rotation). The first part is described by a second-order transfer function [1], in analogy with the approach to model the horizontal vestibulo-ocular reflex (VOR) [18-22]: