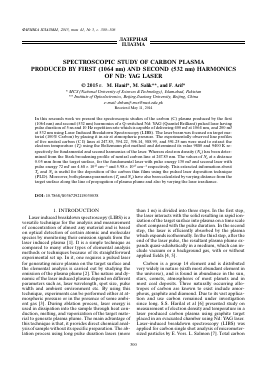 In this research work we present the spectroscopic studies of the carbon (C) plasma produced by the first (1064 nm) and second (532 nm) harmonics of a Q-switched Nd: YAG (Quantel Brilliant) pulsed laser having pulse duration of 5 ns and 10 Hz repetition rate which is capable of delivering 400 mJ at 1064 nm, and 200 mJ at 532 nm using Laser Induced Breakdown Spectroscopy (LIBS). The laser beam was focused on target material (100% Carbon) by placing it in air at atmospheric pressure. The experimentally observed line profiles of five neutral carbon (C I) lines at 247.85, 394.22, 396.14, 588.95, and 591.25 nm were used to extract the electron temperature (Te) using the Boltzmann plot method and determined its value 9880 and 9400 K respectively for fundamental and second harmonics of the laser. Whereas electron density (Ne) has been determined from the Stark broadening profile of neutral carbon line at 247.85 nm. The values of Ne at a distance 0.05 mm from the target surface, for the fundamental laser with pulse energy 130 mJ and second laser with pulse energy 72 mJ are 4.68 x 1017 cm-3 and 5.98 x 1017 cm-3 respectively. This extracted information about Te and Ne is useful for the deposition of the carbon thin films using the pulsed laser deposition technique (PLD). Moreover, both plasma parameters (Te and Ne) have also been calculated by varying distance from the target surface along the line of propagation of plasma plume and also by varying the laser irradiance.

of concentration of almost any material and is based

on optical detection of certain atomic and molecular

species by monitoring their emission signals from the laser induced plasma [1]. It is a simple technique as

compared to many other types of elemental analysis

methods or techniques because of its straightforward

experimental set up. In it, one requires a pulsed laser

for generating micro plasma on the target surface and

the elemental analysis is carried out by studying the

emission of the plasma plume [2]. The nature and dy-

namic of the laser induced plasma depend on different parameters such as, laser wavelength, spot size, pulse width and ambient environment etc. By using this

technique, experiments can be performed either at at-

mospheric pressure or in the presence of some ambi-

ent gas [3]. During ablation process, laser energy is used in dissipation into the sample through heat con-

duction, melting, and vaporization of the target mate-

rial to generate plasma plume. The main advantage of this technique is that, it provides direct chemical analysis of sample without its specific preparation. The ablation process using long pulse duration lasers (more

than 1 ns) is divided into three steps. In the first step, the laser interacts with the solid resulting in rapid ion-ization of the target surface into plasma on a time scale short compared with the pulse duration. In the second step, the laser is efficiently absorbed by the plasma which expands isothermally. In the third step, after the end of the laser pulse, the resultant plasma plume expands quasi-adiabatically in a medium, which can include vacuum or a background gas, with or without applied fields [4, 5].

Carbon is a group 14 element and is distributed very widely in nature (sixth most abundant element in the universe), and is found in abundance in the sun, stars, comets, atmospheres of most planets and in most coal deposits. Three naturally occurring allo-tropes of carbon are known to exist include amorphous, graphite and diamond. Due to its vast application and use carbon remained under investigation since long. S.S. Harilal et al [6] presented study on measurement of electron density and temperature in a laser produced carbon plasma using graphite target placed in an evacuated chamber using Nd: YAG laser. Laser-induced breakdown spectroscopy (LIBS) was applied for carbon single shot analysis of micrometer-sized particles by E. Vors. L. Salmon [7]. Total carbon

measurement in whole tropical soil sample was presented by Robson M. da Silva et al [8]. T. Ctvrtnickova et al [9] applied the LIBS technique for the analysis of fly ash and bottom ash resulting from the coal combustion in a coal fired power plant. In the present work, we report the emission studies of the plasma generated at the surface of carbon using Nd: YAG laser. We have studied the transitions at 247.85, 394.22, 396.14, 588.95, and 591.25 nm of neutral carbon to study the spatial behaviour by determining values of plasma parameters. Moreover, their behaviour along with variation in distance as well as with laser irradi-ances has also been studied.

In this experiment the material studied is carbon (C) containing mass percentage of 100% in the sample. Its small quantity was used to prepare a pellet of 15 mm diameter and 3 mm thickness with the help of

hydraulic press machine using a load of 10-ton, for a time duration of 5 minutes. On Fig. 1 the results of research of morphology and quantitative element composition of the Carbon sample by means of electron microscope (SEM) are presented. The electron microscope (SEM) photograph of the sample is shown in Fig. 1a. The quantitative analysis of the sample conducted by JSM - 6490A analytical SEM is shown in Fig. 1b.

The experimental setup is shown in Fig. 2 and is same as that described in our previous work [10-13]. Briefly we used a Q-switched Nd: YAG (Quantel Brilliant) pulsed laser having pulse duration of 5 ns and 10 Hz repetition rate which is capable of delivering 400 mJ at 1064 nm, and 200 mJ at 532 nm. The laser pulse energy was varied by the flash lamp Q-switch delay through the laser controller, and the pulse energy was measured by a Joule meter (Nova - Quantel 01507). The laser beam was focused on the target using convex lens of 20 cm focal length. The sample was mounted on a three dimensional sample stage, which was rotated to avoid the non-uniform pitting of the target. The distance between the focusing lens and the sample was kept at 18.5 cm, less than the focal length of the lens to prevent optical breakdown in air induced by focused laser radiation of the ambient air in front of the target. The spectra were recorded using an average of ten laser shots keeping the other experimental conditions intact. The radiation emitted by the plasma were collected by a fiber optics (high-OH, core diameter: 600 ^m) having a collimating lens (0-45° field of view) placed at right angle to the direction of the laser beam. The optical fiber was connected with the LIBS-2000 detection system (Ocean Optics Inc.), to measure the plasma emission. The LIBS-2000 detection

Table 1. Spectroscopic parameters of the neutral carbon lines used for the determination of Te and Ne

system consists of five spectrometers each having the entrance slit width of 0.5 micron, equipped with 2400 lines/mm and 1800 lines/mm holographic gratings and 2048 CCD detectors. This system is capable

of registering the optical spectrum covering the region from 200 nm to 720 nm. The spectral resolution of the spectrometers has been determined as 0.06 nm by scanning a beam of a narrow band width dye laser. It is the characteristic of these spectrometers which depends upon the choice of the number of lines on the grating, the CCD detector elements and the slit widths of the spectrometer. The recorded spectra were corrected by subtracting the background dark signal. The pulse width of our laser system is about 5 ns and the detectors opening was synchronized at about 100 ns whereas the integration time was about 3 ms. In order to record the emission spectrum, the LIBS — 2000 detection system was synchronized with the Q-switch of the Nd: YAG laser. The flash lamp out of the laser triggered detection system through a four-channel digital delay/Pulse generator (SRS DG 535). The data acquired simultaneously by all the five spectrometers were stored on a PC through the OOILIBS software for subsequent analysis.

In the first set of the experiment, we have recorded the carbon plasma emission produced by the first two harmonics of the Nd: YAG laser. The laser was focused on the target material by a quartz lens with a focal length of 20 cm. Carbon plasma was recorded at different positions along the direction of propagation of the plasma.

The emission spectra of carbon in two windows covering the spectral region from 225 to 400 nm and from 520 to 600 nm produced by the first harmonic of the laser are shown in Fig. 3. Fig. 3 a shows the window of emission spectrum of carbon co