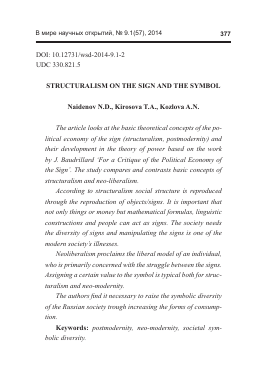 According to structuralism social structure is reproduced through the reproduction of objects/signs. It is important that not only things or money but mathematical formulas, linguistic constructions and people can act as signs. The society needs the diversity of signs and manipulating the signs is one of the modern society's illnesses.

Neoliberalism proclaims the liberal model of an individual, who is primarily concerned with the struggle between the signs. Assigning a certain value to the symbol is typical both for structuralism and neo-modernity.

The authors find it necessary to raise the symbolic diversity of the Russian society trough increasing the forms of consumption.

Postmodernity is one of the main recent tendencies in science and culture, which affected economics, sociology, psychology, politics, morals, culture and art. Critical attitude to traditions, reflexive attitude to stereotypes and values and questioning their efficiency are the characteristics of postmodernity. The main criterion of estimating the work method is its present efficiency. The efficiency in its turn is diagnosed by the number of positive references by colleagues.

Among the characteristics of postmodernity are:

- ambiguity (a range of options, polysemanticism);

- no rules for subordination of the processes;

- the doer performing the action is impersonal and decentralized;

Jean Baudrillard and his book 'For a Critique of the Political Economy of the Sign' which was published in 1972 and translated into Russian in 2007 [1] became a typical representative of postmodernity in the latter half of the 20th century (he adapted the existing theoretical concepts of modernity to present-day reality). Structuralism is a synonym of postmodernity. Postmodernity views existing social relations and phenomena as signs. Initially the reality governed the people with the help of the signs, so the reality and the signs corresponded to each other. Nowadays, we are governed by simulation principles instead of former principles on which the reality was based. Signs correspond to other signs, but not things. Everything becomes a simulation, even the labour, which does not manufacture, but only socializes the individual and transforms the individual into a sign. In the simulation the individual including the authorities representative, deals with abstract things, formulas and simulacrums, but not real people, structures or relations.

Researchers refer to J. Baudrillard's ideas both critically and positively, because he proved the role of symbolic diversity in the societal development. Some authors view neo-liberalism the same positively as a concept of a liberal individual. (the individual who thinks that god lives in everyone's soul).

The book 'For a Critique of the Political Economy of the Sign' holds a special place among the writings of J. Baudrillard's (born in 1929), sociologist. In his book J. Baudrillard presented economic explanation of the sign as a fragment of economic reality, an economic category and a reflection of the societal hierarchic structure. J. Baudrillard looks at things and exchange values from the point of view of a consumer and their labour equivalent and from the perspective of social infrastructure signs, which possess imperative force. Societal structure is reproduced through the reproduction of things/signs. Not only things or money can act as signs, but mathematical formulas, linguistic constructions and people.

Exchange is the initial theoretical category in the political economy of the sign. Normally, exchange means commodity counter-flow. The same is true for other definitions of exchange like the match between demand and supply, continuing distribution, the match between the consumer's and the supplier's plans, the point where the curves of the consumer's indifference and the manufacturer's production capability meet, reciprocity and centralization. J. Baudrillard derives from a different definition of exchange as an operation between two separate terms, which existed in isolation before the exchange, and as a double coercion - the coercion to give and the coercion to take [see 1 p.79]. Such definition does not conform to the classical concept of exchange as the consumer's free choice. It is closer to the classification of exchange forms by Polanyi: gift, distribution, commodity exchange. However, J. Baudrillard does not differentiate between a gift, distribution and commodity exchange. He highlights the exchange's functional aspect - whether the exchange takes place for the benefit of

the use-value or for maintaining the parties' social status. He proves that the main goal of the exchange is maintaining the parties' the social status. Accoridng to J. Baudrillard there is always an underlying social mechanism of demonstration, differentiation and veneration behind the purchase when items are saved or consumed. The main reason for purchasing is not in satisfying the needs, enjoying the advantages or user value, but in the symbolic value of the exchange, social demon-station, competition and finally in class differences. [see 1, p. 14].

The exchange is regulated by the rules of equivalency, differentiation and ambivalency. Equivalency presupposes that objects can be replaced according to their exchange value. Differentiation - the exchange can demonstrate the parties' social status. Ambivalency -the individual's acceptance/rejection of the other party's passion and desire for the object, the discourse between the consciousness and the subconscious.

Exchange predetermines the existence of the first phenomenon for the sake of the other. Exchange of things/signs both differentiates people by their social status and the object of exchange by characteristic elements. Within the exchange system there exists social production of material differences, codes of values and status values, therefore, how functional goods and individual's needs are is predetermined by these fundamental structural mechanisms and differentiation principles. [see 5, p. 87]. Consumption does not exist separately from use-value as the satisfaction of needs and desires. However, there exists manufacture of things/signs, which determines satisfaction of desires. Neither does superstructure over material production exist. Ideology and moral values are the basic elements of the society as they reproduce and maintain objects/signs. According to J. Baudrillard user values do not reveal themselves under modern market economy conditions, it is only the logic of the sign t