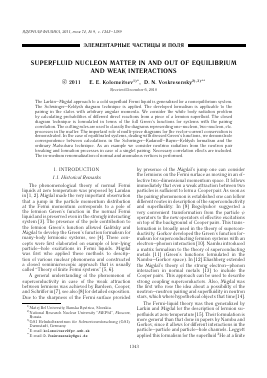 SUPERFLUID NUCLEON MATTER IN AND OUT OF EQUILIBRIUM

The Larkin—Migdal approach to a cold superfluid Fermi liquid is generalized for a nonequilibrium system. The Schwinger—Keldysh diagram technique is applied. The developed formalism is applicable to the pairing in the states with arbitrary angular momenta. We consider the white body radiation problem by calculating probabilities of different direct reactions from a piece of a fermion superfluid. The closed diagram technique is formulated in terms of the full Green's functions for systems with the pairing correlation. The cutting rules are used to classify the diagrams representing one-nucleon, two-nucleon, etc. processes in the matter. The important role of multi-piece diagrams for the vector-current conservation is demonstrated. In the case of equilibrated systems, dealing with dressed Green's functions, we demonstrate correspondence between calculations in the Schwinger— Kadanoff—Baym—Keldysh formalism and the ordinary Matsubara technique. As an example we consider neutrino radiation from the neutron pair breaking and formation processes in case of a singlet pairing. Necessary correlation effects are included. The in-medium renormalization of normal and anomalous vertices is performed.

The phenomenological theory of normal Fermi liquids at zero temperature was proposed by Landau in [1, 2]. Migdal made the very important observation that a jump in the particle momentum distribution at the Fermi momentum corresponds to a pole of the fermion Green's function in the normal Fermi liquid and is preserved even in the strongly interacting system [3]. The presence of the pole contribution to the fermion Green's function allowed Galitsky and Migdal to develop the Green's function formalism for many-body fermionic systems, see [4]. These concepts were first elaborated on example of low-lying particle—hole excitations in Fermi liquids. Migdal was first who applied these methods to description of various nuclear phenomena and constructed a closed semimicroscopic approach that is usually called "Theory of finite Fermi systems" [5, 6].

A general understanding of the phenomenon of superconductivity in case of the weak attraction between fermions was achieved by Bardeen, Cooper, and Schriffer in [7], see also [8] for detailed exposition. Due to the sharpness of the Fermi surface provided

by presence of the Migdal's jump one can consider the fermions on the Fermi surface as moving in an effective two-dimensional momentum space. It follows immediately that even a weak attraction between two particles is sufficient to form a Cooper pair. As soon as the pairing phenomenon is established one can follow different routes in description of the superconductivity and superfluidity: In [9] Bogolyubov suggested a very convenient transformation from the particle ^ operators to the new operators of effective excitations on top of the background of Cooper pairs. This transformation is broadly used in the theory of superconductivity. Gorkov developed the Green's function formalism for superconducting fermion systems with an electron—phonon interaction [10]. Nambu introduced a matrix formalism to the theory of superconducting metals [11] (Green's functions formulated in the Nambu—Gorkov space). In [12] Eliashberg extended the Migdal's theory of the strong electron—phonon interaction in normal metals [13] to include the Cooper pairs. This approach can be used to describe strong coupling superconductors. Also, Migdal was the first who rose the idea about a possibility of the neutron—neutron pairing and superfluidity in neutron stars, which where hypothetical objects that time [14].

The Fermi-liquid theory was then generalized by Larkin and Migdal for the description of fermion su-perfluids at zero temperature [ 15]. Their formulation is more general than that done in papers by Nambu and Gorkov, since it allows for different interactions in the particle—particle and particle—hole channels. Leggett applied this formalism for the superfluid 3He at a finite

temperature [16, 17]. Schwinger in [18], Kadanoff and Baym in [19], and Keldysh in [20] developed the nonequilibrium diagram technique for the description of nonequilibrium Fermi and Bose systems. Even for equilibrium systems at T = 0 Schwinger—Kadanoff— Baym—Keldysh approach is in many cases more convenient than the standard Matsubara technique (applicable only for equilibrium systems) since it does not involve the Wick rotation and the obtained results can be continuously transformed to those computed in the standard Feynman-diagram technique at zero temperature.

The importance of coherence time effects on the production and absorption of field quanta from the motion of source particles in matter has been first discussed by Landau and Pomeranchuk [21]. In [22] Migdal developed the complete theoretical framework for the description of the bremsstrahlung radiation of ultrarelativistic electrons in the process of multiple rescatterings on Coulomb centers. Successful measurements of such a suppression of the bremsstrahlung radiation have been recently carried out at the Stanford Linear Accelerator Center [23], see also the review in [24]. Now this effect is named the Landau—Pomeranchuk—Migdal effect.

In the framework of his theory of finite Fermi systems Migdal developed the description of the soft pion degree of freedom in nuclear matter in application to atomic nuclei and neutron stars. In vacuum, pions are the lightest quanta of the strong interactions between baryons. In medium, pionic modes are softened even further due to the coupling to nucleon particle—hole modes and can be easily excited even at low excitation energies, similar to phonons in solids. As an intriguing consequence of the pion softening Migdal suggested a possibility of the pion condensation4) at the increase of the baryon density, see [26—28]. Latter on, in analogy to the pion condensation, the ideas of the kaon condensation [29] and the charged p-meson condensation [30, 31] in the interiors of neutron stars were explored. Softening of the pionic mode at finite temperature [32—34] and at nonequilibrium [35—37] may manifest in neutron stars [38] and heavy-ion collisions [36, 39].

4)Independently pion condensation was also suggested by Scalapino and Sawyer [25].

Below we consider the white-body radiation from a piece of a superfluid fermion matter. To be specific we focus on the neutrino radiation from a piece of super-fluid nucleon matter. Standard Feynman technique of summation of squared matrix elements of reactions fails to calculate reaction rates in the medium, since in general case there are no asymptotic states for source particles in matter. Indeed, source particles continue to collide before and after radiation of a quantum. This gives rise to finite imaginary parts of the self-energy functions (particle widths). If one naively replaced the summation of all perturbative Feynman diagrams (with free Green's functions) by the summation of corresponding diagrams with dressed Green's functions, it would lead to a double counting due to multiple repetitions of some processes (for an extensive discussion of how one can treat this defect see [35, 46—48]). This calls for a formalism dealing with closed diagrams (integrated over all possible in-medium particle states) with full nonequilibrium Green's functions. Such a general formalism was developed in [47]. It treats on equal footing one-fermion and multifermion processes as well as resonance reaction contributions of the boson origin, such as processes with participation of zero sounds and reactions on the boson condensates. Decomposition of diagrams is done in terms of the full G + Green's functions (Wigner densities). Each diagram in the series with full Green's functions is free from the infrared divergencies. In such a way one generalizes Landau—Pomeranchuk—Migdal treatment of the multiple scattering on external centers to the treatment of the multiple scattering in matter. Both, the correct quasiparticle and quasi-classical limits are recovered.

The formulation of the radiation problem in terms of closed diagrams calculated within the nonequilib-rium Green's function in quasiparticle approximation was performed in [35]. This approach was called the "optical theorem formalism". In [35, 46] it was demonstrated that the standard calculations of reaction rates via integration of squared reaction matrix elements and the results of the optical theorem formalism match exactly, provided conditions for the quasiparticle approximation for fermions are fulfilled. Formally the matching is done by cutting the closed diagrams. In general case considered in [47] going beyond the quasiparticle approximation, the series of closed diagrams is constructed with respect to the number of the G + Green's functions. For low temperatures each G-+ line brings extra (T/eF)2 factor in the production rate of the radiating quanta, eF is the Fermi energy. In [47] the relations between reaction rates at finite widths and the quasiparticle rates were found.

All real calculations of fermion superfluids were perfo