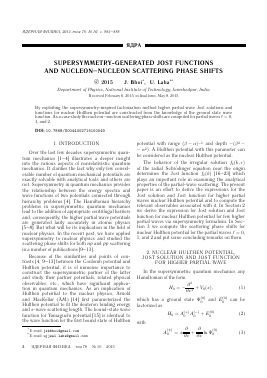 By exploiting the supersymmetry-inspired factorization method higher partial wave Jost solutions and functions for nuclear Hulthen potential are constructed from the knowledge of the ground state wave function. As a case study the nucleon—nucleon scattering phase shifts are computed for partial waves i = 0, 1, and 2.

Because of the similarities and points of contrasts [4, 9—13] between the Coulomb potential and Hulthen potential, it is of immense importance to construct the supersymmetric partner of the latter and study their partner potentials, related physical observables, etc., which have significant application in quantum mechanics. As an implication of Hulthen potential to the nuclear physics, Arnold and MacKellar (AM) [14] first parameterized the Hulthen potential to fit the deuteron binding energy and s-wave scattering length. The bound-state wave function for Yamaguchi potential [15] is identical to the wave function for the first bound state of Hulthen

The behavior of the irregular solution f¿(k, r) of the radial Schrodinger equation near the origin determines the Jost function f¿(k) [16—23] which plays an important role in examining the analytical properties of the partial-wave scattering. The present paper is an effort to derive the expressions for the Jost solution and Jost function for higher partial waves nuclear Hulthen potential and to compute the relevant observables associated with it. In Section 2 we derive the expression for Jost solution and Jost function for nuclear Hulthen potential for few higher partial waves via supersymmetry formalism. In Section 3 we compute the scattering phase shifts for nuclear Hulthen potential for the partial waves Í = 0, 1, and 2 and put some concluding remarks on them.

In the supersymmetric quantum mechanics any Hamiltonian of the form

which has a ground state and E000 can be factorized as

The two quantities in Eq. (11) are complex conjugate of one another. Therefore the Jost solution f0(k,r) and Jost functionf0(k) are given by [17]

In view of Eqs. (5) and (6), the wave function in Eq. (6a) leads to the supersymmetric partner potential

The regular solution 0o(k, r), for nuclear Hulthen potential to the continuous eigenvalue spectrum E = = k2 > 0 is given by [24]

Using the methodology of supersymmetric quantum mechanics we have found that the regular solution of the partner potential in Eq. (6b) is in the form

In order to arrive at the result in Eq. (15) we have made use of the method of [26] to generate the ladder operator relations for Gaussian hypergeometric function. Using the recurrence relation (10) and

From Eq. (17) the p-wave Jost solution and Jost function for the Hulthen potential are identified as

For d-wave potential the regular solution, Jost solution, and Jost function for Hulthen potential are as below

Fig. 1. 3si nuclear Hulthen phase shifts as a function of

also comparable with that of standard result [27] up to energy 75 MeV.

For 3p0 states numerical values of the scattering phase shifts with AM parameters [14] as in Fig. 2 differ significantly from those of Arndt et al. [27]. The phase shifts with these parameters attains the maximum values of 2.68° at FLab = 68 MeV and changes its sign at the laboratory energy 275 MeV, whereas the same for Arndt et al. [27] becomes maximum of 12.66° at FLab = 75 MeV and changes the sign at

phase shifts as a function of ELab.

the energy around 225 MeV. For LB parameters, the scattering phase shift attains the maximum values of 3.902 77° at the laboratory energy 56 MeV and change its sign at 237 MeV. The result of 3di state in Fig. 3 for AM parameters [14] is systematically lower than that of Arndt et al. [27], however the same with LB parameter possess some improved result and is quite comparable with standard result [27].

The nuclear potentials are highly state dependent [28—30] and are parameterized by the strength and range parameters. The higher partial waves, as generated via supersymmetric quantum mechanics from their ground state, are obtained only by the addition of centrifugal barrier. Therefore, it is unexpected that the higher partial wave potential generated from their ground state can produce correct numerical values for phase shifts. However, they are able to produce the correct nature of the scattering phase shifts for different states. It is noticed that our parameters (LB) are superior to the AM parameters [14] as is clearly visible in the results for p- and d-wave scattering phase shifts.