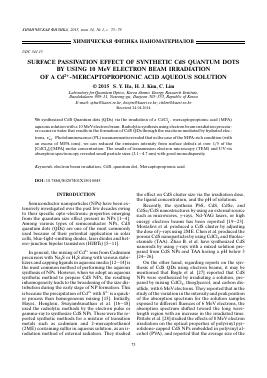 aqueous solution with a 10 MeV electron beam. Radiolytic synthesis using electron beam irradiation processes occurs in water that results in the formation of CdS QDs through the reactions mediated by hydrated electrons, eoq. Photoluminescence (PL) measurements revealed that in the case of the MPA-rich condition (with

an excess of MPA ions), we can reduced the emission intensity from surface defects at over 1/5 of the [CdCl2]/[MPA] molar concentration. The results of transmission electron microscopy (TEM) and UV-vis absorption spectroscopy revealed small particle sizes (2.1—4.7 nm) with good monodispersity.

Semiconductor nanoparticles (NPs) have been extensively investigated over the past few decades owing to their specific opto-electronic properties emerging from the quantum size effect present in NPs [1—4]. Among various types of semiconductor NPs, CdS quantum dots (QDs) are one of the most commonly used because of their potential application in solar cells, blue-light-emitting diodes, laser diodes and het-ero-junction bipolar transistors (HJBTs) [5—11].

In general, the mixing of Cd2+ ions from Cadmium precursors with Na2S or H2S along with various stabilizers and capping ligands in aqueous media [12—14] is the most common method of performing the aqueous synthesis of NPs. However, when we adopt an aqueous synthetic method to prepare CdS NPs, the resulting inhomogeneity leads to the broadening of the size distribution during the early stage of NP formation. This is because the precipitation of Cd2+ with S2- is a quicker process than homogeneous mixing [15]. Initially, Hayes, Henglein, Swayambunathan et al. [16—18] used the radiolytic methods by the electron pulse or gamma-ray to synthesize CdS NPs. These were the reported synthetic methods for a mixture of transition metals such as cadmium and 2-mercaptoethanol (2ME) containing sulfur in aqueous solution, as an irradiation method of external radiation. They studied

the effect on CdS cluster size via the irradiation dose, the ligand concentration, and the pH of solutions.

Recently, the synthesis PbS, CdS, CdSe, and CdSe/CdS nanostructures by using an external source such as microwaves, y-rays, Nd-YAG lasers, or high energy electron beams has been reported [19—23]. Mostafavi et al. produced a CdS cluster by adjusting the dose of y-rays using 2ME. Chen et al. produced the porous CdS nanoparticles by using CdCl2 and thiolac-etamide (TAA). Zhao B. et al. have synthesized CdS nanorods by using y-rays with a mixed solution prepared from CdS NPs and TAA having a pH below 3 [24-26].

On the other hand, regarding reports on the synthesis of CdS QDs using electron beams, it may be mentioned that Bogle et al. [27] reported that CdS NPs were synthesized by irradiating a solution, prepared by mixing CdCl2, thioglycerol, and carbon disulfide, with 6 MeV electrons. They reported that in the study of the variation in the intensity and peak position of the absorption spectrum for the solution samples exposed to different fluences of 6 MeV electrons, the absorption spectrum shifted toward the long wavelength region with an increase in the irradiated time. Pattabi et al. [28] studied the effects of 8 MeV electron irradiation on the optical properties of polyvinyl pyr-rolidone-capped CdS NPs embedded in polyvinyl alcohol (PVA), and reported that the average size of the

NPs is proportional to the electron beam dosage. However, these are no reports on reducing the emission intensity of surface defects related to quantum yield by using an external excitation source such as a high energy electron beam.

In this study, we have reported in detail on the radiation induced synthesis of CdS QDs in aqueous solutions and their optical properties. Based on our previous study (Yoo et al., 2011), we have used cadmium sulfide (CdCl2) and various concentrations of mercap-topropionic acid (MPA) in aqueous solution to prepare CdS QDs from an equal energy (10 MeV) and dose (100 kGy) of the electron beam without using any additional sulfur precursors [29]. MPA is a well-known thiol that contains a carboxyl group on one side and sulfhydryl group on the other side. It is widely used as a linker material between TiO2 and CdSe(S) quantum dots in QD based solar cells. By using electron beam irradiation, we have been able to obtain CdS quantum dots of good quality removed to surface defects with have uniformed distribution.

The synthetic procedure for CdS QD fabrication adopted in this study is as follows. First, CdCl2 was dissolved in 50 mL of distilled water contained in six different flasks to have a concentration of 2.5 mM. After rigorous stirring for 24 hours, 1 M NaOH was added to the solution until the pH of the solution reached 10. Six different amounts of CdCl2 were inserted into the flask to form Cd2+-MPA complexes in the solution, and the mixed solutions were stirred so that the MPA inserted were 0.5, 2.5, 5, 7.5, 10, and 20 mM, respec-

tively. A volume of 50 mL of each of the Cd2+-MPA aqueous solutions, which contained different amounts of MPA, was inserted into three different small quartz bottles (thickness of 0.5 mm) for electron beam irradiation. Then, 100 kGy of the 10 MeV electron beam was irradiated onto the Cd2+-MPA aqueous solutions through the open surface of the solution. The electron beam apparatus used was the ELV8 (EB-tech, Deajon, Korea). The electron beam source had an energy, current, window size, and pulse duration of10 MeV, 1 mA, 65x5 cm (beam uniformity >80%) and 400 ps, respectively. A schematic representation of the experimental set-up is shown in Fig. 1.

All the optical measurements were carried out within 48 h of electron beam irradiation. We illuminated the samples with a focused beam from a Phillips 7072 halogen lamp to measure the absorption spectra in the wavelength range of 300—800 nm. A Spex 1702 monochromator and a photon counter were used to detect the divergent beam. The radiation from a He—Cd laser (325 nm) was used as a pump beam for the PL measurements. Transmission electron microscopy (TEM), high-resolution transmission electron microscopy (HRTEM) was conducted in a JEOL JEM 2100F operating at 200 kV. A drop of the prepared sample was placed on a carbon coated copper grid and dried by inserting into the TEM sample chamber.

It is well known (Hoffman, 1973, Baxendale, 1982) that water irradiation with ionizing radiation produces the following molecular and radical species in solution [30, 31]

In addition, the reducing species e-q may react in an aqueous solution release with the SH-radical of 2-mercaptoethanol and react with Cd2+:

It has been shown that a Cd2+ ion is not free in a solution containing MPA such as thiol, but is present in the form of a polynuclear complex species RS-; De Brabander and van Pouk have concluded that such solutions contain polynuclear complexes having of the formula Cd2+{(Cd2+)3(RSH)5}„ as oligomers [32]. Said and Tuck also concluded that these polymers of cadmium dithi-olate exist in a free solution because the chemical bond between Cd2+ and RS- is strong [33]. Table 1 lists the relevant rate constants for radiolytically produced radicals with 3-Mercaptopropionic acid and Cd2+a [34, 35].

Figure 3 shows the variation in the absorption edge and ban