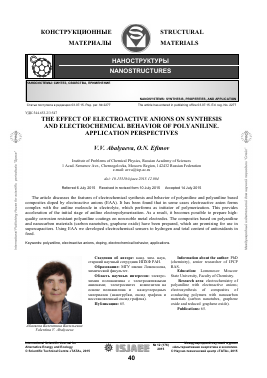 THE EFFECT OF ELECTROACTIVE ANIONS ON SYNTHESIS AND ELECTROCHEMICAL BEHAVIOR OF POLYANILINE. APPLICATION PERSPECTIVES

The article discusses the features of electrochemical synthesis and behavior of polyaniline and polyaniline based composites doped by electroactive anions (EAA). It has been found that in some cases electroactive anion forms complex with the aniline molecule in electrolyte, which performs as initiator of polymerization. This provides acceleration of the initial stage of aniline electropolymerization. As a result, it becomes possible to prepare high-quality corrosion resistant polyaniline coatings on non-noble metal electrodes. The composites based on polyaniline and nanocarbon materials (carbon nanotubes, graphene oxide) have been prepared, which are promising for use in supercapacitors. Using EAA we developed electrochemical sensors to hydrogen and total content of antioxidants in food.

Information about the author: PhD

Information about the author: PhD

Various electroactive polymers have been intensely investigated over the two past decades; moreover, polyaniline (PANI) is one of the most analyzed polymers. PANI is a 'workhorse' for researchers for several reasons, namely, because PANI is easily available and well-studied polymer stable in air, which can be a conductor and an isolator depending on oxidation state. In reduced state, PANI is soluble in several organic solvents and easily forms coatings on various materials. Therefore, it became possible to use PANI in different fields of engineering such as electrochemical energy storage systems (batteries and supercapacitors), electrochromic devices, optical and pH sensors, heterogeneous catalysis, gas-separating membranes, corrosion-resistant coatings and etc.) [1, 2]. Thus, it became necessary to analyze the possibility of

PANI modification for the development of desirable technological properties such as conductivity, solubility, morphology, ability to form films, adhesion to other materials (metals and polymers), electrochemical capacity, charge-discharge characteristics, stability and reproducibility of experimental data.

In aqueous and organic solvents, PANI shows electroactivity in the presence of protic acid in electrolyte. It is well known that at reversible electrochemical oxidation of leucoemeraldine form of PANI in acidic media (Fig. 1), anions X- are intercalated in a polymer matrix. Such intercalation is called the anionic doping of PANI. When PANI is doped by small and mobile anions, diffusion does not prevent the anions from leaving polymer while it is reduced and entering it while oxidized. Redox conversion in such systems is accompanied by structural changes in a polymer matrix.

Fig. 1. The reversible acid/base doping/dedoping and redox chemistry of polyaniline

The nature of anions which compensate charge in a conducting polymer matrix affects strongly its properties. Therefore, the choice of electrolyte for chemical or electrochemical synthesis allows one to modify polymer properties and, hence, widen the field of application [3-5]. Routine electrosynthesis (ES) of PANI is performed in aqueous H2SO4. Nevertheless, other strong acids such as HNO3, HCl, HBF4, HClO4, and CF3COOH are used as well. It was found that the type of anion defines morphology of PANI and stimulates formation of either compact (HBF4, HClO4, CF3COOH -the 1st class) or loose (H2SO4, HNO3, HCl - the 2nd class) polymer structure [6]. It is reported in [7, 8] that similarly, albeit weaker, to anions, alkali metal cations affect electropolymerization rate and properties of PANI with the effect decreasing in the row: Cs+>K+>Li+ >Na+. The effect of anion on porosity and swelling of PANI was investigated by standard porosimetry [9].

sj-j^ Calculation showed that the use of Cl", H2SO4,

of matrices with larger pore size upon swelling, while polymer matrices with organic CF3COO", CH3-C6H4-SO" anions are hydrophobic, in some cases being close to Teflon in hydrophobicity. PANI doping by more complex organic acids was investigated for improving of film formation. ES of PANI was carried out in the presence of camphor sulfonic acid [10], /-toluenesulfonic acid [11], substituted fluorosulfonic acids [12, 13], polystyrene sulfonic acid [14], and polyvinyl sulfonic acid [15]. Matrix oxidative polymerization of aniline in aqueous solution in the presence of poly(2-acrylamido-2-methyl-1-propane) sulfonic acid (PAPSA) provides the formation of a water soluble complex of polyaniline and PAPSA [16]. Substituted poly(styrene sulfonic) and various substituted polyacrylic acids were used as polyanions [17]. A molecular model of the complex formation between partially doped polyaniline (polycation) chains and negatively charged polyanion chains was suggested. It is a so-called double-stranded structure in which polyaniline macromolecules arranged along a polyanion macromolecule are held in such configuration due to electrostatic interaction forming twisted threads [17-21]. The syntheses afforded a series of water- and methanol-soluble matrix complex polyanilines that showed electroactivity at noticeably higher pH values which are important for the development of biosensors and other diagnostic devices for biological systems.

The search for new anions as dopants can reveal unexpected properties in the systems as it was shown, for example, in the synthesis of PANI in the presence of (+) -or (-)camphor-10-sulfonic acid. The synthesis afforded optically active chiral PANI, which retained its optically active configuration even after dopants had been removed from the polymer. The polymer 'remembered' its history after doping by hydrochloric acid as well [22-24].

The insertion of polyacid based polyanions into a polyaniline matrix allows polyanion to remain in polymer to prevent deprotonation in electrolytes with pH >4. As a result, redox activity and electric conductivity are retained [25]. Anion migration from polymer can also be lowered due to anions capable of forming chemical and coordination bonds with the PANI matrix, saving the polymer matrix.

All the above mentioned examples of the effect of anion on properties of PANI do not consider, in essence, electrochemical activity of anions. One of numerous classes of investigated anions is, in fact, a class of electroactive anions (EAA) or electroactive compounds bearing negatively charged groups. When inserted in PANI upon anionic doping, these compounds are able to increase electroactivity of polymer by their own electrochemical activity. New formed composite materials can show noticeably higher redox capacity as compared with PANI itself One can also expect that within potential range of electro-inactivity of PANI, the composite will retain electroactivity due to EAA inserted in the polymer.

Doping anions can be inserted into the polymer during either synthesis of polymer or subsequent cycling in the electrolyte containing them. Tetrasulfo anions of phthalocyanines of Fe and Co were one of the first electroactive polymers inserted in PANI. Thus prepared composites were tested to catalytic activity in reaction of reduction of 02 and showed low stability in time [2628]. The doping of PANI by [Fe(CN)6]3-/4- anions was 1 accompanied by polymer degradation [29]. The insertion into PANI of electroactive anions based on quinoid derivatives provided better electrochromic properties of new composites [30]. The correspond