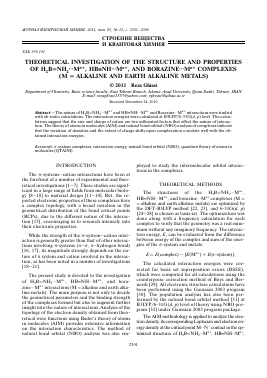 THEORETICAL INVESTIGATION OF THE STRUCTURE AND PROPERTIES OF H2B=NH2-Mw+, HB=NH-Mw+, AND BORAZINE-Mw+ COMPLEXES (M = ALKALINE AND EARTH ALKALINE METALS)

Abstract—The nature of H2B=NH2—Mn+ and HB=NH—Mn+ and Borazine—Mn+ interactions were studied with ab-initio calculations. The interaction energies were calculated at B3LYP/6-31G(d, p) level. The calculations suggest that the size and charge of cation are two influential factors that affect the nature of interaction. The theory of atoms in molecules (AIM) and natural bond orbital (NBO) analysis of complexes indicate that the variation of densities and the extent of charge shifts upon complexation correlate well with the obtained interaction energies.

The n-systems-cation interactions have been at the forefront of a number of experimental and theoretical investigations [1—7]. These studies are significant in a large range of fields from molecular biology [8—10] to material design [11—14]. But, the reported electronic properties of these complexes have a complex topology, with a broad variation in the geometrical distribution of the bond critical points (BCPs), due to the different nature of the interaction [15], encouraging us to research intensely into their electronic properties.

While the strength of the n-system—cation interaction is generally greater than that of other interactions involving n-systems (n—n, n—hydrogen bond) [16, 17], its magnitude strongly depends on the nature of n system and cation involved in the interaction, as has been noted in a number of investigations [18-21].

The present study is devoted to the investigation of H2B=NH2 "Mb+, HB=NH-"Mb+, and bora-zine--MB+ interactions (M = alkaline and earth alkaline metals). The main purpose is not only to decide the geometrical parameters and the binding strength of the complexes formed but also to augment further insight into the nature of interactions. Analysis of the topology of the electron density obtained from theoretical wave functions using Bader's theory of atoms in molecules (AIM) provides extensive information on the interaction characteristics. The method of natural bond orbital (NBO) analysis was also em-

ployed to study the intermolecular orbital interactions in the complexes.

The structures of the H2B=NH2-MB+, HB=NH "MB+, and borazine--MB+ complexes (M = = alkaline and earth alkaline metals) are optimized by the DFT-B3LYP method [22, 23], and 6-31G(d, p) [24—28] is chosen as basis set. The optimization was done along with a frequency calculation for each complex to verify that the geometry was a real minimum without any imaginary frequency. The interaction energy, E, can be evaluated from the difference between energy of the complex and sum of the energies of the n-system and metals:

The calculated interaction energies were corrected for basis set superposition errors (BSSE), which were computed for all calculations using the counterpoise correction method of Boys and Ber-nardi [29]. All electronic structure calculations have been performed using the Gaussian 2003 program [30]. The population analysis has also been performed by the natural bond orbital method [31] at B3LYP/6-31G(d, p) level of theory using NBO program [32] under Gaussian 2003 program package.

The AIM methodology is applied to analyze the electron density, its corresponding Laplacian and electron energy density at the critical point M—N- contact in the optimized structures of H2B=NH2 -Mb+, HB=NH-Mb+,

Energetic aspects. Table 1 presents the computed interaction energies (E), BSSE and corrected interaction energies for the complexes of H2B=NH2-Mn+, HB=NH-Mn+ and Bora-zine---Mn+. It can be seen that E values increase with increasing of metal atomic number. Also, these values show that the interaction strength of n-system with metals decrease as: borazine > HB=NH > > H2B=NH2. Investigating the magnitude of Ecorr, it can be found that the size and charge of the cation are influential factors determining the strength of the binding interaction in these systems. On the other hand, the Ecorr values of the complexes involving earth alkaline metals indicate the stronger interactions rather than alkaline metals interactions.

Structures. Table 2 gathers the BN and MN bond lengths of all the complexes (see Fig. 1). These values show that, when the radius of cation increases, the BN distances decrease. On the other hand, the geometrical analysis shows that the MN distances in HB=NH complexes are shorter than in H2B=NH2 complexes. It can be seen that there is the same trend as that of the interaction energy. When this bond is shorter, there is the stronger interaction. Also, Fig. 1 shows that borazine ring is distorted in complexes.

Atoms in molecules analysis. The analysis of electron density in terms of Bader's methodology (AIM) provides useful tools to confirm the presence of hydrogen-bond interactions. In Bader's theory, a large electronic density (p) at the hydrogen-bond critical

Fig. 1. Graphical representation ofthe optimized geometry and molecular graph of the H2B=NH2---Mb+ and HB=NH-MB+ and Borazine---MB+ complexes. The positions of critical points have been shown.

point (BCP) and a positive value of its Laplacian (V2p) indicate a strong hydrogen bond. Recently, the AIM methodology has been successfully applied to the study of dihydrogen-bonded systems [12, 18, 34].

Table 3 lists the values of p and V2p in the H2B=NH2"Mb+, HB=NH-Mb+, and bora-zine-MB+ complexes at the B3LYP/6-31G(J,p) level. It contains the electron densities at the bond critical points of N-M and BN bonds.

Different features of the electron densities obtained in the AIM framework are summarized as follows.

2. It is interesting that for all M---N contacts analyzed, the values of Laplacians (V2p) are positive, implying that all complexes are stabilized by closed shell bonds.

3. In addition, for all complexes the electronic density and the positive values of V2p at the M---N contacts gradually decrease with the atomic number of metals.

4. The variation of electron density at the N---M contact critical points in different complexes can al-

so serve as another measure of the strength of interactions. Figure 2 represents the plot of calculated interaction energies of complexes versus their electron density at the N---M contact critical points. The p and V2p values in the corresponding complexes show that they follow the same trend as interaction energy sequence.