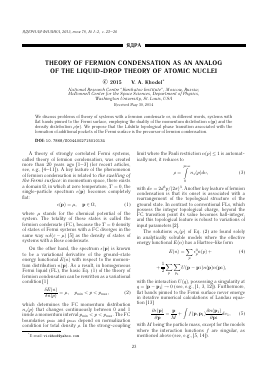 We discuss problems of theory of systems with a fermion condensate or, in different words, systems with flat bands pinned to the Fermi surface, employing the duality of the momentum distribution n(p) and the density distribution p(r). We propose that the Lifshitz topological phase transition associated with the formation of additional pockets of the Fermi surface is the precursor of fermion condensation.

A theory of strongly correlated Fermi systems, called theory of fermion condensation, was created more than 20 years ago [1—3] (for recent articles, see, e.g., [4—11]). A key feature of the phenomenon of fermion condensation is related to the swelling of the Fermi surface: in momentum space, there exists a domain Q, in which at zero temperature, T = 0, the single-particle spectrum e(p) becomes completely flat:

On the other hand, the spectrum e(p) is known to be a variational derivative of the ground-state energy functional E(n) with respect to the momentum distribution n(p). As a result, in homogeneous Fermi liquid (FL), the basic Eq. (1) of the theory of fermion condensation can be rewritten as a variational condition [1]

which determines the FC momentum distribution n*(p) that changes continuously between 0 and 1 inside a momentum interval pm;n <p < pmax. The FC boundaries pmin and pmax depend on normalization condition for total density p. In the strong-coupling

limit where the Pauli restriction n(p) < 1 is automatically met, it reduces to

with dv = 2d3p/(2n)3. Another key feature of fermion condensation is that its onset is associated with a rearrangement of the topological structure of the ground state. In contrast to conventional FLs, which possess the integer topological charge, beyond the FC transition point its value becomes half-integer, and this topological feature is robust to variations of input parameters [2].

The solutions n*(p) of Eq. (2) are found solely in analytically solvable models where the effective energy functional E(n) has a Hartree-like form

with M being the particle mass, except for the models where the interaction functions f are singular, as mentioned above (see, e.g., [5, 14]).

Since numerical calculations of Eq. (5) are practically the sole source of information on the momentum distribution n(p) beyond the point of a topological rearrangement of the Landau state, concerns were repeatedly voiced that in Fermi systems with interaction functions regular in momentum space, nontrivial solutions of Eq. (2) are nonexistent, allegedly due to violation of analytic properties, inherent in relevant equations of FL theory. Therefore beyond the critical point, breeding additional Lifshitz pockets of the Fermi surface with FL occupation numbers 0,1 [14, 15] is the single possible alternative.

However, as we will see, this is not the case. In strongly correlated Fermi systems, phases with the FC do exist irrespective of analytic properties of the input. The analogous situation takes place in the well-studied liquid-drop theory (LDT) of atomic nuclei. Although this theory is formulated in coordinate space, rather than in momentum space, both spaces are equivalent from the mathematical standpoint, and the momentum distribution n(p) is dual to the density p(r). In condensed-matter theory, this circumstance has been employed already for more than 20 years (see, e.g., [1,6, 16]), and therefore it is instructive to exploit the duality to clarify the disputed topic.

Since N is finite, the true density p(r) must rapidly fall at r -^ro. This fact is of paramount importance for the analytic structure of solutions of Eq. (9), depending on whether f equals to 0 or not. In the case f = 0, Eq. (9) is met at any distance, implying that the solution p(r) remains finite, analogously to the case of the Rutherford electron atom in the Thomas—Fermi (TF) model [17]. Contrariwise, at f < 0 Eq. (9) cannot be satisfied at r ^ro, because the l.h.s. of this equation remains finite, while the r.h.s. comes to nought. This compels us to conclude that Eq. (9) holds only at r < R, beyond which p(r) vanishes identically. The situation is reminiscent of the situation that takes place in electrically charged atoms, which have a finite TF radius R [17]. Noteworthy, the kinetic term pF(p)/2M possesses the same analytic properties as the density p itself, and therefore its presence on the r.h.s. of Eq. (9) or absence in the limited case M ^ro has no impact on this conclusion.

where N stands for a finite particle number. Obviously, these two equations are equivalent to Eqs. (2) and (3).

To be more specific, the LDT energy functional E(p) consists of the kinetic energy t(p), proportional to p5/3(r), and an interaction term, often written in the Skirme-like form

with interaction potentials V and W, vanishing at large distances between interacting particles. For completeness, this expression should be supplemented with an external field term, say, a gravitational one, however, in the case under consideration, it is of little interest.

This equation is the Fredholm equation of the first kind, which is an ill-posed problem. However, to be certain that a nontrivial solution of the variational condition (6) exists, it is sufficient to verify that the above energy functional attains minimum for a simple class of variational functions. If so, nontrivial solution of Eq. (10) does exist, and independently of the presence or absence of singularities in the interaction potentials V and W, this solution is not analytic, since analytic functions that identically vanish in some region must be identically zero everywhere.

The derivative 5E(p)/5p(r) is compared with the single-particle energy e(r), while the derivative de(r)/dr determines the force acting on a probe particle. Definitely, this force identically vanishes in the nuclear interior, while outside the nucleus it reduces to the Coulomb term, produced by the proton component. Thereby the function de(r)/dr is not analytic as well. Bearing in mind the duality, it is instructive to rewrite the spectrum e(r) itself in the form

structure has the closed form

with the single difference: the first kinetic-energy term on the r.h.s. of this equation plays the part of an external harmonic field. The corresponding variational equation (2) has the explicit form

supplemented with normalization condition (3). In the strong-coupling limit one has pm;n = 0, and therefore n(p) = 0 at p > pmax, otherwise n(p) = 1 at p < pmin, due to the Pauli restriction. Evidently, the quasiparticle momentum distribution n(p) of the FC problem does not possess properties inherent in analytic functions. Behavior of the group velocity Oe(p)/Op, which identically vanishes in the FC region, is analogous to that of the derivative 3e(r)/3r, vanishing in the nuclear interior. This implies that the group velocity de(p, n*)/dp is not analytic. Definitely, the same is valid for the single-particle spectrum e(p, n*) of the FC problem, given by equation

analogous to Eq. (11). Within the context of the Landau approach to the theory of Fermi liquid, equation appropriate for numerical calculations of the FC

with fi standing for the first Legendre harmonic of the Landau interaction function f(p, pi), which is a phenomenological input.

It should be emphasized that Eqs. (5) and (15) are different. In the strong-coupling limit where the Pauli restriction n(p) < 1 is of minor importance, the domain of the Lifshitz phase diagram, occupied by the phase with the FC, coincides with the domain where Eqs. (2) and/or (15) have nontrivial solution n* (p) .In this limit, a different solution nL, that satisfies Eq. (5) and consists of a se