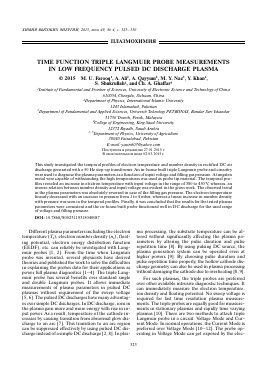 1Institute of Fundamental and Frontier of Sciences, University of Electronic Science and Technology of China

This study investigated the temporal profiles of electron temperature and number density in rectified DC air discharge generated with a 50 Hz step-up transformer. An in-house built triple Langmuir probe and circuitry were used to diagnose the plasma parameters as a function of input voltage and filling gas pressure. A tungsten metal wire capable of withstanding the high temperatures was used as probe tip material. The temporal profiles revealed an increase in electron temperature with input voltage in the range of 380 to 450 V, whereas, an inverse relation between number density and input voltage was evident in the given work. The observed trend in the plasma parameters was absolutely reversed in case of the filling gas pressure. The electron temperature linearly decreased with an increase in pressure from 1 to 4 mbar, whereas a linear increase in number density with pressure was seen in the temporal profiles. Finally, it was concluded that the results for the tested plasma parameters were consistent and the in-house built probe functioned well in DC discharge for the used range of voltage and filling pressure.

Different plasma parameters including the electron temperature (Te), electron number density (ne), floating potential, electron energy distribution function (EEDF), etc. can reliably be investigated with Langmuir probes [1, 2]. From the time when Langmuir probe was invented, several physicists have derived theories and published the work to solve the difficulties in explaining the probes data for their applications as power full plasma diagnostics [1—4]. The triple Lang-muir probe has several benefits over standard single and double Langmuir probes. It allows immediate measurements of plasma parameters in pulsed DC plasmas without requirement of the sweep voltage [5,6]. The pulsed DC discharges have many advantages over simple DC discharges. In DC discharge, ions in the plasma gain more and more energy with rise in input power. As a result, temperature of the cathode increases by causing transition from abnormal glow discharge to an arc [7]. This transition to an arc region can be suppressed effectively by using pulsed DC discharge instead of a simple DC discharge [2, 8]. In plas-

ma processing, the substrate temperature can be altered without significantly affecting the plasma parameters by altering the pulse duration and pulse repetition time [8]. By using pulsing DC source, the plasma generation system can be operated even at higher powers [9]. By choosing pulse duration and pulse repetition time properly, the hollow cathode discharge geometry can also be used in plasma processing without damaging the cathode due to overheating [8, 9].

For such plasmas, the triple probes are preferred over other available intrusive diagnostic techniques. It can immediately measure the electron temperature, ion density and floating potential. No sweep voltage is required for fast time resolution plasma measurements. The triple probes are equally good for measurements in stationary plasmas and rapidly time varying plasmas [10]. There are two methods to attach triple Langmuir probe in a circuit: Voltage Mode and Current Mode. In normal operations, the Current Mode is preferred over Voltage Mode [10—12]. The probe operating in Voltage Mode can get exposed by the elec-

A triple Langmuir probe consists of three exposed tips; two of them are biased with a DC voltage source and third one acts as an independent floating probe [10, 12]. Let's consider three tips namely P1, P2, and P3 inserted into the plasma discharge. The biasing voltage across P1 and P2 is Vd1-2, whereas potential differences between probe 1 and 3 is Vd1-3. These voltage differences and the respective currents allow us to evaluate the plasma parameter such as electron temperature and electron number density [16, 17]. If V1, V2 and V3 are probe potential with respect to the space potential V in Fig. 1, then the potential different can be calculated as:

The current through probe can be written as

As the probe 3 is at floating potential, therefore it draws no net current

The electron temperature can be measured under the assumption Iis1 = Iis2. The assumption was made due to same probe areas.

Using equation (4), the current through the probes can be expressed as:

Fig. 2. Schematic of the triple probe design and auxiliary circuit.

Herein, equation (11) was used to measure the electron temperature in DC discharge plasma [10].

The electron number density was evaluated by considering the equation for ion saturation current:

Herein, equation (12) was used to measure the electron number density in DC discharge plasma. In this study, an in-house built triple Langmuir probe of tungsten metal was used to investigate a pulsing DC air discharge generated between two parallel electrodes housed in a glass chamber. The corresponding plasma parameters such as electron temperature, DC biased probe current, electron number density and ion saturation current were discussed as a function of input operating conditions.

Schematic of the triple probe design and circuitry used in current investigations is shown in Fig. 2. The probes were constructed with three tungsten wires of equal length and cross-sectional area. The plasma exposed tips of the probe were 3 mm in length and 0.75 mm in diameter. The Pyrex glass was used to insulate the probe wires from each other and from the plasma chamber. The inter-tip spacing was fixed at 2.0 mm. Only 3 mm tip was exposed to the plasma to grab the information on the plasma parameters of interest. A Teflon casing was used to hold the probe geometry and to keep the tip alignment right. To fix wires within the Teflon tube and to stop air leakage, tar seals were used to fill the empty spaces. Outside the plasma chamber,

the probe wires were connected to the auxiliary circuit with the help of BNC connectors. A 50 V DC power supply was used to bias the probes P1 and P2 and to get the I—V characteristics on a digital oscilloscope.

The DC discharge plasma setup used in current study is illustrated in Fig. 3. The air discharge plasma was generated at different applied voltages and filling pressures by using a pulsed DC source, which is more favorable for plasma generation as compared to the simple DC sources. Plasma Research and Applications Laboratory, National Tokamak Fusion Programme (NTFP) Islamabad provided the experimental facility to conduct the given research work on pulsing DC air discharges. Triple Langmuir probe was locally fabricated and used to study the temporal variations in the electron temperature and electron number density as a function of applied voltage and filling pressure.

The plasma chamber was composed of a Pyrex glass cylinder of 28 cm height and 16 cm diameter. Two circular brass electrodes of 5 cm diameter and 4 cm inter electrode spacing were housed in the plasma chamber in a parallel plate configuration. The base electrode was grounded, whereas the upper electrode was powered through inductive loads. Voltage obtained from the pulsing DC network was applied to anode through inductive load, which was limiting and controlling the discharge current. True RMS Multimeter (FLUKE 175) was used to measure the applied voltage between the electrodes, whereas Digital Clamp Multimeter (UT 201) was used to determine the discharge current. A digital Storage Oscilloscope was used to measure the potential difference (Vd1-2) of positively biased probe P1 and floating probe P2, current through the floating probe and temporal profiles.

The discharge chamber was coupled with a rotary pump to achieve the desire pressure inside the plasma chamber. Two small sized ports were used to inject air in the chamber and to couple the capsule type gauge and Alpert Pirani gauge RFG 720 to monitor the

working pressure. A 50 Hz and 220 V step-up transformer was used as power source. The output of the transformer was controlled by using a variac. A full wave rectifier circuit was converting AC signal