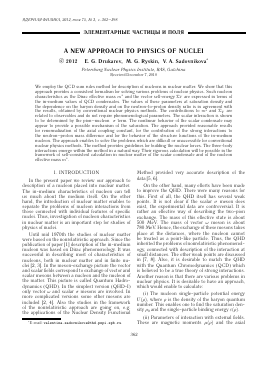 We employ the QCD sum rules method for description of nucleons in nuclear matter. We show that this approach provides a consistent formalism for solving various problems of nuclear physics. Such nucleon characteristics as the Dirac effective mass m* and the vector self-energy are expressed in terms of the in-medium values of QCD condensates. The values of these parameters at saturation density and the dependence on the baryon density and on the neutron-to-proton density ratio is in agreement with the results, obtained by conventional nuclear physics methods. The contributions to m* and are related to observables and do not require phenomenological parameters. The scalar interaction is shown to be determined by the pion—nucleon a term. The nonlinear behavior of the scalar condensate may appear to provide a possible mechanism of the saturation. The approach provided reasonable results for renormalization of the axial coupling constant, for the contribution of the strong interactions to the neutron—proton mass difference and for the behavior of the structure functions of the in-medium nucleon. The approach enables to solve the problems which are difficult or unaccessible for conventional nuclear physics methods. The method provides guidelines for building the nuclear forces. The three-body interactions emerge within the method in a natural way. Their rigorous calculation will be possible in the framework of self-consistent calculation in nuclear matter of the scalar condensate and of the nucleon effective mass m*.

Until mid 1970th the studies of nuclear matter were based on the nonrelativistic approach. Since the publication of paper [1] description of the in-medium nucleon was based on Dirac phenomenology. It was successful in describing most of characteristics of nucleons, both in nuclear matter and in finite nuclei [2, 3]. In the meson-exchange picture the vector and scalar fields correspond to exchange of vector and scalar mesons between a nucleon and the nucleon of the matter. This picture is called Quantum Hadro-dynamics (QHD). In the simplest version (QHD-I) only vector u and scalar a mesons are involved. In more complicated versions some other mesons are included [2, 4]. Also the studies in the framework of the nonrelativistic approach are going on, e.g. the applications of the Nuclear Density Functional

On the other hand, many efforts have been made to improve the QHD. There were many reasons for this. First of all, the QHD itself has several weak points. It is not clear if the scalar a meson does exist, the experimental data are controversial. It is rather an effective way of describing the two-pion exchange. The mass of this effective state is about 500 MeV. The mass of vector u meson is about 780 MeV. Hence, the exchange of these mesons takes place at the distances, where the nucleon cannot be treated as a point-like particle. Thus, the QHD inherited the problems of nonrelativistic phenomenology, connected with description of the interaction at small distances. The other weak points are discussed in [7, 8]. Also, it is desirable to match the QHD with the Quantum Chromodynamics (QCD) which is believed to be a true theory of strong interactions. Another reason is that there are various problems in nuclear physics. It is desirable to have an approach, which would enable to calculate:

(i) The nucleon single-particle potential energy U(p), where p is the density of the baryon quantum number. This enables one to find the saturation density po and the single-particle binding energy e(p).

(ii) Parameters of interaction with external fields. These are magnetic moments /j.(p) and the axial

coupling constant gA (p). The latter is important for understanding of the chiral properties of the matter.

(iii) Neutron—proton mass splitting in isotope-symmetric matter. It was observed for a number of nuclei, being known as the Nolen—Schiffer anomaly.

(iv) Structure functions of the deep inelastic scattering. They describe the internal structure of nucleons. Investigation of the latter is important for construction of quark models of nucleons, for studies of the confinement, etc. The reasons for some of the in-medium modifications of the structure functions are still obscure. They become a subject for discussions from time to time.

(v) The single-particle potential energy for hyperons in nuclear matter. Can a system of hyperons be stable? In other words, can a strange matter exist?

As we said earlier, the first problem was solved in framework of Dirac phenomenology [1,2] for the values of density close to the saturation value. The nucleon was considered as a relativistic particle, moving in superposition of vector and scalar fields V^ and $. In the rest frame of the matter V^ = The dynamics of the nucleon is described by equation

with A = A^y^, q^ = —id^. In nuclear matter the fields V and $ depend only on the density p, and do not depend on the space coordinates. The values of the fields are adjusted to reproduce either the data on nucleon—nucleon (NN) scattering or the nuclear data — see, e.g., [3]. However, each of the other listed problems requires additional improvements of the QHD. Turning to the other problems from the above list, note that the axial coupling constant changes due to polarization of medium by pions [9], with a crucial role of the delta-isobar excitations [10]. Thus, in order to solve the second problem one should introduce additional degrees of freedom into the QHD. Also, the third problem requires introduction of the nuclear forces, which break the isospin invariance [11]. Finally, the fourth problem is just un-accessible for traditional methods of nuclear physics.

There were several attempts to combine the QHD and the quark structure of nucleons. The NN forces, constructed within such models enabled to reproduce semi-quantitatively or quantitatively the nucleon characteristics in nuclear matter. In the Quark-Meson Coupling (QMC) model [12] the nucleon was considered as a three-quark system in a bag. The quarks were directly coupled to a and u mesons. The values of the nucleon effective mass m* and of the in-medium coupling constant gA appeared to be somewhat smaller than in QHD [13]. This model is employed nowadays as well [14].

During the two latest decades much work was done on development of the Effective Field Theory (EFT). The starting point is the most general La-grangian, which includes nucleons and pions as the degrees of freedom and respects all the symmetries of QCD, i.e. the Lorentz invariance, chiral symmetry, etc. [16]. The applications of the EFT is usually combined with the expansion in powers of the pion mass (Chiral Perturbation Theory). Expansion in powers of low momenta is also usually carried out. The works, based on the EFT are reviewed in [17], for some of recent developments — see [18]. The EfT approach does not touch the quark degrees of freedom of the nucleons.

All the traditional nuclear physics approaches face difficulties in attempts to describe the Nn interaction at small distances. On the other hand, the QCD is believed to be a true theory of strong interactions. It has many unsolved problems at large distances. However, it becomes increasingly simple at small distances due to the asymptotic freedom. The interaction of quarks and gluons, which are the ingredients of QCD, can be treated perturbatively. This is known as the asymptotic freedom [19]. It is tempting to use this feature of QCD in building the nucleon forces. One should take into account, however, that due to spontaneous breakdown of the chiral symmetry of the QCD, the vacuum expectations of some QCD operators (condensates) have nonzero values.

In medium with a nonzero value of the density of the baryon quantum number the condensates change their values. Also, some other condensates, which vanish in vacuum, obtain nonzero values.

The QCD sum rules (SR) method describes the vacuum hadron parameters basing on the quark dynamics at short distances, where the asymptotic freedom works. In other words, the dynamics of the quark system at the distances of the order of the confinement radius is described basing on that at small distances, where it is determined by the QCD condensates. Thus, the SR method enables to describe the hadron parameters in terms of the QCD condensates.

The approach was worked out in [20], where it was used for mesons. It is based on the dispersion relation for the function describing the system which carries the quantum numbers of the hadron. The SR method was successfully applied for nucleons in vacuum [21], describing all their static and some of dynamical

characteristics — see [22, 23] for a review. Thus, it looks reasonable to try to apply the QCD SR method for the description of nucleons in nuclear