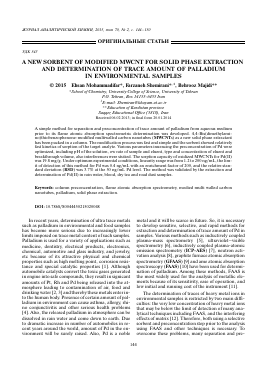 A simple method for separation and preconcentration of trace amount of palladium from aqueous medium prior to its flame atomic absorption spectrometric determination was developed. 4,4-Bis(dimethylami-no)thiobenzophenone-modified multiwalled carbon nanotubes (MWCNTs) as a new solid phase extractant has been packed in a column. The modification process was fast and simple and the sorbent showed relatively fast kinetics of sorption of the target analyte. Various parameters inuencing the preconcentration of Pd were optimized, including pH of the solution, ow rate of sample and eluent, type and concentration of eluent and breakthrough volume, also interferences were stutied. The sorption capacity of oxidized MWCNTs for Pd(II) was 19.8 mg/g. Under optimum experimental conditions, linearity range was from 1.2 to 200 ng/mL, the limit of detection of this method for Pd was 0.4 ng/mL with an enrichment factor of 200, and the relative standard deviation (RSD) was 3.7% at the 50 ng/mL Pd level. The method was validated by the extraction and determination of Pd(II) in rain water, blood, dry tea and road dust samples.

In recent years, determination of ultra trace metals such as palladium in environmental and food samples has become more serious due to increasingly lower limits imposed on trace metal content of such samples. Palladium is used for a variety of applications such as medicine, dentistry, electrical products, electronics, chemical, automotive and glass industry, and jewelry, etc because of its attractive physical and chemical properties such as high melting point, corrosion resistance and special catalytic properties [1]. Although automobile catalysts convert the toxic gases generated in engine into safe compounds, they result in signicant amounts of Pt, Rh and Pd being released into the atmosphere leading to contamination of air, food and drinking water [2, 3] and thereby these metals enter into the human body. Presence of certain amount of palladium in environment can cause asthma, allergy, rhino conjunctivitis and other serious health problems [4]. Also, the released palladium in atmosphere can be dissolved in rain water and come down to earth. Due to dramatic increase in number of automobiles in recent years around the world, amount of Pd in the environment will be surely raised. Also, Pd is a noble

metal and it will be scarce in future. So, it is necessary to develop sensitive, selective, and rapid methods for extraction and determination of trace amount of Pd in samples. Various methods such as inductively coupled plasma-mass spectrometry [5], ultraviolet—visible spectrometry [6], inductively coupled plasma-atomic emission spectrometry (ICP-AES) [7], neutron activation analysis [8], graphite furnace atomic absorption spectrometry (GFAAS) [9] and ame atomic absorption spectroscopy (FAAS) [10] have been used for determination of palladium. Among these methods, FAAS is the most widely used for the analysis of metallic elements because of its sensitivity, ease of operation, and low initial and running cost of the instrument [11].

The determination of traces of heavy metal ions in environmental samples is restricted by two main difficulties: the very low concentration of heavy metal ions that may be below the limit of detection of many analytical techniques including FAAS, and the interfering effects of matrix [12]. Therefore, both using a selective sorbent and preconcentration step prior to the analysis using FAAS and other techniques is necessary. To overcome these problems, many separation and pre-

concentration methodologies such as dispersive liquid-liquid microextraction (DLLME) [13, 14], cold induced aggregation microextraction [6] have been used. Despite the many benefits of these methods, the choice of the extraction solvent is its main drawback. The different modes of DLLME demonstrate that the convenient retrieval of organic solvents after extraction has crucial importance in such techniques. It is critical that the extraction solvent be of higher density than water, in order to form a stable cloudy solution capable of being separated by centrifuging. So, several recent works have reported the use of low-density organic solvents in DLLME. But, most of these procedures require additional processing steps, apart from the mandatory centrifugation, including refrigeration to freeze the organic solvent, manually retrieving it to let it thaw, and use of additional materials such as surfactants.

Solid phase extraction (SPE) is widely used for preconcentration of Pd compared with other separation and preconcentration methods [15—17] due to its simplicity, rapidity, minimal cost due to low consumption of reagents, high enrichment factors, absence of emulsion and ability ofcombination with different detection techniques in on-line or off-line mode [18]. Various solid phase extractants, including chelating resin [19], dithiocarbamate-coated fullerene C60 [20], modified silica [21], nanometric titanium dioxide [22], multi-walled carbon nanotubes without chelating agent [23], carbon nanofibers [24], modified organo nanoclay [25], gamma-alumina nanoparticles [16] and others [26—29] has been used for preconcentration and determination of palladium. An attractive tendency in the field of solid phase extraction is finding new sorbent materials with expressive performance, providing high chemical resistance, selectivity, large surface area, and high sorption capacity. Among these adsorbents, nano materials have been frequently offered in SPE processes as a solid phase due to their special properties, which exhibit good adsorption efficiency especially due to their high specific surface area and large number of active sites for interaction with species. Without any doubt, the use of carbon nanotubes (CNTs) in SPE is among the most important applications of these materials in analytical science. Their use is based on CNTs properties suitable for SPE, like ability to establish interactions as well as excellent Van der Waals interactions with other molecules, in particular with hydro-phobic ones. They also possess a large surface area, especially on the outside, and interstitial spaces within nanotubes bundles. Their chemical, mechanical and thermal stability should also be considered [30—32]. The oxidation of CNTs surface can cause a more hydrophilic surface and large number of oxygen-containing polar functional groups, such as, —COOH, —OH, —NO2 and —HSO3, which increases the ion-exchange and hydrogen bonding capability of the CNTs [33]. The hexagonal arrays of carbon atoms in graphite sheets of CNTs

surface are ideal for strong interactions with other molecules [34]. MWCNTs, due to electrostatic interactions including n-n interaction, hydrogen bonding, and electron donor—acceptor complex formation can be modied and functionalized by large number of compounds [10, 32, 35, 36]. Modification the surface of CNTs with a specific organic chelating agent like 4,4-bis(dimethylamino)thiobenzophenone (TMK) can cause Pd(II) adsorb on its binding sites on the carbon nanotubes more easily than other coexisting ions, which makes the adsorption of Pd(II) more efficient.

The goal of this research was to investigate the analytical potential of modified MWCNTs with TMK for preconcentration of trace amount of Pd(II) in samples prior to its FAASdetermination. Oxidized MWNTs were modified and used in preconcentration column for determination of palladium in rain water, blood, dry tea and road dust.

Apparatus, ragents and materials. The determination of Pd was carried out using the Spectra AA from Varian 220, equipped with an air-acetylene burner. Measurements were carried out in the peak area mode at 244.8 nm, using a spectral slit width of 0.2 nm. Background correction has been used with deuterium-lamp. The lamp currents were set at 5 mA for Pd. The pH values were measured with a pH-meter Model 692 from Metrohm supplied with a glass-combined electrode. A funnel-tipped glass tube (80 x 10 mm) was used as column for preconcentration.

All reagents used were of analytical grade. TMK, 1-propanol, thiourea, acetic acid, sodium acetate, and all salts used were obtained from Merck (Darmstadt, Germany). A 0.02% solution of TMK was prepared by dissolving it in 1-propanol and was then kept far from light. Stock standard solution (1000 mg/L) of palladium was obtained from Merck (Darmstadt, Germany). The working standard solutions were prepared by appropriate step by step dilution of the stock standard solutions. A buffer solution (pH 5) was prepared by mixing appropriate amounts ofacetic acid and sodium acetate. MWCNTs (95% purity) with an average outer diameter of3—20 nm, length of1—10 ^m, number of walls 3—15 and surface area of 350 m2/g were obtained from Plasma Chem. GmbH (Berlin, Germany).

Oxidation and modification of MWCNTs. Prior to use, MWCNTs were oxidized with concentrated HNO3 according to the literature, in order to create binding sites onto the surface of MWCNT [37]. The oxidation was carried out by the dispersion of 3.0 g of MWCNTs into 25 mL of concentrated HNO3, and then reuxing for 4 h at 100°C. Afterward, the oxidized MWCNTs were washed with distilled water to remove any excess nitric acid, and then 50 mL of a 0.02% solution of TMK in 1-propanol was a