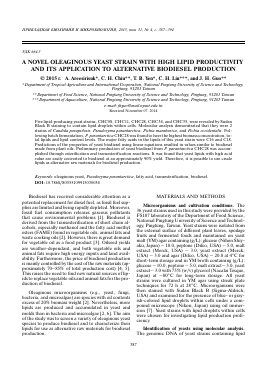 Five lipid-producing yeast strains, CHC08, CHC11, CHC28, CHC34, and CHC35, were revealed by Sudan Black B staining to contain lipid droplets within cells. Molecular analysis demonstrated that they were 2 strains of Candida parapsilosis, Pseudozyma parantarctica, Pichia manshurica, and Pichia occidentalis. Following batch fermentation, P. parantarctica CHC28 was found to have the highest biomass concentration, total lipids and lipid content levels. The major fatty acids in the lipids of this yeast strain were C16 and C18. Predictions of the properties of yeast biodiesel using linear equations resulted in values similar to biodiesel made from plant oils. Preliminary production of yeast biodiesel from P. parantarctica CHC28 was accomplished through esterification and transesterification reactions. It was found that yeast lipids with high acid value are easily converted to biodiesel at an approximately 90% yield. Therefore, it is possible to use crude lipids as alternative raw materials for biodiesel production.

Biodiesel has received considerable attention as a potential replacement for diesel fuel, as fossil fuel supplies are limited and being rapidly depleted. Moreover, fossil fuel consumption releases gaseous pollutants that cause environmental problems [1]. Biodiesel is derived from the transesterification of short chain alcohols, especially methanol and the fatty acid methyl esters (FAME) found in vegetable oils, animal fats and waste cooking oils [2]. However, there is great demand for vegetable oil as a food product [3]. Oilseed yields are weather-dependant, and both vegetable oils and animal fats require high energy inputs and land availability. Furthermore, the price of biodiesel production is mainly controlled by the cost of the raw materials (approximately 70—85% of total production cost) [4, 5]. This raises the need to find new natural sources of lipids to replace vegetable oils and animal fats for the production of biodiesel.

Oleaginous microorganisms (e.g., yeast, fungi, bacteria, and microalgae) are species with oil contents excess of 20% biomass weight [2]. Nevertheless, more lipids are produced and accumulated in yeast and molds than in bacteria and microalgae [2, 6]. The aim of the study was to screen a variety of oleaginous yeast species to produce biodiesel and to characterize their lipids for use as alternative raw materials for biodiesel production.

Microorganisms and cultivation conditions. The

droplets were extracted and purified with the AxyPerp Multisource Genomic DNA Miniprep Kit (Axygen Biosciences, USA) using standard manufacturer protocol. Amplification reactions were carried out in a Takara PCR Thermal Cycler (Takara Bio Inc., Japan). Forward (NL1) and reverse (NL4) sequence primers were 5' -GCATATCAATAAGCGGAGGAAAAG-3' and 5'-GGTCCGTGTTTCAAGACGG-3' [8]. PCR was performed according to Senses-Ergul et al. [9] modified to include the following steps: an initial de-naturation at 95°C for 3 min, 35 cycles of denaturation at 92°C for 1 min, annealing at 55°C for 1 min, extension at 72°C for 1 min and a final extension at 72°C for 5 min. PCR products were sequenced by Tri-I Biotech. (Taipei, Taiwan). Partial DNA sequencing was compared with BLAST databases at NCBI [10]. The resulting sequences were considered identical to currently available sequences of known yeasts as their identification correlations were >98%.

Preliminary biodiesel production from oleaginous yeast. The pretreatment process (esterification) used to produce biodiesel from yeast lipids with high acid value was completed twice, - from raw lipids and then from the concentrated product of the first stage. Both reactions were carried out in a closed-lid 500 mL glass bottle using an acid catalyst [11]. Yeast lipids were added to the bottle and preheated to 60°C for 15 min, and 0.35 v/v methanol-lipid ratio and 1.0% v/v H2SO4 (Nihon Shiyaku, Japan) were then added. The reaction was performed at 60°C for 1 h, after which the mixture was transferred into a separation funnel and allowed to settle for 1 h. The upper layer, consisting of a methanol-water fraction, was then removed and the lower layer (product) was used as the raw material for the second processing. Subsequently, the product of esterification was reacted with 0.25 v/v methanol-oil ratio and 0.5% w/v NaOH (Nihon Shiyaku, Japan) as an alkaline catalyst at 60°C for 1 h. The mixture was allowed to settle overnight before separating the glyc-

erol from the lower layer in a separation funnel. The ester product in the upper layer was biodiesel, which was washed with distilled water 3 times to remove the glycerol residue, NaOH, soap, and methanol.

Analytic methods. Five mL of each culture were harvested by centrifugation at 10,400 x g using Hitachi Refrigerated Centrifuge CR21GII (Hitachi, Japan) under 4°C for 10 min and washed twice with 5 mL distilled water. Cleaned cells were dried at 60°C to a constant weight, usually for 24 h, and biomass was determined gravimetrically [12].

Total lipids were extracted with a mixture of chloroform and methanol according to the method proposed by Bligh and Dyer [13]. Finally, the organic lower layer containing lipids was heated in hot water at 65°C until the solvent completely evaporated. The solvent-free lipid was dried at 60°C and total lipids expressed as total amount of lipids (g/L) that extracted from yeast biomass and lipid content expressed as the total lipids in relation to the dry biomass (%, w/w) were determined.

Fatty acid composition was determined with gas chromatography (GC) as FAME. Lipid samples (0.05 g) were mixed with 4 mL chloroform (Seedchem, Australia) and 0.5 mL of an internal standard (Fluka, USA). N2 gas was flushed through the solution until chloroform was completely removed and 2 mL 0.5 N KOH in methanol was added. Test tubes were tightly closed, vortex-mixed for 30 s, kept in boiling water for 10 min, and then cooled to room temperature. Then, 2 mL 0.7 N HCl in methanol and 3 ml BF3 (Sigma-Al-drich, USA) were added, sealed with a screw cap, vortex-mixed and boiled for 10 min. Finally, 3 mL of saturated NaCl solution and 2 mL of hexane (Tedia, USA) were added. After the two layers separated, the upper layer was filtered through a 0.22 ^m PVDF membrane (Pall Corporation, USA) before being injected into the GC. FAME analyses were carried out with TRACE GC Ultra (Thermo Scientific, USA). The SPTM-2560 fused silica capillary column (100 m x x 0.25 mm i.d., 0.20 ^m film thickness; Supelco, Sig-ma-Aldrich, USA), 260°C injector temperature, 260°C flame ionization detector, 1.0 mL/min He carrier gas were used for GC. Test solutions were heated to and held at 140°C for 5 min, and then the temperature increased to 240° C at a rate of 2°C/min, and held at maximum for 15 min.

Lipids were dissolved in 1-propanol (J.T. Baker, USA) and titrated with 0.1 N KOH to measure acidity. The calorific value of the product was measured with an oxygen bomb calor