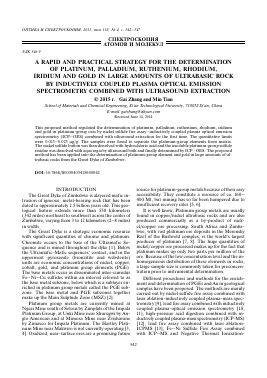 A RAPID AND PRACTICAL STRATEGY FOR THE DETERMINATION

This proposed method regulated the determination of platinum, palladium, ruthenium, rhodium, iridium and gold in platinum-group ores by nickel sulfide fire assay-inductively coupled plasma optical emission spectrometry (ICP-OES) combined with ultrasound extraction for the first time. The quantitative limits were 0.013-0.023 ^g/g. The samples were fused to separate the platinum-group elements from matrix. The nickel sulfide button was then dissolved with hydrochloric acid and the insoluble platinum-group sulfide residue was dissolved with aqua regia by ultrasound bath and finally determined by ICP-OES. The proposed method has been applied into the determination of platinum-group element and gold in large amounts of ultrabasic rocks from the Great Dyke of Zimbabwe.

The Great Dyke of Zimbabwe is alayered mafic intrusion of igneous, metal-bearing rock that has been dated to approximately 2.5 billion years old. This geological feature extends more than 550 kilometers (342 miles) northeast to southwest across the center of Zimbabwe, varying from 3 to 12 kilometers (2—8 miles) in width.

The Great Dyke is a strategic economic resource with significant quantities of chrome and platinum. Chromite occurs to the base of the Ultramafic Sequence and is mined throughout the dyke [1]. Below the Ultramafic-Mafic sequences' contact, and in the uppermost pyroxenite (bronzitite and websterite) units are economic concentrations of nickel, copper, cobalt, gold, and platinum group elements (PGE). The base metals occur as disseminated inter-cumulus Fe—Ni—Cu sulfides within an interval referred to as the base metal subzone, below which is a sublayer enriched in platinum group metals called the PGE subzone. The base metal and PGE subzones together make up the Main Sulphide Zone (MSZ) [2].

Platinum group metals are currently mined at Ngezi Mine south of Selous by Zimplats of the Impala Platinum Group, at Unki Mine near Shurugwi by Anglo American and at Mimosa Mine near Zvishavane by Zimasco for Impala Platinum. The Hartley Platinum Mine near Makwiro is not currently operating [3, 4]. Oxidized, near-surface ores are a promising future

source for platinum-group metals because of their easy accessibility. They constitute a resource of ca. 160— 400 Mt, but mining has so far been hampered due to insufficient recovery rates [5, 6].

It is well know, Platinum group metals are usually found in copper/nickel ultrabasic rocks and are also produced commercially as a by-product of nickel/copper ore processing. South Africa and Zimbabwe, with vast platinum ore deposits in the Merensky Reef of the Bushveld complex, is the world's largest producer of platinum [7, 8]. The huge quantities of nickel/copper ore processed makes up for the fact that platinum makes up only two parts per million of the ore. Because of the low concentration level and the in-homogeneous distribution of these elements in rocks, a large sample size is commonly taken for preconcen-tration prior to instrumental determination.

In these methods, the main enrichment step include nickel sulfide fire assay and lead fire assay. Lead fire assay was widely used as an effective enrichment way of gold, palladium and platinum. However, the enrichment ability for ruthenium, rhodium and iridium were not good [21]. Nickel sulfide fire assay (NiS-FA) method coupled with tellurium coprecipi-tation has been widely applied for determining gold and PGEs in geological samples. NiS-FA gained popularity as a preconcentration method for the determination of gold and PGE. NiS-FA allows for the use of a large sample size. Sample sizes, used by different laboratories, range from 10 to 50 g.

The main ways of detection are combined with ICP—OES and ICP-MS. Basically, the sample introduction system and plasma of ICP—OES and ICP-MS look similar. In ICP—OES, the optical spectrum with a typical range of 165—800 nm is viewed and measured, either sequentially or simultaneously. The simultaneous ICP—OES can be faster for a large numbers of elements, but more expensive, than sequential ICP—OES.

For routine analyses, ICP—OES has matured in automation to the point where relatively unskilled personnel can use methods created by the ICP—OES specialist, similar in ease of use as flame atomic absorption spectrometry (AAS). Until recently, ICP—MS was still the domain of the specialist chemist making fine adjustments before performing routine analysis. Recent ICP—OES spectrometers have been able to analyze routinely up to 10% total dissolved solids (TDS) and even up to 30% for simple salt solutions. Although the analysis of 0.5% TDS for ICP—MS may be possible for a limited time-scale, most chemists are happier with 0.2% maximum TDS. The short-term (in-run) precision of ICP-MS is generally 1—3%. This is improved routinely by use of multiple internal standards. The longer term precision (over a period of hours) is still <5% relative standard difference (RSD). The use of isotope dilution can give results of very high precision and accuracy, although the cost can be prohibitive for routine analysis, due to the cost of the standards. ICP—OES has generally in-run precision of 0.3—2% RSD and again less than 3% RSD over several hours (for some spectrometers <1% for 4 hours). According to the above, ICP—OES was adopted to the route analysis for the large amount of rocks.

In this work, a rapid and practical strategy for the determination of platinum, palladium, ruthenium, rhodium, iridium and gold by ICP—OES combined with nickel sulfide fire assay and ultrasound-assisted

extraction was reported firstly. Gold and PGE were enriched into a NiS button by nickel sulphide fire assay. The button was dissolved by HCl and then Te was used to coprecipitate the dissolved gold and PGE. Finally, the separated gold and PGE by filtration were extracted with aqua regia by ultrasound wave and determined by ICP—OES. Comparing the conventional heating extraction, ultrasound wave extraction not only could effectively escape the loss of the solution volume in the extraction process, but also could reduce the time of extraction. Moreover, the method by ICP— OES has wider linear range, better precision, better toleration of (TDS) and lower cost compared to ICP-MS. The proposed method has been applied into the determination of platinum-group element and gold in large amounts of ultrabasic rocks from the Great Dyke of Zimbabwe.

SnCl2 solution of 1 mol/L in 6 mol/L HCl was prepared from analytical-grade SnCl2 • 2H2O. All solutions were prepared in pure water (distilled and passed through a Milli-Q water purification system from Mil-lipore, Milford, MA, USA).

The preparation of single element stock standard solution: (1) platinum and palladium standard solution: 0.1000 g spectrograde platinum, palladium metal was accurately weighed into a 100 mL beaker. 20 mL aqua regia was added to the beaker and heated on a hotplate to dissolve. 0.2 g NaCl was added into the solution that was then evaporated to dry in boiling-water bath. The HNO3 was removed by adding (2 + 1)