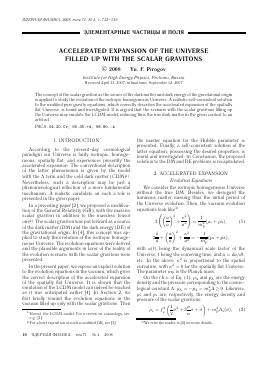 ACCELERATED EXPANSION OF THE UNIVERSE FILLED UP WITH THE SCALAR GRAVITONS

The concept of the scalar graviton as the source of the dark matter and dark energy of the gravitaional origin is applied to study the evolution of the isotropic homogeneous Universe. A realistic self-consistent solution to the modified pure gravity equations, which correctly describes the accelerated expansion of the spatially flat Universe, is found and investigated. It is argued that the scenario with the scalar gravitons filling up the Universe may emulate the LCDM model, reducing thus the true dark matter in the given context to an artefact.

According to the present-day cosmological paradigm our Universe is fairly isotropic, homogeneous, spatially flat, and experiences presently the accelerated expansion. The conventional description of the latter phenomenon is given by the model with the A term and the cold dark matter (CDM)1). Nevertheless, such a description may be just a phenomenological reflection of a more fundamental mechanism. A realistic candidate on such a role is presented in the given paper.

In the present paper, we expose an explicit solution to the evolution equations in the vacuum, which gives the correct description of the accelerated expansion of the spatially flat Universe. It is shown that the emulation of the LCDM model can indeed be reached as it was anticipated earlier [4]. In Section 2, we first briefly remind the evolution equations in the vacuum filled up only with the scalar gravitons. Then

1)Hereof, the LCDM model. For a review on cosmology, see,

the master equation for the Hubble parameter is presented. Finally, a self-consistent solution of the latter equation, possessing the desired properties, is found and investigated. In Conclusion, the proposed solution to the DM and DE problems is recapitulated.

We consider the isotropic homogeneous Universe without the true DM. Besides, we disregard the luminous matter missing thus the initial period of the Universe evolution. Then, the vacuum evolution equations look like3)

with a(t) being the dynamical scale factor of the Universe, t being the comoving time, and a = da/dt, etc. In the above, k2 is proportional to the spatial curvature, with k2 = 0 for the spatially flat Universe. The parameter mP is the Planck mass.

Here, fs = O(mP) is a constant with the dimension of mass entering the kinetic term of the scalar graviton field a. The latter in the given context looks like

with a(t) being a nondynamical scale factor given a priori. The a field is defined up to an additive constant. Without any loss of generality, we can fix the constant by the asymptotic condition: a(t) ^ 0 at t Besides, As(a) is defined through

where Vs(a) is the scalar graviton potential. More particularly, we put

where it is to be understood

with ao being a constant, fs(a — a0) being the physical field of the scalar graviton, and ms being the mass of the latter. By their nature, As and A are quite similar. To make the division onto these two parts unambiguous we normalize As by an additive constant so that As (0) = 0. Clearly, we get from Eq. (2) that ps + ps = f^o2. Here, the contribution of As exactly cancels what is quite similar to the relation Pa + pA = 0. So, the contribution of As is a kind of the DE. In what follows, we put a0 = 0 and V0 = mpA, with a ^ 0 at t ^ro becoming the ground state.

The nondynamical functions Vs and a being the two characteristics of the vacuum are not quite independent. More particularly, adopting the isotropic homogeneous ansatz for the solution of the gravity equations, with only one dynamical variable a, we tacitly put a consistency relation between aa and Vs. As a result, only one combination of the two equations of (1) is the true equation of evolution, with the second independent combination giving just the required consistency condition.

In what follows, we restrict ourselves by the case of the spatially flat Universe, k = 0. Subtracting the first equation of (1) from the second one and accounting for Eq. (2) we get the relation

tions (8) and (6) supersede the pair of the original evolution equations (1).

Let us put in what follows As = 0. This will be justified afterwards. Iterating Eq. (8), with A considered as a perturbation, we can get the solution with any desired accuracy. In particular, substituting into the r.h.s. of Eq. (8) the solution H = a/t from the zeroth approximation (A = 0) we get the first approximation as follows:

being the characteristic time of the evolution of the Universe. Numerically, ta ~ 10 Gyr is of the order of the Universe age. Equation (11) is the basis for the qualitative discussion in what follows.

Integrating Eq. (11) we get the scale factor as follows:

ACCELERATED EXPANSION OF THE UNIVERSE

where a0 is an integration constant4). Explicitly, the scale factor looks like

with tA bordering thus the epoch of the power-law expansion from the epoch of the exponential expansion. Equation (13) gives the two-parametric representation for the scale factor of the acceleratedly expanding Universe after the initial period.

With account for Eq. (9) the a field behaves as

Note that at tA ^œ or, equivalently, A ^ 0 the integral above diverges and the a field cannot be normalized properly. A =0 is thus necessary as a regulator in the theory. Now, the consistency condition looks like

Clearly, A should be already presupposed in a. Note that in the case a = 2/3, the parameter a is approximately constant at t/tA < 1.

Substituting Eqs. (11) and (6) into the first equation of (2) we can explicitly verify that

4)To phenomenologically account for the effect of the initial inflation we could formally shift the origin of time: t ^ t + t0, with to > 0.

At the same conditions as before, this is ps/mP = = -A/2, being near constant (though nonzero as it would be anticipated for the true CDM). Nevertheless, we see that the value a = 2/3 is exceptional in many respects. Conceivably, such a value is distinguished by a more fundamental theory.

Introducing the critical energy density pc = = 3mPH2, we get for the partial energy densities Qs = ps/pc and Qa = pA/pc, respectively, of the scalar gravitons and the A term the following:

Finally, the condition As = 0 adopted earlier can be justified as follows. First of all, As is indeed negligible at t ^^ due to a ^ 0 and As(0) = 0. On the other hand, at t ~ tA we have |a|~ 1 and, hence, As ~ m2. For As to be negligible in this region too, we should require ms < VX ~ l/tA. Nevertheless, in the early period of evolution when |a| > 1 the contribution of As may be significant. The parameter a = 2/3 being fixed, the theory may be terminated just by two mass parameters: the ultraviolet mp and the infrared ¿71 ~ \/A or, otherwise, ms.

To conclude, let us recapitulate the proposed solution