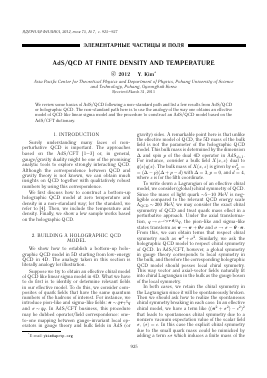 AdS/QCD AT FINITE DENSITY AND TEMPERATURE

We review some basics of AdS/QCD following a non-standard path and list a few results from AdS/QCD or holographic QCD. The non-standard path here is to use the analogy of the way one obtains an effective model of QCD like linear sigma model and the procedure to construct an AdS/QCD model based on the AdS/CFT dictionary.

Surely understanding many faces of non-perturbative QCD is important. The approaches based on the AdS/CFT [1—3] or, in general, gauge/gravity duality might be one of the promising analytic tools to explore strongly interacting QCD. Although the correspondence between QCD and gravity theory is not known, we can obtain much insights on QCD together with qualitatively robust numbers by using this correspondence.

We show how to establish a bottom-up holographic QCD model in 5D starting from low-energy QCD in 4D. The analogy taken in this section is literally analogy for illustration.

Suppose we try to obtain an effective chiral model of QCD like linear sigma model in 4D. What we have to do first is to identify or determine relevant fields in our effective model. To do this, we consider composites of quark fields that have the same quantum numbers of the hadrons of interest. For instance, we introduce pion-like and sigma-like fields: n ~ qrY5q and a ~ qq. In AdS/CFT business, this procedure may be dubbed operator/field correspondence: one-to-one mapping between gauge-invariant local operators in gauge theory and bulk fields in AdS (or

pion, — e/c. In a holographic QCD model, the chiral symmetry breaking is encoded in the vacuum expectation value of a bulk scalar field dual to qq. For instance, in the hard-wall model [5, 6], it is given by (X) = mqz + (z3, where mq and ( are proportional to the quark mass and chiral condensate in QCD.

A huge difference between the two approaches is the background metric. In the effective chiral model, the metric is flat in 4D, while it is curved in the holographic QCD model with extra dimensions. For instance, in the hard-wall model, the background, AdS, is given by

where f (z) = 1 — zdfzfi. The temperature of the boundary gauge theory is identified as T = d/(4nzh). It seems that it is a piece of cake to deal with temperature in holographic QCD. However, it is not true at least in confined phase.

In holographic QCD, the confinement-to-de-confinement phase transition is described by the Hawking—Page transition. In low-temperature confined phase, thermal AdS, which is nothing but the AdS metric in Euclidean space, dominates the partition function, while at high temperature, AdS-black-hole geometry does. This was first discovered in the finite volume boundary case in [7]. In the bottom-up model, it is shown that the same phenomena happen also for infinite boundary volume if there is a finite scale along the fifth direction [8]. Due to this Hawking—Page transition, we are not to use the black hole in the confined phase and so are not to obtain the temperature dependence of any hadronic observables. This might be ok with large-Nc QCD as long as we don't consider any large-Nc corrections. But in reality we observe temperature dependence of hadronic quantities, and therefore we need to include large-Nc corrections in holographic QCD in a consistent way. A quick fix-up for this might be to

use the temperature-dependent chiral condensate as an input in the hard-wall model and study how this temperature dependence conveys into other hadronic quantities like the pion decay constant [9].

Now we move on to dense matter. For this, we introduce an AdS/CFT dictionary. Suppose we have a term like J" d4xJ • O. Then we will have a bulk field 0 dual to O. The AdS/CFT dictionary dictates that the source term J is nothing but the boundary (z ^ 0) value of 0o, where 0o is the solution of the classical equation of motion of the bulk field. According to this, a chemical potential in boundary gauge theory is encoded in the boundary value of the time component of the 5D bulk U(1) gauge field. To be more specific on this, we first consider the chemical potential term in gauge theory,

In this section we show how to extend the holographic QCD model to finite temperature and density with a few sample works. Here, we discuss mainly a bottom-up approach such as the hard-wall model.

The finite temperature could be neatly introduced by a black hole in AdS^+i,where d is the dimension of the boundary gauge theory. The background is given by

Then, we introduce a bulk U(1) gauge field A^ which is dual to qY^q. According to the dictionary, we have At(z ^ 0) ~ iq. This procedure is also applicable to the quark mass discussed in the previous section. In the hard-wall model, the solution of the bulk vector field is given by

where i and p are related quark chemical potential and quark (or baryon) number density in QCD.

There are huge number of works on holographic QCD at finite temperature and/or density. Due to limitation in space, we give only one example here. In [10], self-bound dense objects are studied in the hard-wall model. By studying classical equation of motion for the time component bulk U(1) gauge field and a scalar field dual to qq, they obtain density distribution and chiral condensate variation along the radial direction of the boundary gauge theory. Their results were applied to the density distribution in nuclei to reach a conclusion that the confinement scale might change from a free nucleon —300 MeV to a nucleus -100 MeV.

Y.K. thanks the organizers of the 6th International Workshop on "Critical Point and Onset of Deconfine-ment" held at Joint Institute for Nuclear Research, Dubna. Y.K. acknowledges the Max Planck Society (MPG), the Korea Ministry of Education, Science and Technology (MEST), Gyeongsangbuk-Do and Pohang City for the support of the Independent Junior Research Group at the Asia Pacific Center for Theoretical Physics (APCTP).