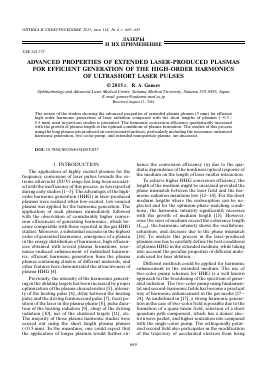 The review of the studies showing the advanced properties of extended plasma plumes (5 mm) for efficient high-order harmonic generation of laser radiation compared with the short lengths of plasmas (~0.3— 0.5 mm) used in previous studies is presented. The harmonic conversion efficiency quadratically increased with the growth of plasma length at the optimal conditions of plasma formation. The studies of this process using the long plasma jets produced on various metal surfaces, particularly including the resonance-enhanced harmonic generation, two-color pump, and extended nanoparticle plasma, are discussed.

The application of highly excited plasmas for the frequency conversion of laser pulses towards the extreme ultraviolet (XUV) range has long been associated with the inefficiency of this process, as was reported during early studies [1—3]. The advantages of the highorder harmonic generation (HHG) in laser-produced plasmas were realized when low-excited, low-ionized plasma was applied for the harmonic generation. The application of such plasmas immediately followed with the observation of considerably higher conversion efficiencies of generating harmonics, which became comparable with those reported in the gas HHG studies. Moreover, a substantial increase in the highest order of generated harmonics, emergence of a plateau in the energy distribution of harmonics, high efficiencies obtained with several plasma formations, resonance-induced enhancement of individual harmonics, efficient harmonic generation from the plasma plumes containing clusters of different materials, and other features have demonstrated the attractiveness of plasma HHG [4].

Previously, the intensity of the harmonics generating in the ablating targets has been increased by proper optimization of the plasma characteristics [5], intensity of the heating pulse [6], delay between the heating pulse and the driving femtosecond pulse [7], focal position of the laser in the plasma plume [8], pulse duration of the heating radiation [9], chirp of the driving radiation [10], use of the clustered targets [11], etc. The majority of those plasma harmonic studies were carried out using the short length plasma plumes (<0.5 mm). In the meantime, one could expect that the application of longer plasmas would further en-

hance the conversion efficiency (n) due to the quadratic dependence of the nonlinear optical response of the medium on the length of laser-matter interaction.

To achieve higher HHG conversion efficiency, the length of the medium might be increased provided the phase mismatch between the laser field and the harmonic radiation maintains low [12—14]. For the short medium lengths where the reabsorption can be neglected and for the optimum phase-matching conditions, the harmonic intensity significantly increases with the growth of medium length [15]. However, once the sizes of medium exceed the coherence length (Lcoh), the harmonic intensity shows the oscillations, saturation, and decrease due to the phase mismatch [16]. To analyze this process in the laser-produced plasmas one has to carefully define the best conditions of plasma HHG in the extended medium, while taking into account the peculiar properties of different materials used for laser ablation.

Different methods could be applied for harmonic enhancement in the extended medium. The use of two-color pump schemes for HHG is a well known approach for the broadening of the spectrum of generated radiation. The two-color pump using fundamental and second-harmonic fields has become a practical way of harmonic enhancement in the gas media [17— 24]. As underlined in [17], a strong harmonic generation in the case of two-color field is possible due to the formation of a quasi-linear field, selection of a short quantum path component, which has a denser electron wave packet, and higher ionization rate compared with the single-color pump. The orthogonally polarized second field also participates in the modification of the trajectory of accelerated electron from being

two-dimensional to three-dimensional. With suitable control of the relative phase between the fundamental and second harmonic field, the latter field enhances the short path contribution while diminishing other electron paths, resulting in a clean high-order harmonic spectrum. This approach has been applied for plasma harmonic generation as well. In [25], the first observation of an increase in the n of harmonic from the narrow (~0.3 mm-long) plasma plumes irradiated by an intense two-color femtosecond laser beam, wherein the fundamental field and its weak second harmonic (at the energy ratio of 50:1) were linearly polarized orthogonal to each other, was reported. At the same time, no proper monitoring of this process at different rates of overlapping of the two pumps in the extended plasma medium was carried out until recent time. Notice that application of extended plasma at these conditions of excitation may offer some attractive peculiarities related with better matching of the two pump waves.

Another method that has been explored to increase the n of HHG is the use of clusters as the nonlinear media. The harmonic enhancement using the gaseous clusters was reported in [26—29]. The increase of n was attributed to the growth of the concentration of emitters and the specific properties of clusters. The cross-section of recombination of the accelerated electron with the parent particle in the case of clusters is higher compared with the atoms [29]. In the meantime, the uncertainty in the exact mechanism of the HHG from clusters has previously been underlined in a few studies [29—31]. Among additional mechanisms the ionization and recombination to the same ion, to the neighboring ions, and to the whole nanoparticle have been proposed. The experiments with gas clusters have revealed some difficulties in disentangling the harmonics produced by different species (monomers and clusters of different sizes). In the meantime, the comparative studies of HHG in the laser-produced plasma plumes consisted of metal clusters and monomers have shown that, at equal experimental conditions, the former emitters provide stronger harmonic yield, thus pointing out the specific advanced properties of the nanoparticle emitters of harmonics [11, 32—34]. The availability of various metal nanoparticles in the market allowed formation of the plasmas containing small clusters of different elements. This followed with the enhancement of the harmonics generating in the metal cluster plasmas. It was pointed out the importance of the involvement of such clusters for the HHG, while no suggestions were presented about the optimal shape and structure of those species, as well as the sizes of nanoparticle-containing plasmas.

In this connection, clustered carbon species provide a variety of morphological shapes (such as spherical nanoparticles and fullerenes, as well as extended nanofibers and nanotubes), contrary to the less variable shapes of metal nanoparticles. The use of former clusters in the HHG studies has attracted the attention

long time ago. The HHG spectra of carbon nanotubes (CNTs) have been theoretically studied in [35—39]. It was suggested that there are many reasons for using the nanotubes to generate high-order harmonics. The CNT targets lack a number of serious drawbacks, which are characteristic of the molecular targets. The chemical bonding between carbon atoms in nanotubes and carbon nanofibers (CNF) is rather strong, which means that their deformation and dissociation in intense fields take place during longer time scales than that of aromatic molecules. The lack of light hydrogen atoms in nanotubes and nanofibers contributes to the same stability effect. The spectra of harmonics may provide useful information on the dynamics of electron motion in such extended structures. Finally, the pronounced electronic nonlinearity in CNTs and CNFs with the two-dimensional confined distribution on their surfaces shows some potential for the efficient generation of high-order harmonics and could thus represent a useful method for producing the coherent ultrashort XUV pulses. The advanced properties of CNTs were revealed during the first experimental demonstration of their high-order nonlinear optical properties [40], which has shown the harmonic yield exceeding those obtained using other ablated species. Similarly, various peculiarities have been identified in the theoretical studies of HHG from the C60 fullerenes [41—45]. Compared to laser-atom interaction, in large molecules or clusters, such as C60, additional degrees of freedom are introduced, particularly electronic degrees of freedom, including collective effects such as the formation of plasmons, and vibrational degrees of freedom. The importance of 20 eV giant broadband resonance of C60 for the simultaneous enhancement of a few neighboring harmonics within the bandwidth of this resonance was confirmed during first experimental demonstration of the fullerene-induced HHG [46]. The use of carbon cluster-contained extended media can further increase the yield of harmonics.

It has been suggested that the nanoparticle formation during ablation of bulk graphite was the main reason of the observed enhanced yield of harmonic radiation from the plasmas containing carbon species [47, 48]. The physical and morphological characteristics of those plasmas, such as presence of clusters, directly affect the harmonic yield. It is unclear whether