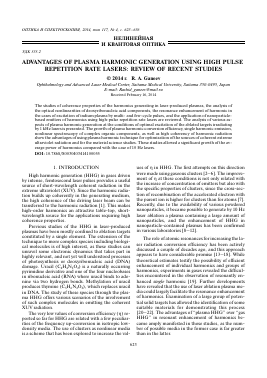 The studies of coherence properties of the harmonics generating in laser-produced plasmas, the analysis of the optical nonlinearities of deoxyribonucleic acid components, the resonance enhancement of harmonic in the cases of excitation of indium plasma by multi- and few-cycle pulses, and the application of nanoparticle-based emitters of harmonics using high-pulse repetition rate lasers are reviewed. The analysis of various aspects of plasma harmonic generation at the conditions of optimal excitation of the ablated targets irradiating by 1 kHz lasers is presented. The growth of plasma harmonic conversion efficiency, single harmonic emission, nonlinear spectroscopy of complex organic components, as well as high coherency of harmonic radiation show the advantages of using plasma harmonic technique for optimization of the sources of coherent extreme ultraviolet radiation and for the material science studies. These studies allowed a significant growth of the average power of harmonics compared with the case of 10 Hz lasers.

High harmonic generation (HHG) in gases driven by intense, femtosecond laser pulses provides a useful source of short-wavelength coherent radiation in the extreme ultraviolet (XUV). Since the harmonic radiation builds up coherently in the generating medium, the high coherence of the driving laser beam can be transferred to the harmonic radiation [1]. This makes high-order harmonics an attractive table-top, short-wavelength source for the applications requiring high coherence properties.

Previous studies of the HHG in laser-produced plasmas have been mostly confined to ablation targets constituted by a single element. The extension of the technique to more complex species including biological molecules is of high interest, as these studies can unravel some electronic dynamics that takes part in highly relevant, and not yet well understood processes of photosynthesis or deoxyribonucleic acid (DNA) damage. Uracil (C4H4N2O2) is a naturally occurring pyrimidine derivative and one of the four nucleobases in ribonucleic acid (RNA) where uracil binds to adenine via two hydrogen bonds. Methylation of uracil produces thymine (C5H6N2O2), which replaces uracil in DNA. The study of these species through the plasma HHG offers various scenarios of the involvement of such complex molecules in emitting the coherent XUV radiation.

The very low values of conversion efficiency (n) reported so far for HHG are related with a few peculiarities of the frequency up-conversion in isotropic low-density media. The use of clusters as nonlinear media is a scheme that has been explored to increase the val-

ues of n in HHG. The first attempts on this direction were made using gaseous clusters [2—6]. The improvement of n at these conditions is not only related with the increase of concentration of emitters but also with the specific properties of clusters, since the cross-section of recombination of the accelerated electron with the parent ion is higher for clusters than for atoms [7]. Recently, due to the availability of various powdered nanoparticles, it became possible to generate by 10 Hz laser ablation a plasma containing a large amount of nanoparticles, and the enhancement of HHG in nanoparticle-contained plasmas has been confirmed in various laboratories [8—12].

The role of atomic resonances for increasing the laser radiation conversion efficiency has been actively discussed a couple of decades ago, and this approach appears to have considerable promise [13—18]. While theoretical estimates testify the possibility of efficient enhancement of individual harmonics and groups of harmonics, experiments in gases revealed the difficulties encountered in the observation of resonantly enhanced single harmonic [19]. Further developments have revealed that the use of laser ablation plasma media could largely facilitate the resonance enhancement of harmonics. Examination of a large group of potential solid targets has allowed the identification of some suitable materials for demonstrating this process [20—22]. The advantages of "plasma HHG" over "gas HHG" in resonant enhancement of harmonics became amply manifested in those studies, as the number of possible media in the former case is far greater than in the latter.

Notice that most of plasma HHG studies were carried out using low (10 Hz) pulse repetition rate lasers. Use of 1 kHz lasers allows the 100-fold growth of the average power ofgenerating harmonics compared with the 10 Hz lasers. Some aspects of application of the high pulse repetition rate lasers for plasma HHG have been discussed in [23]. Below we review most recent studies of the plasma harmonics using high pulse repetition rate lasers. Among the topics for discussion are the measurements of the coherence of plasma harmonics, the application of ablated nanoparticles for harmonic enhancement, the resonance-induced growth of single harmonic yield using few cycle pulses, and the ablation-induced HHG spectroscopy of DNA components.

2. METHODS FOR ANALYSIS OF THE PLASMA HHG USING 1 KHZ LASERS

The experimental set-up of these studies is shown

Produktions GmbH) was used for these studies, which provides pulses of 30 fs duration and energies of up to

2.5 mJ at a repetition rate of 1 kHz. These pulses were

on. The spectrally broadened pulses at the output of

the fibre system were compressed by 10 bounces of

energy 120 J pulse duration 8 ps, pulse repetition rate 1 kHz) was split from the beam line prior to the laser compressor stage and was directed into the vacuum chamber to create an ablation plume from the target. These heating picosecond pulses were focused by a 400 mm focal length lens to an intensity on the target surface of Ips ~ 8 x 109 W cm-2. The length and density

of the ablation plume were estimated to be ~0.5 mm

and ~3 x 1017 cm-3, respectively. The 15-mm diameter rods of various materials, which were rotated at 30 rotations per minute (rpm), were used for laser ablation. Rotating targets considerably improve the stability of harmonics compared with fixed targets in the case of high pulse repetition rate. In particular, it was shown that once the target rotation is stopped, the harmonic efficiency from the plasmas decreased for more than one order of magnitude within a few seconds [25]. Harmonics were generated with 4 fs laser pulses which were focused into the ablation plumes using a 700 mm focal length spherical mirror. The delay between the heating picosecond pulse and the driving femtosecond pulse was set to 33 ns. The focal position of the driving femtosecond pulse with respect to the ablation plume was chosen to maximize the harmonic signal, and the intensity in the ablation plume was estimated to be Ifs ~ ~ 3 x 1014 W cm-2. This estimate is consistent with the 70 eV high-order harmonic cut-off observed in neon.

A 1 kHz chirped pulse amplification (CPA) Ti:sap-phire laser (Red Dragon, KML Inc.) was also used as the main laser driving source with longer pulse duration. Part of the uncompressed CPA radiation (780 nm, 1.3 mJ, 160 ps) was split off from the beam line prior to the compressor stage and used for ablation of the targets placed in a vacuum chamber. This heating beam was loosely focused onto the target with a spot size ofabout 0.4 mm. The resulting intensity on the target surface, in the range of 6 x 109-2 x 1010 W cm-2, created a weakly ionized plasma plume. After a delay of ~40 ns, required for formation and expansion of the plume away from the surface of the target, the compressed driving pulse (780 nm, 1 mJ, 30 fs) was focused onto the plasma using a 200 mm focal length mirror at an intensity of 4 x 1014 W cm-2 to generate the highorder harmonics.

Various targets to ablate and create the plasma were used as a nonlinear optical media for HHG. The details on each target will be presented in the following sections. The harmonics were analyzed using a spatial-

ly-resolving XUV spectrometer with a grazing incidence flat-field grating (1200 lines/mm, Hitachi) and an imaging micro-channel plate (MCP) detector (Photonis USA, Inc.) coupled to a phosphor screen. The spatially resolved spectra of the generated harmonics were observed on the phosphor screen and recorded with a CCD camera.