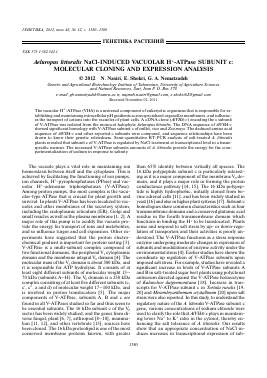 The vacuolar H+-ATPase (VHA) is a universal component of eukaryotic organisms that is responsible for establishing and maintaining intracellular pH gradients across specialized organellar membranes, and influences the transport of cations into the vacuoles of plant cells. A cDNA clone (AlVHA-c) encoding the c subunit of V-ATPase was isolated from the monocot halophyte Aeluropus littoralis. The DNA sequence of AlVHA-c showed significant homology with V-ATPase subunit c of millet, rice and Zea mays. The deduced amino acid sequence of AlVHA-c and other reported c subunits were compared, and sequence relationships have been drawn to know their genetic relatedness. Semi-quantitative RT-PCR analysis of salt-treated A. littoralis plants revealed that subunit c of V-ATPase is regulated by NaCl treatment at transcriptional level in a tissue-specific manner. The increased V-ATPase subunits amounts of A. littoralis provide the energy for the com-partmentalization of sodium in response to salinity.

The vacuole plays a vital role in maintaining ion homeostasis between itself and the cytoplasm. This is achieved by facilitating the functioning of ion pumps, ion channels, H+-pyrophosphatases (PPase) and vacuolar H+-adenosine triphosphatases (V-ATPase). Among proton pumps, the most complex is the vacu-olar-type ATPase that is crucial for plant growth and survival. In plants V-ATPase has been localized to vacuoles and other membranes of the secretory system, including the endoplasmic reticulum (ER), Golgi and small vesicles as well as the plasma membrane [1, 2]. A major role of this pump is to acidify the vacuole provide the energy for transport of ions and metabolites, and so influence turgor and cell expansion. Other experiments have suggested that the proton electrochemical gradient is important for protein sorting [3]. V-ATPase is a multi-subunit complex composed of two functional domains, the peripheral V1 cytoplasmic domain and the membrane integral V0 domain [4]. The molecular mass of the V1 domain is about 500 kDa, and it is responsible for ATP hydrolysis. It consists of at least eight different subunits of molecular weight 13— 70 kDa (subunits A—H). The V0 domain is a 250 kDa complex consisting of at least five different subunits (c, c', c'', a and d) of molecular weight 17—100 kDa, and is involved in proton translocation [5]. The major components of V-ATPase, subunits A, B and c are found in all V-ATPases studied so far and thus seem to be essential subunits. The 16 kDa subunit c of the V0 sector has been widely studied, and the genes from diverse fungal, plant [6, 7], arthropod [8—10], mammalian [11, 12], and other vertebrate [13], sources have been cloned. The 16 kDa proteolipid is one of the most conserved membrane proteins known, with greater

than 65% identity between virtually all species. The 16 kDa polypeptide subunit c is particularly interesting as it is a major component of the membrane V0 domain, and it plays a major role in forming the proton conductance pathway [14, 15]. The 16 kDa polypeptide is highly hydrophobic, initially cloned from bovine adrenal cells [11], and has been widely studied in yeast [16] and also in higher plant systems [17]. Subunit c homologues share common characteristics such as four transmembrane domains and a conserved glutamic acid residue in the fourth transmembrane domain which functions in binding the H+ to be translocated. Plants sense and respond to salt stress by up- or down-regulation of transporters and their activities is poorly understood. The V-ATPase functions as a stress response enzyme undergoing moderate changes in expression of subunits and modulations of enzyme activity under the environmental stress [4]. Earlier studies have shown the coordinate up regulation of V-ATPase subunits upon imposed salt stress. For example, studies have revealed a significant increase in levels of V-ATPase subunits A and B in salt-treated sugar beet plants using polyclonal antiserum directed against the V-ATPase holoenzyme of Kalanchoe daigremontiana [18]. Increase in transcripts for V-ATPase subunit c in Tortula ruralis [19, 20] and Mesembryanthemum crystallinum [20] upon salt stress were also reported. In this study, to understand the regulatory nature of the A. littoralis V-ATPase subunit c gene, various concentrations of sodium chloride were used to clarify the role that AlVHA-c plays in maintaining lower Na+ to K+ ratio in the cytosol, thereby enhancing the salt tolerance of A. littoralis. Our results show that an appropriate concentration of NaCl induces increases in transcriptional expression of sub-

Plant sample preparation & treatments. Seeds of halophyte plant A. littoralis (collected from the Province Mazandaran, Iran) were germinated in acid-washed sand. Seedlings were irrigated daily with half-strength Hoagland nutrient solution according to evaporation demand. Plants were grown in a greenhouse with a daily temperature of 25—28°C, relative humidity of 60—70% and a 14-h photoperiod at 8001000 |mol photons m-2 s-1 of photo synthetically active radiation. Six-week-old seedlings were treated with 0 (control), 200 and 400 mmol/L NaCl. The final salinity level was achieved by raising 100 mmol/L NaCl every 24 h in order to avoid osmotic shock. Plant samples (shoot & root) were taken for analysis two months after salt exposure.

Na+ andK+ determination. The shoots of the plants were rinsed with deionized water three times and then dried at 80°C to a constant weight after filtration with Whatman paper. A total of 0.1 g dry powder samples were then extracted with 5ml 4 M HCl at 37°C overnight to release the free cations and centrifuged at 10,000 g for 10 min. The resulting supernatants of the extracts were diluted and Na+ and K+ were determined with a Shimadzu AA-680 atomic absorption/flame spectrophotometer.

Semi-quantitative RT-PCR. Oligonucleotide primers (5'-ATGTCGTCGGTGTTCAGC-3' & 5-CG-TAGATACCGAGCACAC- 3'), corresponding to the highly conserved amino acid sequence of diverse genes obtained from GenBank were synthesized. Total RNA samples were isolated from different parts of the plant including shoot and root using TRIZOL reagents (In-vitrogen, Inc.,CA,USA) and exposure to RNase free DNaseI treatment according to Fermentas procedure. Single strand cDNA was then obtained using 1 |g of total RNA and oligo (dT) primers, with the RevertAid Reverse Transcriptase System (Fermentas) for RT-PCR. After RT, cDNA was amplified for 19 cycles (94°C - 45 s, 50.3°C - 45 s, and 72°C - 90 s), which was determined to be within the linear range of amplification. For equal loading of the first standard cDNA in RT-PCR reaction, the concentration must be adjusted according to an internal control gene, so the housekeeping gene p-actin (5'-GTGCCCATTTACGAAG-GATA-3' & 5'-GAAGACTCCATGCCGATCAT-3') was used as a control for variations in the input of RNA. Non transcribed RNAs were also included in each PCR reaction to confirm the absence of genomic DNA. PCR products were loaded and run on a 1.2% agarose gel at 80 V for 60 min using 0.5x TBE buffer and stained with ethidium bromide.

Cloning of AlVHA-c CDS. Oligonucleotides (5'-AT-GTCGTCGGTGTTCAGC-3' & 5'-CTAATC(T/G) GCACG(A/G)GATTG-3'), were used as forward and reverse primers, respectively, to specifically amplify coding sequence (CDS) of AlVHA-c gene. The primers were designed according to nucleic acid alignment of available VHA-c gene sequences from other species using Primer premier v.3.5. Total RNA was extracted as described above. The first strand cDNA was extended using 400 ng of total RNA, 100 pmol of oligo(dT) (18-mer) primer, 200 units of M-MuLV reverse tran-scriptase (Fermentas) plus its reaction buffer, and 0.5 |L of10 mM dNTP mix in a final volume of 20 |L, followed by RNA denaturation at 70°C for 5 min, primer annealing at 37°C for 5 min, cDNA extension at 42°C for 70 min, and enzyme inactivation at 80°C for 10 min. Two microliter ofRT reaction was added to a mixture of 2.5 |L of 10x PCR buffer, 1.25 |L of 50 mM MgCl2, 0.5 |L of 10 mM dNTP mix, 10 pmol of each D6DES gene specific primer, and 1.25 units of Taq DNA polymerase in a 25 |L final volume for PCR amplification. The PCR reactions were carried out using a cycling profile of an initial denaturation at 94°C for 3 min, followed by 35 cycles of denaturation at 94°C for 1 min, annealing at 55°C for 1 min, extension at 72°C for 1 min, and a final extension at 72°C for 6 min. PCR products were stained with ethidium bromide and run on an agarose gel. The amplified DNA fragment was extracted from gel slice using Roche DNA Extraction Kit (K0513) for cloning into plasmid vector. The PCR amplified fragments were cloned into plasmid vector pTZ57R/T using InsTAclone™ PCR Cloning Kit (Fermentas). The resulting recombinant vector, pTZ-AlVHA-c, was introduced to E. coli strain DH5a and recombinant colonies were selected on LB-agar plates containing Ampicillin, X-GAL and IPTG. The recombinant plasmid was isolated from transformed bacteria and the proper cloning of desired fragment was verified through PCR, endonulease cleavage and nucleic acid sequencing experiments.

Cloning and characterization of AlVHA-c gene