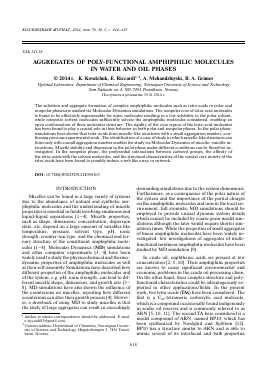 The solvation and aggregate formation of complex amphiphilic molecules such as tetra-acids in polar and nonpolar phases are studied via Molecular Dynamics simulations. The nonpolar core of tetra-acid molecules is found to be effectively impermeable for water molecules resulting in a low solubility in the polar solvent, while nonpolar solvent molecules sufficiently solvate the amphiphilic molecules considered, enabling an open conformation of their molecular structure. The rigidity of the core region of the tetra-acid molecules has been found to play a crucial role in their behavior in both polar and nonpolar phases. In the polar phase, simulations have shown that tetra-acids form micelle-like structures with a small aggregation number, confirming previous experimental work. The identification of a case of study in which micelle-like structures can form only with a small aggregation number enables the study via Molecular Dynamics of micelle—micelle interactions. Micelle stability and dispersion in the polar phase under different conditions can be therefore investigated. In the nonpolar phase, the preferential interactions between carboxyl groups, the affinity of the tetra-acids with the solvent molecules, and the structural characteristics of the central core moiety of the tetra-acids have been found to possibly induce a web like array, or network.

Micelles can be found in a large variety of systems due to the abundance of natural and synthetic amphiphilic molecules and the understanding of micelle properties is essential in fields involving emulsions and liquid-liquid separations [1—4]. Micelle properties, such as shape, dimension, concentration, dispersion state, etc. depend on a large amount of variables like temperature, pressure, solvent type, pH, ionic strength, counter-ion type, and the chemical and ternary structure of the constituent amphiphilic molecules [1—8]. Molecular Dynamics (MD) simulations and other computer experiments [3, 4] have been widely used to study the physicochemical and thermodynamic properties of amphiphilic molecules as well as their self-assembly. Simulations have described how different properties of the amphiphilic molecules and of the system, e.g. pH, ionic strength, can lead to different micelle shape, dimension, and growth rate [3— 8]. MD simulations have also shown the influence of the counterions on micelles, reporting how different counterions can alter their growth process [4]. However, a drawback of using MD to study micelles is that the study of large aggregates can result in exceedingly

1 Author to whom correspondence should be addressed. E-mail: e.riccardi82@gmail.com.

In crude oil, naphthenic acids are present at low concentration [2, 5, 10]. Their amphiphilic properties are known to cause significant environmental and economic problems in the crude oil processing chain. On the other hand, their complex structure and poly-functional characteristics could be advantageously exploited in other applications/fields. In the present work, two tetra-acids (TAs) have been considered. The first is a C80-tetrameric carboxylic acid molecule, which is a compound occasionally found indigenously in acidic oil reserves and is commonly referred to as ARN [5, 10, 11]. The second TA here considered is a model compound of ARN, named BP10, which has been synthesized by Nordgard and Sjoblom [12]. BP10 has a structure similar to ARN and is able to mimic several of its interfacial and bulk properties

[13]. Their difference is mainly in the chemical structure of the central cores, which could potentially generate different aggregate structures. Due to the complex structure of the constituents, such aggregates can differ significantly from aggregates formed by linear amphiphilic molecules in both polar and nonpolar phases. Recently, Ge et al. [14] have investigated self-association properties of fully ionized BP10 in aqueous solution using dynamic light scattering (DLS). Micelles have been detected with diameters in the range between 2 and 6 nm [14—16]. Complementary experiments using small-angle neutron scattering (SANS) were performed by Simon et al. [15] to compare the aggregation of fully ionized ARN and BP10 molecules. For BP10, micelles formed at low salt concentration with aggregation numbers in the range of 4—5; these results were in agreement with the DLS study. At low ionic strengths, ARN had been found to form bigger aggregates than BP10; the large size of these aggregates could not be determined due to the low resolution of the performed SANS measurement. In addition, a clear conclusion about the formation of ARN aggregates could not be formulated due to the excessive presence of impurities that interact with the TAs in the investigated sample altering their behavior [15].

MD simulations have been successfully employed to simulate ARN and BP10 at the interface between a polar and nonpolar solvent [6]. The results consistently showed that such TAs behave differently from common linear amphiphilic molecules at the interface between the solvents. This finding suggested the study of aggregates of these complex molecules in both the bulk polar and nonpolar phases. Therefore, in the present work, MD simulations have been performed to simulate and identify the aggregates that ARN and BP10 can form in polar and nonpolar bulk phases. The main difference between BP10 and ARN is the number of rotational degrees of freedom for the atoms in the central core moieties of the molecules. Specifically, bond rotations for the carbon atoms in the two unsaturated ring structures of the BP10 core are restricted, while all atoms in the ARN core structure have some rotational degrees of freedom. The different accessible conformational space of the core structures result into a different structural rigidity, which should be reasonably considered a determinant in the formation of aggregates. The common similarity of these amphiphilic molecules is their polar head groups located at the extremes of the molecule, and the non-polar or weakly polar section in their core. Such a description of the TA molecules is similar to the description of a micelle given above. In this perspective, the aggregation process of a few TA molecules could, in principle, resemble the micelle aggregation process. If that hypothesis is confirmed, a very small number of molecules would be necessary to form micelle-like structures and possibly aggregates of these structures. Consequently, TA molecules could provide a case of study for a micelle system with a small aggregation number that could be

extremely useful for study by MD simulation. A relatively small number of amphiphilic molecules and solvent molecules would be required to be included in the simulation and less demanding simulations can enable the direct simulation and study of processes such as micelle growth, micelle stability, and micelle aggregation etc. as a function of various system variables of interest. The reduced size of the system would also allow one to maintain the required level of full atomistic resolution to properly consider the effect of partial charges, dipole and quadrupole moments present in the am-phiphilic molecules as well as counterion and solvent molecules.

In the nonpolar phase, amphiphilic molecules are known to form, in suitable conditions, inverse micelles [1]. However, the dimension of the non-polar central core is expected to play a predominant role dictating the properties of these amphiphilic molecules in the bulk nonpolar phase. It appears unlikely to observe the formation of compact aggregates. On the other hand, due to the affinity of the polar sites of the amphiphilic groups, super molecular structures could be generated in the oil phase. Therefore, the TA behaviors, and their mutual interactions, have also been investigated in the present work, via MD, in a nonpolar solvent.

Molecular Dynamics simulation in full atomistic resolution has been employed to simulate ARN and BP10 tetra-acids. The molecules have been simulated according to the OPLS-AA force field [17] in their protonated (uncharged) and deprotonated (charged) states. OPLS-AA has been developed by fitting the experimental properties of liquids, and it includes all the intra- and inter-molecular interaction potentials and parameters for the molecules here considered. In the charged state, electroneutrality has been guaranteed by four sodium counter-ions, Na+, for each TA molecule to compensate the charges of the deprotonated carboxyl groups. The counter-ion has been modeled as a single charged particle according to the OPLS-AA force field with a + 1 net charge located in the center of the bead. The TA molecules have been simulated