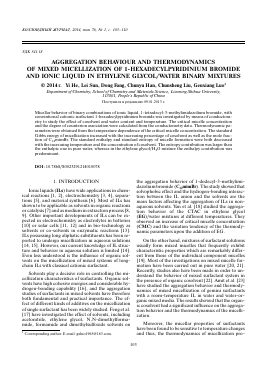 Micellar behavior of binary combinations of ionic liquid, 1-tetradecyl-3-methylimidazolium bromide, with conventional cationic surfactant 1-hexadecylpyridinium bromide was investigated by means of conductom-etry to study the effect of cosolvent and water content and temperature. The critical micelle concentration and the degree of counterion association were calculated from the conductometry data. Thermodynamic parameters were obtained from the temperature dependence of the critical micelle concentration. The standard Gibbs energy of micellization increased with the increasing percentage of cosolvent as well as the mole fraction of Ci4mimBr. The standard enthalpy and standard entropy of micelle formation were both decreased with the increasing temperature and the concentration of cosolvent. The entropy contribution was larger than the enthalpic one in pure water, whereas in the ethylene glycol/H2O mixture the enthalpy contribution was predominant.

Ionic liquids (ILs) have wide applications in chemical reactions [1, 2], electrochemistry [3, 4], separations [5], and material synthesis [6]. Most of ILs has shown to be applicable as solvents in organic reactions or catalysis [7] and as medium in extraction process [8, 9]. Other important developments of ILs can be expected in electrochemistry as electrolytes in batteries [10] or solar cells [11, 12] and in bio-technology as solvents or co-solvents in enzymatic reactions [13]. ILs possessing long aliphatic substituents has been reported to undergo micellization in aqueous solutions [14, 15]. However, our current knowledge of IL structure and behavior in aqueous solution is limited [14]. Even less understood is the influence of organic solvents on the micellization of mixed systems of long-chain ILs with classical cationic surfactant.

Solvents play a decisive role in controlling the micellization characteristics of surfactants. Organic solvents have high cohesive energies and considerable hydrogen-bonding capability [16], and the aggregation studies of surfactants in mixed solvents have therefore both fundamental and practical importance. The effect of different kinds of additives on the micellization of single surfactant has been widely studied. Feng et al. [17] have investigated the effect of solvents, including acetonitrile, ethylene glycol, N,N-dimethylforma-mide, formamide and dimethylsulfoxide solvents on

the aggregation behavior of 1-dodecyl-3-methylimi-dazolium bromide (C12mimBr). The study showed that solvophobic effect and the hydrogen-bonding interaction between the IL anion and the solvents are the main factors affecting the aggregation of ILs in nonaqueous solvents. Yan et al. [18] studied the aggregation behavior of the CTAC in ethylene glycol (EG)/water mixtures at different temperatures. They observed an increase of critical micelle concentration (CMC) and the variation tendency of the thermodynamic parameters upon the addition of EG.

On the other hand, mixtures of surfactant solutions usually form mixed micelles that frequently exhibit characteristic properties which are remarkably different from those of the individual component micelles [19]. Most of the investigations on mixed micelle formation have been carried out in pure water [20, 21]. Recently, studies also have been made in order to understand the behavior of mixed surfactant system in the presence of organic cosolvent [22]. Amit et al. [23] have studied the aggregation behavior and thermodynamics of mixed micellization of gemini surfactants with a room-temperature IL in water and water-organic mixed media. The results showed that the organic cosolvent had a significant influence on the aggregation behavior and the thermodynamics of the micelli-zation.

Moreover, the micellar properties of surfactants have been found to be sensitive to temperature changes and thus, the thermodynamics of micellization pro-

cesses has received much attention [24, 25]. Studies aimed at temperature dependence of the thermodynamic parameters are powerful means to elucidate the micellization process.

In this paper, we present an investigation about the effect of addition of EG and the temperature change on micellization of the mixture of 1-tetradecyl-3-me-thylimidazolium bromide (C14mimBr) and 1-hexade-cylpyridinium bromide (CPB). Thermodynamic parameters (Ac, AHm and A^m) for the micelle formation obtained from the temperature dependence of the CMC and the degree of counterion binding are also reported. It is expected that the results would provide some useful information needed for the theoretical analysis of ILs in more complex systems.

Ethylene glycol was purchased from Dongxing Company, Shenyang. 1-Methylimidazole and CPB were purchased from a Johnson Matthey Company, Lancs. 1-Bromotetradecane was purchased from Beijing Jinlong Chemical Reagent Co. All of the above reagents were of analytical grade and used as received without further purification. Triply distilled water from an SYZ-A Quartz sub-boiling distillation apparatus was used for the preparation of solutions.

necked flask with a reflux condenser for 12 h at 343.15—353.15 K under N2 atmosphere and then cooled to room temperature. The resulting product was recrystallized three times from ethyl acetate to remove any unreacted compounds, thereafter dried for 8 h under reduced pressure at 333 K to yield white cer-aceous solid. The compound was analyzed by 1H NMR, and FT-IR spectroscopy. The spectral data are consistent with the structure expected.

CMC is the most useful parameter for characterizing surfactants, since at this point many important properties of surfactants usually change sharply in the solutions. The conductivities of the C14mimBr/CPB mixture in a series ofEG/water samples were investigated at temperatures from 298.15 K to 318.15 K. In Fig. 1, the variation of the specific conductivity (a) against total surfactant concentration for C14mimBr/CPB mixed system has been plotted.

According to Rubingh's regular solution theory for mixed micelles [18], the CMC (C12) for C14mimBr/CPB system is given by the Eq. (1),

where ax is the mole fraction of C14mimBr in the total mixed solution andf and f2 are the activity coefficients of C14mimBr and CPB in mixed micelle. C1

Fig. 2. Plots of CMC versus the mole fraction of C14mimBr in C^mimBr/CPB mixtures dissolved in pure water at 298.15 K: (1) experimental curve and (2) theoretical curve modeled by Eq. (2).

and C2 are the CMCs of each surfactant, C14mimBr and CPB, respectively.

In Fig. 2, we can see that the experimental values show negative deviations from the values given by Eq. 2 illustrating the non-ideality of C14mimBr/CPB mixture in water at 298.15 K. Similar plots can be found in other cases.

The CMC values of the binary mixtures of surfactants in aqueous solution with different volume fraction of EG in water and at temperatures ranged from 298.15 K to 318.15 K determined from conductivity measurements are listed in Table 1.

From the data in Table 1, one can see that the CMCs of the binary mixtures with varied ratio of c