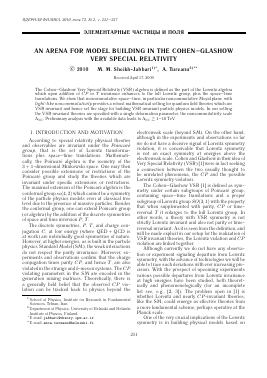 AN ARENA FOR MODEL BUILDING IN THE COHEN-GLASHOW

The Cohen—Glashow Very Special Relativity (VSR) algebra is defined as the part of the Lorentz algebra which upon addition of CP or T invariance enhances to the full Lorentz group, plus the space—time translations. We show that noncommutative space—time, in particular noncommutative Moyal plane, with light-like noncommutativity provides a robust mathematical setting for quantum field theories which are VSR invariant and hence set the stage for building VSR invariant particle physics models. In our setting the VSR invariant theories are specified with a single deformation parameter, the noncommutativity scale Лмс. Preliminary analysis with the available data leads to Лмс > 1—10 TeV.

According to special relativity physical theories and observables are invariant under the Poincare group, that is the set of Lorentz transformations plus space—time translations. Mathematically, the Poincare algebra is the isometry of the 3 + 1-dimensional Minkowski space. One may then consider possible extensions or restrictions of the Poincare group and study the theories which are invariant under specific extensions or restrictions. The maximal extension of the Poincare algebra is the conformal group so(4,2) which cannot be a symmetry of the particle physics models even at classical tree level due to the presence of massive particles. Besides the conformal group, one can extend Poincare group (or algebra) by the addition of the discrete symmetries of space and time inversion P, T.

The discrete symmetries, P, T, and charge conjugation C, at low energy (where QED + QCD is at work) are individually good symmetries of nature. However, at higher energies, as is built in the particle physics Standard Model (SM), the weak interactions do not respect the parity invariance. Moreover, experiments and observations confirm that the charge conjugation times parity CP, and hence T, are also violated in the strange and 6-meson systems. The CP violating parameters in the SM are encoded in the generation mixing matrices. Theoretically, there is a generally held belief that the observed CP violation can be tracked back to physics beyond the

1)School of Physics, Institute for Research in Fundamental

2)Department of Physics, University of Helsinki and Helsinki

The Cohen—Glashow VSR [1] is defined as symmetry under certain subgroups of Poincare group, containing space—time translations and a proper subgroup of Lorentz group SO(3,1) with the property that when supplemented with parity, CP or time-reversal T it enlarges to the full Lorentz group. In other words, a theory with VSR symmetry is not strictly Lorentz invariant and also not parity or time-reversal invariant. As it is seen from the definition, and will be made explicit in our setup for the realization of VSR invariant theories, the Lorentz violation and CP violation are linked together.

Although currently we do not have any observation or experiment signaling departure from Lorentz symmetry, with the advance of technologies we will be able to trace such deviations with ever increasing precision. With the prospect of upcoming experiments various possible departures from Lorentz invariance at high energies have been studied, both theoretically and phenomenologically (for an incomplete list see, e.g., [2, 3]). The problem open in [1] is whether Lorentz and nearly CP-invariant theories, like the SM, could emerge as effective theories from a more fundamental scheme, perhaps operative at the Planck scale.

In view of the above argument and recalling the fact that the observed elementary particles are neatly classified and described by the representations of Lorentz group, one possibility for resolving the "representation problem" is that the Lorentz-violating terms (the terms which reduce the symmetry of the Lagrangian to VSR) are added as perturbations to ordinary Lorentz-invariant Lagrangians and hence the theories have the usual matter content allowed by Lorentz invariance. However, such a realization of VSR may not be thought of as a "fundamental" or "master" theory which leads to Lorentz-invariant theories at low energies; this approach does not provide a firm theoretical setting for building the VSR-invariant theories.

Here we present an alternative way for resolving the "representation problem", paving the way for formulating VSR-invariant QFT. This could be achieved noting that one can include in the picture of symmetries not only the commutation relations defining an algebra, but also the action of the generators of the symmetry on the tensor product of their representation spaces (the so-called co-product). In more mathematical terms, the reasoning in terms of Lie groups/algebras can be extended to considering (deformed) Hopf algebras. In the framework of Hopf algebras, there are deformations which leave the commutation relations and structure constants of the algebra untouched, but affect other properties of the Hopf algebra, i.e., the co-algebra structure [4].

Since the commutation relations of generators are not deformed, it follows automatically that the Casimir operators are the same and the representation content of the deformed Hopf algebra is identical to the one of the undeformed algebra. On the other hand, the deformation of the co-algebra structure reduces the symmetry of the scheme. Such deformations are the twists introduced in [5], and are hence called "Drin-fel'd twist". Since the twisting reduces the symmetry, one may try to use the same concept to reduce the Lorentz symmetry to its VSR subgroups [6]. This is indeed the idea we are putting forward here to give a robust mathematical framework for constructing the VSR invariant theories.

This paper is prepared for the Proceedings of the G27 Mathematical Physics Conference, Yerevan 2008, and is based on [7].

2. THE COHEN-GLASHOW VSR: A BRIEF REVIEW

Energy-momentum conservation, and hence invariance under rigid space-time translations, should be preserved in VSR invariant theories. The minimal version of the VSR algebra contains, besides the generators of translations PM, the subgroup T(2) of the Lorentz group, which is generated by

where Ji and Ki (i = x,y,z) are, respectively, generators of rotations and boosts. It is then immediate to check that [Ti,T2] = 0 and hence T(2) is an Abelian subalgebra of Lorentz algebra so(1,3). Moreover, upon action of parity P,

and similarly under T. It is straightforward to see that the algebra obtained from T1, T2, TP, and Tp closes on the whole Lorentz group and therefore, T1,T2, P^ form (the smallest possible) VSR algebra.

The group T(2) can be identified with the translation group on a two-dimensional plane. The other larger versions of VSR are obtained by adding one or

two Lorentz generators to T(2), which have geometric realizations on the two-dimensional plane:

(i) E(2), the 3-parametric group of two-dimensional Euclidean motion, generated by Ti, T2, and Jz, with the structure:

(ii) HOM(2), the group of orientation-preserving similarity transformations, or homotheties, generated by Ti, T2, and Kz, with the structure