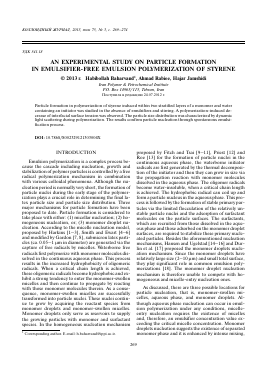 Particle formation in polymerization of styrene induced within two stratified layers of a monomer and water containing an initiator was studied in the absence of emulsifiers and stirring. A polymerization-induced decrease of interfacial surface tension was observed. The particle size distribution was characterized by dynamic light scattering during polymerization. The results confirm particle nucleation through spontaneous emulsi-fication process.

Emulsion polymerization is a complex process because the cascade including nucleation, growth and stabilization of polymer particles is controlled by a free radical polymerization mechanism in combination with various colloidal phenomena. Although the nucleation period is normally very short, the formation of particle nuclei during the early stage of the polymerization plays a crucial role in determining the final latex particle size and particle size distribution. Three major mechanisms for particle formation have been proposed to date. Particle formation is considered to take place with either: (1) micellar nucleation; (2) homogeneous nucleation, or; (3) monomer droplet nu-cleation. According to the micelle nucleation model, proposed by Harkins [1—3], Smith and Ewart [4—6] and modified by Gardon [7, 8], submicron latex particles (ca. 0.05—1 ^m in diameter) are generated via the capture of free radicals by micelles. Waterborne free radicals first polymerize with monomer molecules dissolved in the continuous aqueous phase. This process results in the increased hydrophobicity of oligomeric radicals. When a critical chain length is achieved, these oligomeric radicals become hydrophobic and exhibit a strong tendency to enter the monomer-swollen micelles and then continue to propagate by reacting with those monomer molecules therein. As a consequence, monomer-swollen micelles are successfully transformed into particle nuclei. These nuclei continue to grow by acquiring the reactant species from monomer droplets and monomer-swollen micelles. Monomer droplets only serve as reservoirs to supply the growing particles with monomer and surfactant species. In the homogeneous nucleation mechanism

proposed by Fitch and Tsai [9—11], Priest [12] and Roe [13] for the formation of particle nuclei in the continuous aqueous phase, the waterborne initiator radicals are first generated by the thermal decomposition of the initiator and then they can grow in size via the propagation reaction with monomer molecules dissolved in the aqueous phase. The oligomer radicals become water-insoluble, when a critical chain length is achieved. The hydrophobic radical can coil up and form a particle nucleus in the aqueous phase. This process is followed by the formation of stable primary particles via the limited flocculation of the relatively unstable particle nuclei and the adsorption of surfactant molecules on the particle surfaces. The surfactants, which are recruited from those dissolved in the aqueous phase and those adsorbed on the monomer droplet surfaces, are required to stabilize these primary nucleated particles. Besides the aforementioned nucleation mechanisms, Hansen and Ugelstad [14—16] and Dur-lin et al. [17] proposed the monomer droplets nucleation mechanism. Since the monomer droplets have relatively large size (2—10 ^m) and small total surface, they play significant role in common emulsion polymerizations [18]. The monomer droplet nucleation mechanism is therefore unable to compete with homogeneous and micelle-entry nucleation ones.

As discussed, there are three possible locations for particle nucleation, that is, monomer-swollen micelles, aqueous phase, and monomer droplets. Although aqueous phase nucleation can occur in emulsion polymerization under any conditions, micelle-entry nucleation requires the existence of micelles and, therefore, an emulsifier concentration value exceeding the critical micelle concentration. Monomer droplets nucleation suggests the existence of separated monomer phase and it is enhanced by intense mixing,

Fig. 1. The schematic illustrate the experimental protocol and the changes of system morphology with time. M and W specify the monomer and water phases, respectively, and S denotes the sampling syringe.

leading to an increase of total surface area of the monomer droplets.

In this work, we study the polymerization of styrene, which is a monomer of low solubility in the aqueous phase, within two stratified layers of monomer and water containing an initiator. The process was carried out in the absence of surfactants and no stirring was applied during the polymerization (Fig. 1).

Styrene (St) was supplied by Aldrich and was distilled under vacuum. The initiator, potassium persulfate (KPS), was obtained from Sigma and Fisher, and was used as received.

Two methods for determination of interfacial tension (ct12) by means of Kruss devices (Germany) were used to characterize the thermodynamic state of the interface layers [19—21]. The first one was the Wil-helmy plate method (the measurement accuracy according to manufacturer was ±0.1 mN/m; a platinum alloy plate (20 x 10 x 0.3 mm)) with a rough surface was used. The experiments were carried out at a St : water volume ratio of1 : 2 in the presence of1% of KPS relative to monomer weight. The second one was the spinning drop method, used for St:water ratio of 1 : 100 in the presence of 2% of KPS. The surface tension was determined by Wilhelmy plate method. The molecular mass distribution of polymerization products was determined by high-performance liquid chromatography (HPLC). A PL gel in 10 | Mixed-B column (Hewlett Packard) equipped with appropriate pre-col-umn and a PUMP P-500 (Pharmacia) were used in this study; and Hp-1047A differential flow refracto-meter (X = 640 nm, Hewlett Packard) was used as detector. The changes in aqueous phase during polymerization process were characterized by measuring the pH with a pH-meter equipped with a glass electrode.

Polymerization was carried out in a 500 mL glass vessel equipped with a heating jacket. The temperature of the reactor content was controlled with ±0.5°C accuracy by water pumped through the jacket. All of the ingredients were separately purged with nitrogen for 30 min and then transferred to the reactor, which was kept under nitrogen. The schematic of the experimental set up is shown in Fig. 1.

The reaction vessel was initially charged with an aqueous solution of initiator. Then the monomer was gently placed over the water phase. The temperature of the reacton was controlled by circulation of water through the jacket. Sampling was carried out by withdrawing the aqueous solution using a long hypodermic syringe. The tip of the syringe during the sampling was 1 cm above the vessel bottom. In general, the repro-ducibility of the experimental data was satisfactory. The inhibition effect was observed due to the traces of dissolved oxygen and impurities in the aqueous phase.

According to the literature data, the surface of particles formed during the polymerization of St contains

SO4- end groups and OH groups resulting from the hydrolysis of initiator. Possible radical reactions in the aqueous phase are usually presented as follows:

AN EXPERIMENTAL STUDY ON PARTICLE FORMATION

Fig. 2. Time dependence of the pH in the aqueous phase during the St polymerization.

Fig. 3. Influence of polymerization time on the surface tension of an aqueous phase. Measurements were carried out at 60°C; KPS concentration was of 1%.

Since the concentration of St in water is low (the solubility of St in the aqueous phase is 4 x 10-3 mol/L), the reactions (2) and (5) can compete with each other. The following reactions occur with the participation of hydroxyl radicals:

The results (Fig. 3) are indicative of significant decrease in pH of the system during the first 50—60 min after the onset of