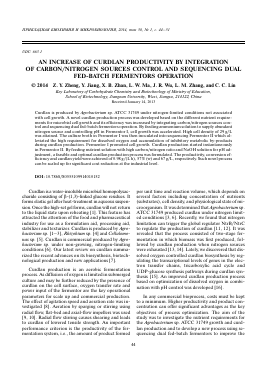 Curdlan is produced by Agrobacterium sp. ATCC 31749 under nitrogen-limited conditions not associated with cell growth. A novel curdlan production process was developed based on the different nutrient requirements for microbial cell growth and its efficiency was increased by integrating carbon/nitrogen sources control and sequencing dual fed-batch fermentors operation. By feeding ammonium solution to supply abundant nitrogen source and controlling pH in Fermentor I, cell growth was accelerated. High cell density of 29 g/L was attained. The culture broth in Fermentor I was then inoculated into sequencing Fermentor II which alleviated the high requirement for dissolved oxygen and accumulation of inhibitory metabolic by-products during curdlan production. Fermentor I promoted cell growth. Curdlan production started instantaneously in Fermentor II. By feeding nutrient solution with high carbon/nitrogen ratio and NaOH solution for pH adjustment, a feasible and optimal curdlan production process was formulated. The productivity, conversion efficiency and curdlan yield were achieved of 0.98 g/(L h), 57% (w) and 67 g/L, respectively. Such novel process can be scaled up for significant cost reduction at the industrial level.

Curdlan is a water-insoluble microbial homopolysac-charide consisting of P-(1,3)-linked glucose residues. It forms elastic gel after heat-treatment in aqueous suspension. Once the high-set gel forms, curdlan will not return to the liquid state upon reheating [1]. This feature has attracted the attention of the food and pharmaceutical industry for use as a formulation aid, processing aid, stabilizer and texturizer. Curdlan is produced by Agro-bacterium sp. [1—3], Rhizobium sp. [4] and Cellulomo-nas sp. [5]. Curdlan is commercial produced by Agro-bacterium sp. under non-growing, nitrogen-limiting conditions [6]. Our latest review on curdlan summarized the recent advances on its biosynthesis, biotech-nological production and new applications [7].

Curdlan production is an aerobic fermentation process. As diffusion of oxygen is limited in submerged culture and may be further reduced by the presence of curdlan on the cell surface, oxygen transfer rate and power input of the fermentor are the key operational parameters for scale up and commercial production. The effect of agitation speed and aeration rate was investigated [8]. Aeration by sparging or stirring using radial flow, flat-bed and axial-flow impellers was used [9, 10]. Radial flow stirring causes shearing and leads to curdlan of lowered tensile strength. An important performance criterion is the productivity of the fermentation system, i.e., the amount of product formed

per unit time and reaction volume, which depends on several factors including concentration of nutrients (substrates), cell density, and physiological state of microorganism. It was determined that Agrobacterium sp. ATCC 31749 produced curdlan under nitrogen limited conditions [3, 6]. Recently, we found that nitrogen limitation can trigger the global regulator NtrB/NtrC to regulate the production of curdlan [11, 12]. It was revealed that the process consisted of two-stage fermentation in which biomass was first produced, followed by curdlan production when nitrogen sources were exhausted [13, 14]. Lately, we discovered that dissolved oxygen controlled curdlan biosynthesis by regulating the transcriptional levels of genes in the electron transfer chains, tricarboxylic acid cycle and UDP-glucose synthesis pathways during curdlan synthesis [15]. An improved curdlan production process based on optimization of dissolved oxygen in combination with pH control was developed [16].

In any commercial bioprocess, costs must be kept to a minimum. Higher productivity and product concentration can offer significant advantages as the key objectives of process optimization. The aim of the study was to investigate the nutrient requirements for the Agrobacterium sp. ATCC 31749 growth and curd-lan production and to develop a new process using sequencing dual fed-batch fermentors to improve the

productivity of curdlan by controlling cell viability and oxygen transfer rate specific for its production.

Bacterium and seed culture conditions. The curd-lan-producing strain Agrobacterium sp. ATCC 31749 obtained from American Type Culture Collection (USA) was used in the study. Seed medium consisted of (g/L): glucose - 20; yeast extract - 10; KH2PO4 -1.74 and MgSO4 • 7H2O - 0.5. The initial pH of the medium was adjusted to 7.0 with 1.0 M NaOH. The seed culture was grown in 250 mL flask containing 60 mL of seed medium shaken at 200 rpm and 30°C for 18 h. The seed culture was harvested for the use of two-stage flask cultivation and sequencing dual fed-batch fer-mentors operation as described below.

Composition of growth media and sequencing dual fed-batch fermentors operation. The compositions of all the growth media used are shown in Table 1. A two-stage culture method was employed for flask cultures. For test A, a 5% (v/v) of inoculum was added directly into medium A containing yeast extract and NH4Cl. For tests B, C and D, the inocula were centrifuged, washed with sterilized water and then added to final biomass concentration of 2.0 g/L in medium B, C and D, respectively. Medium B contained yeast extract while medium C had NH4Cl as the sole nitrogen source. Medium D contained no nitrogen source. The initial pH of all media was adjusted to 7.0 with 1.0 M NaOH. The second stage of cultivation was carried out at 30°C in a rotary shaker at 200 rpm for 60 h.

The sequencing dual fed-batch fermentors operation was conducted in two laboratory-scale fermentors operated in the sequence of cell growth and curdlan production phases. The Fermentor I was operated with a 15-L stirred tank fermentor (Biostat C10-3, B. Braun, Germany) filled with 10-L ofmedium E (Table 1).

The seed culture was harvested and inoculated into Fermentor I with 10% (v/v). The pH was maintained at 7.0 by adding 10% (w/v) of aqueous solution of ammonia and the temperature was controlled at 30°C. Aeration was maintained by injecting air at a rate of1.5 vvm. After glucose was nearly exhausted, concentrated solution of glucose (400 g/L) was added at a constant rate of 120 mL /h. Dissolved oxygen was maintained manually at above 10% of air saturation by adjusting the agitation speed. When the process of high cell density cultivation in Fermentor I was completed, the concentrated biomass was inoculated into Fermentor II which was filled with the medium F (Table 1) in advance in a 25-l fermentor (NLF22, Bioengineering AG, Switzerland). The inoculation volume of the broth from Fermentor I into Fermentor II was calculated and adjusted according to the cell density in Fer-mentor I, volume of medium F in Fermentor II and a preset value of the cell density in Fementor II. The pH was maintained at 5.6 in Fermentor II by controlled addition of 3.0 M HCl or 3.0 M NaOH. Temperature was controlled at 30°C. In order to supply the substrate for curdlan production in Fermentor II, concentrated solution of glucose (400 g/L) without nitrogen source was fed at a constant rate of1.5 g-glucose/(L h). Dissolved oxygen was maintained automatically at above 20% of air saturation by controlling the agitation speed up to 1,000 rpm and aeration rate was set at 1.0 vvm.

Analytical methods. The biomass and curdlan yield were determined by the dry weight method. Broth samples were centrifuged at 8,000 g for 15 min at 4°C. The supernatants were collected for the determination of residual glucose and NH4Cl. The pellets containing cells and curdlan were resuspended in 0.1 M NaOH and mechanically agitated for 1 h to solubilize the cur-dlan precipitate. Cells were pelleted by centrifugation at 12,000 g for 30 min. Subsequently, the curdlan in the supernatant was precipitated by the addition of

Fig. 1. Effect of yeast extract addition (medium A and B) on curdlan production by the Agrobacterium sp. ATCC 31749 cells in the second stage of the two-stage flask cultivation. The detail composition of medium A, B, C and D was shown in Table 1. 1 — curdlan concentration, g/L; 2 — biomass concentration, g/L; 3 — final pH.

2.0 M HCl and centrifuged at 8,000 g for 15 min. The cells and curdlan were washed with deionized water and then dried to a constant weight at 80°C.

The residual glucose was determined by the dinit-rosalicylic acid method [17] and the residual NH4Cl was assayed by the indophenol blue method [18]. For the determination of the acetate and 2-oxoglutarate in the fermentation broth, 1.0 mL of culture was centrifuged at 8,000 g for 15 min and the supernatant was then filtered through a 0.22 ^m syringe filter for HPLC analysis. The HPLC system (Agilent 1100 Systems, USA) was equipped with a column (ZORBAX SB-Aq: 150 mm x 4.6 mm x 5 ^m). The variable wavelength UV det